It took 3 hours (with my 611!) of cutting these dominoes from scrap maple hardwood flooring, but now my in-laws have a nice set to play with. I sent the whole boards home with them so they get the joy of sanding the edges… 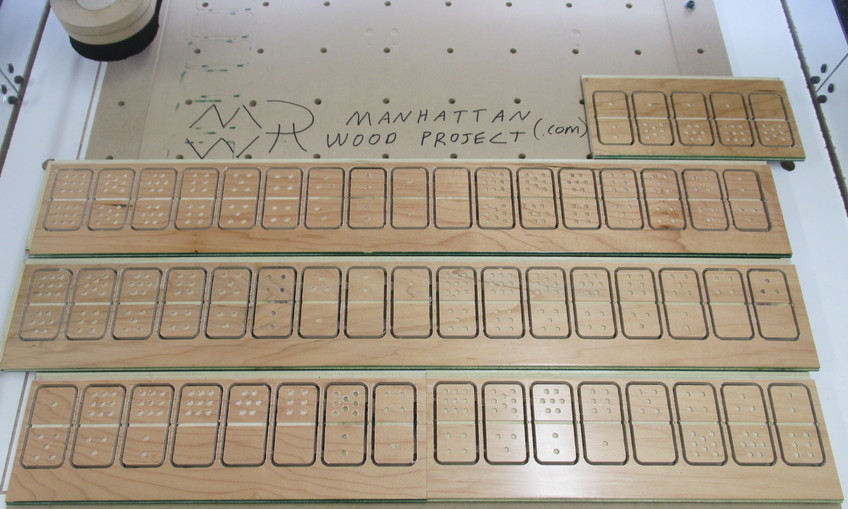 This is s really cool idea. If you paint both sides and then carve the dots would contrast more with the black.

You would need to touch up the sides though since it would be carved out so it might not be worth it if there is already good contrast.

How did you think of this idea?

Thanks! Painting both sides would definitely be good for material that isn’t already finished. We were thinking about putting drops of acrylic paint in each of the dots too (enamel may bleed along the grain), but there wasn’t time before I gave them away.

My mother-in-law loved the concentration project I did on Wednesday and suggested I make dominoes at some point. She didn’t think I’d jump on it immediately though.

I made some 0-6 Dominoes at work, without the dots. Now that I have the xcarve at home, I can do whatever I want, lol. In what program did you designed these. I want to try to make me a set 0-6 . Did you used Easel for it? They look really nice by the way! Keep up the good work.

That is really awesome. I build a lot of furniture projects with reclaimed and new flooring and this is a really cool take on it.

Thanks! These were made completely in Easel, it should be easy enough to pick out the 27 dominoes that have 7,8, and 9 on them if you want to make a set of just 0-6.

Thank you! I have about 3 boxes of flooring scraps after redoing the house a couple years ago, so it’s definitely nice to be able to finally use them for something.

I’d recommend getting an old soldering iron and trying to burn the holes in for that contrast. That’d look nice.

Hmmm, I like the burning idea. I will have to give that a try with one of my 30W soldering irons and a big flat or blade tip.

Another great project! I may emulate this for a Christmas present! Thanks!

The set from 0-6 are different size and the set up of the dots are different. But I started to make it last night. And you were right, its pretty easy to do on Easel, thanks for sharing!