I decided to do a little testing to find the right speeds and feeds in MDF for two of the bits that Inventables sells. I started at 1/2 diameter depth and played around until I got decent shavings amidst the dust, and no chatter. Got some interesting results.

The spindle is the stock 24V spindle, with Easel set to control spindle control automatically at 12,000 RPM.

I just cut two doors for my cart from 3/4" MDF with the ball end mill, which went pretty quick now that I have the speed and depth dialed in. I let it trim 0.120" off of one end to ensure it was square, here’s what the shavings and cut looked like: 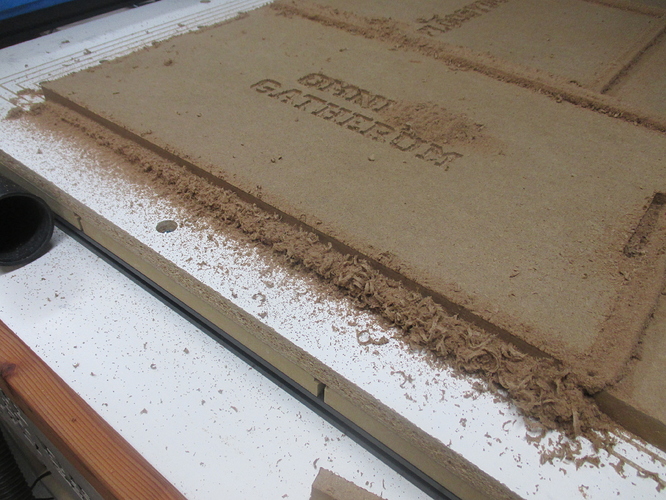 The edges were pretty rough on the letters, but nothing a few minutes with some small files or sandpaper won’t fix: 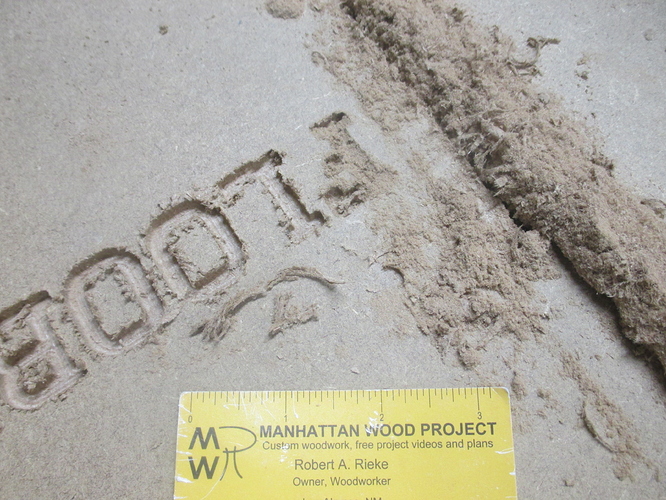 I though it was really interesting that the two bits have such different cut depths and speeds, and it explains why I broke the straight flute bits every time I tried to use the Easel default settings. Does anyone else have any solid test results for specific bits and material for the 24V spindle?

I had just doing some research on the exact topic! I found an equation that worked great. After a few iteration back and forth I came up with the following setting.

Cut come out great, slight fray on the top edge but nothing a quick sanding doesn’t take care of. I’ll try to post some photos late as well as go into a bit more detail if you would like!

Rusty, are you under the impression that the 24v spindle is actually rotating at the RPM set in Easel? Or are you measuring the RPM with a tachometer? The RPMs that are sent from Easel do not bear any resemblance to reality - especially over time and under ANY load (like cutting).

Also, a straight flute or down cut will eliminate that frayed edge, but if it is too slow you could interrupt the job after the first pass or two and change bits.

@EarwiggerIif you meant me instead of Rusty, I’m definitely aware that the spindle RPM is a random number much lower than 12k. In order to define the test parameters, and to allow others to do the same, I figured it would be good to have a common setting anyway. I’m adding a huge fudge factor to my calculations since the RPM’s are so far off, and am choosing the best speed from where it transitions from “just dust” to “dust and good shavings”.

Doing the first couple passes with the straight flute is a good idea, I’ll have to try that after I get comfortable with changing bits without inadvertantly moving the gantry or X-carriage. It seems to be an art that I have yet to learn, even with the motors locked.

I was assuming that when I set the RPM in Easel that was the RPM I would be getting. When do we stop trusting! It would be exhausting to questions everything! If I kept having issues, I probably would start looking into that, but I set the parameters in Easel and my result are great! 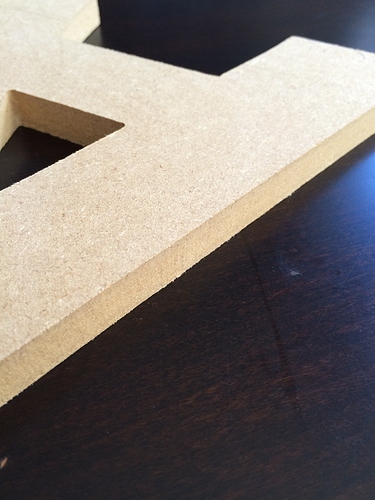 My chips are pretty good I think, combination of actual shavings and saw dust. The picture above is with no sanding on the edge, just a slight sand on the top to knock off the fray. I’ve tried a straight flute before and could never get a great result with it, the single flute uncut, for me at least, seems to produce the best finish with my current set up.

I think once I upgrade my spindle the last of the edge imperfection will disappear. I’m pretty sure that the current imperfections (very slight and hardly noticeable) are from run out. I can hear ever so slightly that the bit vibrates a bit while cutting. I was originally cutting at 13000 RPM (take that as you will) and at 65ipm, but once I recalculate for a slower feed rate I came up with the numbers above!

That is a beautiful finish. I think you got it pretty dialed in!

Thanks you! I still get a bit of roughness on radiuses (radii?) but I think that’s due to run out still. I could slow my feed rate down a bit more but I’ll like to finish some projects while I’m still young!

For now, until I get a new spindle, I think I can live with what I got!

You will be amazed when you upgrade. The type of bit will be less of an issue and your DOC will increase signficantly. Then as a rule: Upcuts make good bottom edges and smooth pockets. Down cuts make good top edge and ok bottom because it is against the spoil board. Straight bit does a fair job of both.and does not draw the spindle down into the work or constantly try to push the spindle up out of the work - great for unmodified machines.

Upcut is easiest on the spindle because of chip clearing. Chip on.

I don’t mean to hijack this thread, but I thought this would be the most appropriate place to post this. I started upping my DOC the other day and started noticing some slight steps in my edge near the bottom. I looked back at some cuts that I did at 0.03 and the was ever so slightly some steps in the cut.

They are pretty minimal. but I’m just trying to hammer this done and attempt to get the most efficient cuts. I’m curious what everyone thinks, could this be due to run out? I already feel my stepper pots are adjusted a bit too high, so I don’t think that is it. I did receive a replacement spindle, so maybe this is due electrical interference.

I found a alright middle ground, using 0.06" DOC cuts my time in half and the imperfection in the cut are minimal.

Let me know what you guys think!

Is the z axis truly perpendicular to the wasteboard, both side-to-side and front-to-back?

That would be some pretty significant runout if it’s noticeable in 0.030" cuts.

Ya, I forgot to mention that, the spindle is square in both directions. I think it’s in all direction, but it’s not consistent which is why I’m thinking it’s runout.

I read about checking runout on the router/spindle itself. If you have a dial indicator and a broken bit (or one with a long shaft), you can do that.

I’ll have to check this out. I’m planning on upgrade fairly soon, so it might be a non-issue. Thanks for the info! Did you get your feeds and speeds figured out?

Only for 3/4 MDF, and only for those two bits. Workwork, housework, and schoolwork is eating up WAY too much of my time.