Defiantly want to know how well this laser works.

i been think of getting a laser for my x-carve but haven’t decide what is the best choices 5W from 15W.

It’s working great even without the JTech firmware. My previous laser was a 2.8w, so I’m having to spend a lot of effort to determine the best feed and power settings for various operations, but so far, I’m thrilled. 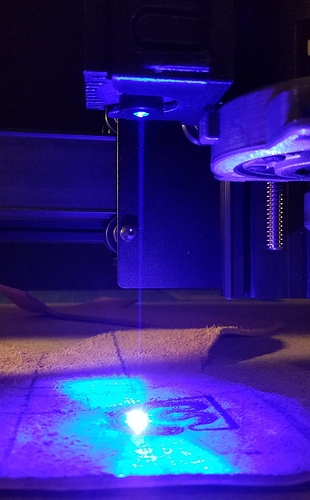 Very nice. This seems like a less expensive option than the Jtech. Am I correct on that or are there other components needed to buy? You said this works without the jtech firmware? So it does work with the original x carve arduino shield set up? Ihave been wanting to get a laser but hesitant about messing with firm ware.
Also can you tell us what software and g code sender you Plan on using. Unfortunately I have never been able to get UGS to work on my laptop.

I have published X-Carve mounts for the laser, controller and power supply on Thingiverse

Although I wouldn’t trust using those goggles. Might want to pick up a real pair to protect your eyes.

I hope this laser system works out better than the JTech, as it is so much more affordable. Thanks again!

Does this work with the original x carve ardino shield set up. I would like to get this laser. Use Pic engrave software. Send g code via easle or UGS. I do Not want to mess with firm ware as I am afraid I will permanently mess something up. Is this possible or am I dreaming?

I agree that there are advanced features in some of the GRBL releases, but I’ve been using the stock 1.0c GRBL that came with my X-Controller and I’m very happy with the results. I believe I could get improvements using the laser-enhanced GRBL releases, but for the cutting/burning I’m doing, stock does the job as well as the special GRBL release that came on my custom 2.5W gantry laser.

There’s nothing I can find in the stock GRBL that keeps the laser from working. M3 Sxxx is on with the S value being the PWM laser power level and M5 is off. I reset my $30 and $31 to 255 and 0. Other aspects of GRBL are enhancements to improve the power level management over the toolpath. But it’s not essential (I do think it’s a good idea though.)

I’m actually building a full area shield. Even with my (other) better pair of laser safety glasses, there is incident reflection and carelessness on my part. This laser is bright!

I’m using a program called T2Laser to generate (most) of my toolpaths. Any sender will send the resulting G-code file. I like UGS, but Easel should load and send the file as well.

Thanks. Perhaps I will just try it. Then learn what I need to do if It doesn’t work. Thats seems how I have done most things with this machine so far.
I realy liked that thread with all the pic engraver projects. Really high quality photo like images I think is my goal for using the laser. And etching mirrors. Genius.

Since most of you do not have laser power meter I just wanted to give you some information below.

Stongest available blue laser diode on the market is NUBM44 with the power of 6W.

All Chinese suppliers sell the same lookign laser modules with different powers 6W 7W 10W or 15W. All of this is fake and I can sign myself this statement.

Diode efficiency is given in W/A so how many Watts it can give when 1A current is flowing.
Blue diodes have better efficiency which reaches 1,5 W/A in some circumstances. It is not possible to reach 10 or 15W with the CW diodes. In the auctions you can see many times that current is 1 - 3 A for example. Also 6A would kill this diode imidiatelly.

Stongest available blue laser diode on the market is NUBM44 with the power of 6W.

Can this diode run continuously at 4 amps without damage or shortening the life of the diode?

Ah, herein lies the rub. Indeed I find that the laser will only run at 100% power for about 10 minutes before both it and the power unit overheat. The laser looses power as the temp exceeds the critical point until it is in the sub 1W (I’m guessing) range.

Additional cooling (more fans, better airflow,) helps extend this period. Better yet is to run the unit at lower power where it can run many times longer. The primary reason I sprung for the 15W is so that I could run it at 1/4 power and still have a more powerful laser than the 2.5W laser I was using.

Personally, I just don’t view this as a significant cutting or metal etching laser. I use it for burn engraving wood, leather and plastic and it’s great. Small cutting jobs, or jobs broken into sections that allow cooling periods, or multiple passes at reduced power are how I handle the (primarily leather) cutting I do.

Not really. Casio is usind 3,4A in their projectors. Hard to say how long they can take 4A, At 3,4A they give usually 6,2W so a little more than we expect.

Blue diodes have better efficiency which reaches 1,5 W/A in some circumstances

These statements seem to contradict one another.

How is this laser holding up?
I’m looking to upgrade from my 2.8 watt jtech laser and this seems too good to be true, considering the price of the tech 7 watt.

Sorry I missed this when you posted!

The laser has held up well, though to be fair it gets only occasional light use. I also rarely run it at full power (I PWM modulate it.) My intent is to actually consider it a stout 5W laser since almost all the diode lasers end up putting out less than the ‘rated’ amount and I always want to run at fractional power most of the time.

Right now, there is one, real 15W of optical power laser on the market.