I was able to get my machine up and running this morning and start playing with / tuning the machine.

Here are my first efforts - I can tell I am going to have a lot of fun with this machine! 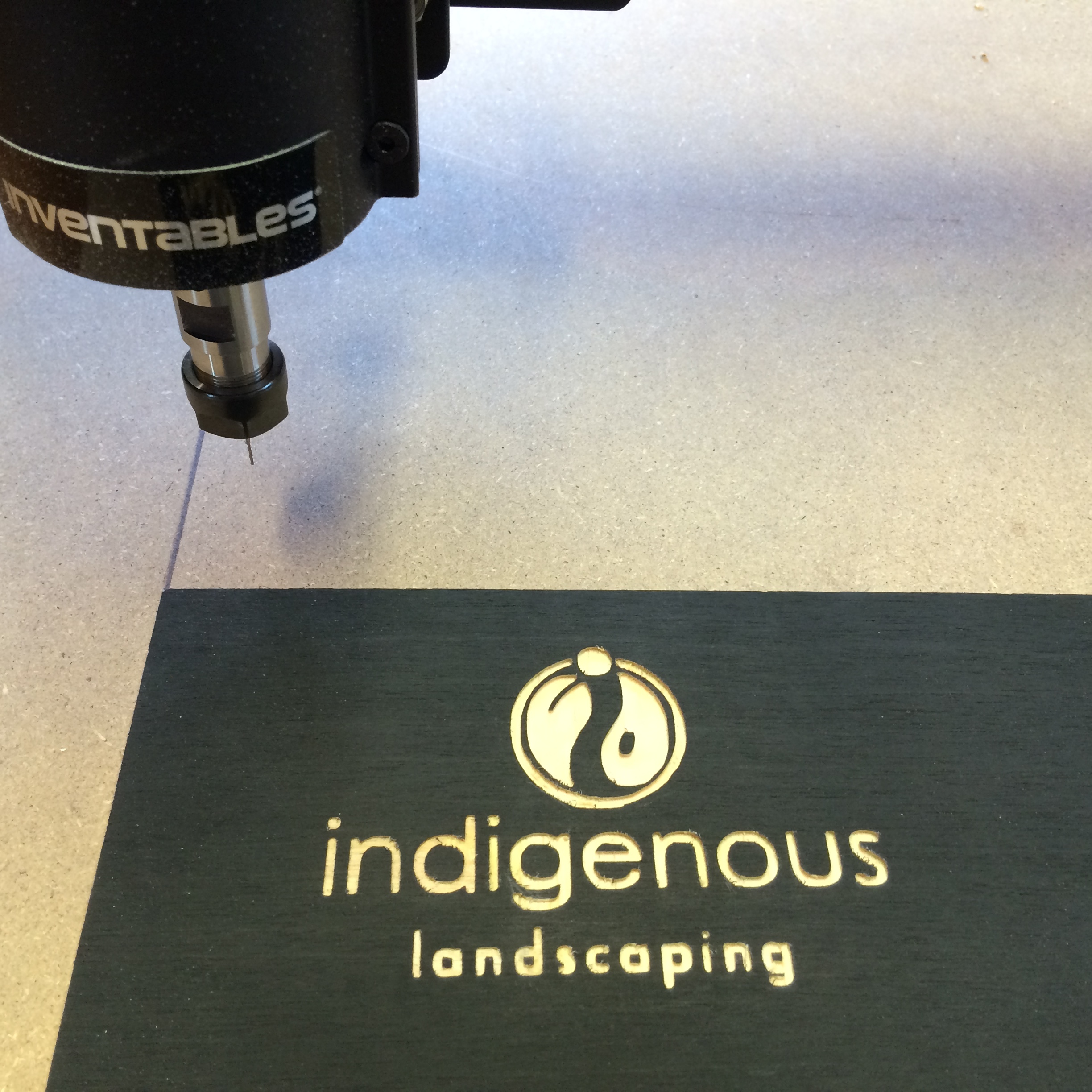 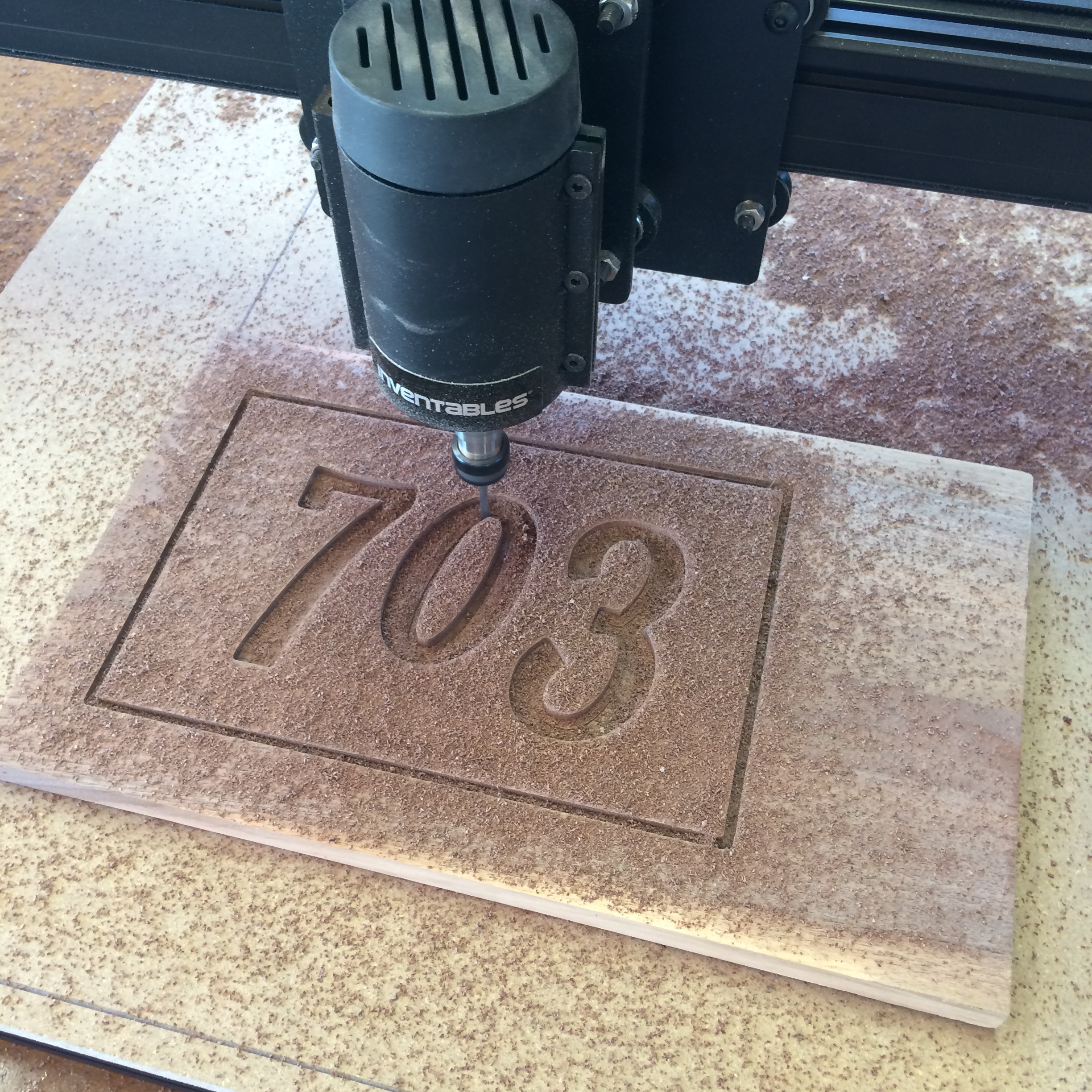 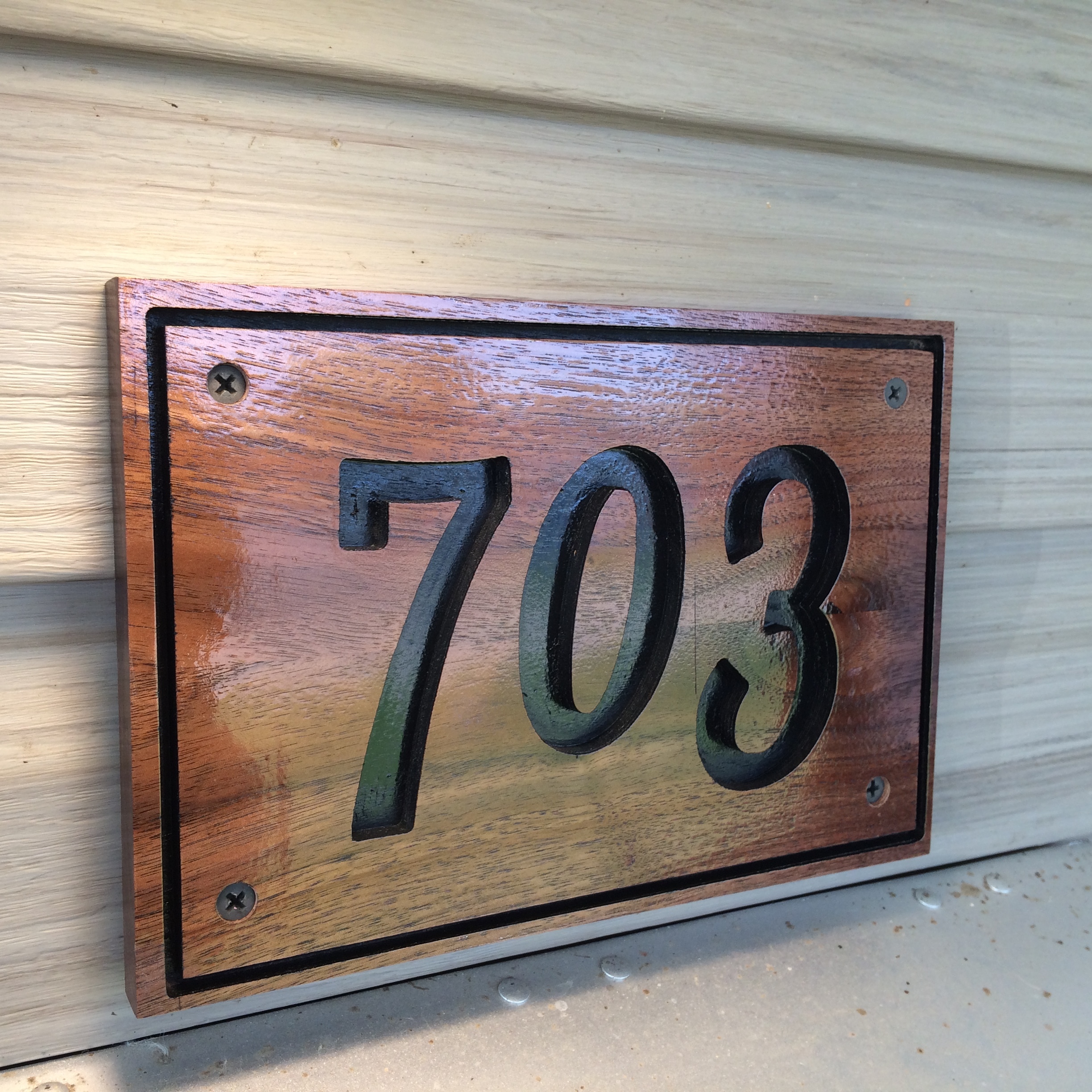 Way too cool. How long did it take you in total from unboxing to making the first cut?

Very nice, can you provide details about the software and the end mill you used?

I worked on building the machine over the course of a couple nights and finished up yesterday morning.

I would guess around 6-8 hours of build time and playing to get things tuned in.

Both of these were done using Easel. Ive started messing with F-Engrave and ChiliPeppr to do some V-Carving, I will post some results of that soon.

The logo was converted to SVG using Inkscape and imported into easel. I used the 1/32" FishTail that comes in the 5 mill starter package. The total size of this one is less than 2". The small bit worked perfect for getting the details. The board was a piece of 1/4 plywood that I painted black.

The house numbers were layed out in Easel - and cut as a fill down to about 1/4" deep on solid walnut. I used an 1/8" dual flute flat end mill for that cut. Painted the numbers and edge detail and sanded off the sloppy painting parts before a couple coats of spray lacquer.

Looking forward to seeing what others come up with!

Thank you for details. It is very encouraging to see projects completed with Easel and the end mills in the starter package.

Please let us know if you make any progress with F-Engrave, I have tried it a few times and each time it has defeated my efforts to produce useable Gcode. I am about to break down and purchase ArtCam Express.

I was able to get code which would run, but most of my efforts don’t look very good. I think the stock spindle may be under-powered for any serious v-carving (or you have to run so slow that the bit burns the wood as it is spinning).

I will continue to experiment. Another thing to consider that is there is quite a bit of force in play when it plunges, my double sided tape method of securing the work was not cutting it…a clamping method would be more appropriate.

I am going to try and get one of the demo v-carving cuts from V-Carve Pro to work. Supposed to be able to run the test jobs from the tutorial. It would be nice to confirm that I am dealing with software vs. power/speed issues.

Nice work! What material did you select to get your feeds and speeds in Easel for the 1/32" FishTail?

I tried using that bit with MDF to carve the tractor image as a test and broke the bit.
I was using makercam to generate the G-code at that point and was using a feed rate of 30 in/minute
and plunge rate of 10 in/minute and a step down of 1/32".

@BlairHarp when we were experimenting we found that if we went too slow with the feed rate the spindle didn’t perform as well. We had better luck with a lower depth per pass and a faster feed rate.

What speeds and feeds were you using?

I can’t recall exactly now for all of my tests, but according to the last file I had open in F-Engrave it was 10 inch/min. The pass depth in F-Engrave is a bit strange, and I’m not confident that when I made changes for a max depth per pass it really helped. Most of the passes seemed to try and go to full depth in 1 pass. That is why I was curious to try something in another program. I will also be messing with using using jscut.org to generate V-Carve tool paths.

Getting a clean V in the bottom seemed to be the most troublesome…but I fear my double sided tape was the biggest issue there. I will be making a proper wasteboard with threaded inserts for clamps later this week.

I used the default speeds and depth per cut in Easel for that first attempt with it. I think that is 30 in/min and depth of cut of .028 (so about 1/2 of what you tried if my math is still working

). It worked great on that first cut yesterday…today I broke it in a piece of the same 1/4" plywood using the same setting…so im not sure? The bit broke during lateral movement not during a plunge.

I plan to pick up some more and do some more testing to get comfortable with how different bits react.

For the issue with the double-sided tape - are you using the right stuff? I’ve got a knee mill the size of a VW Beetle and I use double-sided tape to hold thin stock for machining. The carpet tape from Home Depot is not the stuff to use. It is too fat and the material to be milled/routed will sit up off the surface and flex sideways. You need the thin stuff. Woodcraft sells it if you’ve got one nearby. They sell it in two strengths and the cheaper, lighter strength is strong enough to do the job.

Thanks for the tip Joe - I was using the thinnest carpet tape I could find…I think it was 3M Brand but what you are describing with the sideways flex is exactly what I was seeing under a heavy load.

I will get some of the good stuff and try again!

Wow, that turned out great!

I found a nice explanation of how to use F Engrave with GRBL, I guess I should read the manual before starting.

I have had some feedback from ShapeOko users indicating that there are some issues using the default F-Engrave output with GRBL.  I thought I would take some time and describe the problems that peo…

The setting changes in your link were helpful for me to get some better results. Nothing spectacular yet…there are still some unexpected movements which I need to figure out. After changing these settings though, it did maintain the depth per pass settings and didn’t try to jam the bit to full depth on a single pass. Another thing I noticed is that if I created a file using another drawing program and convert to bitmap, it generates cleaner lines than if you use the text function of the program…not sure if anyone else on here has had any success yet? 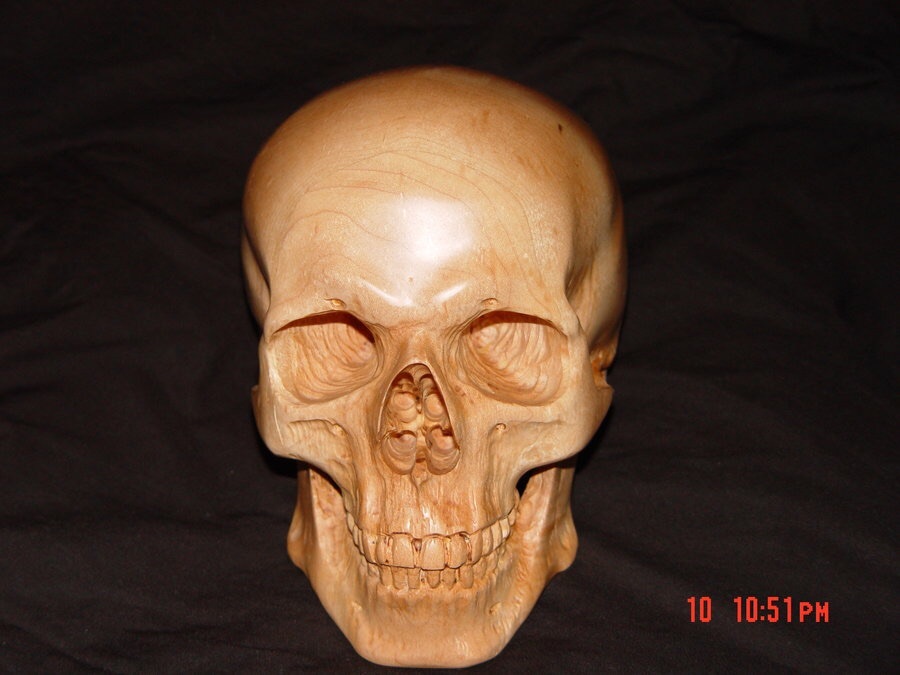 Would the machine be able to do work such as the photo posted, i realize that the entire skull would not be able, perhaps only the front 1/3 or 1/4 of the skull.
I look forward to any reply,
Many Thanks, hvae a great day,
Dog

If you have Vectric Aspire,
This video show you how to import a 3D model

Then you can use the slicing option.

I think this will get you excited.