I was asked to make a gift for a retiring friend…the request was for a shadow box to hold wine corks. Pretty pleased with how this turned out. 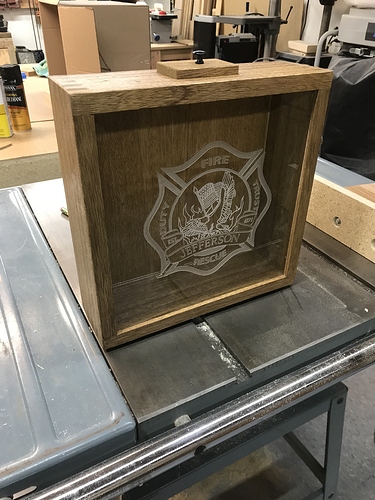 My X-Carve produced the engraved acrylic front better than I could have imagined possible.

I used cast acrylic. Everything I found during research said cast is better for milling operations.
I ended up setting up the project into three stages. the first stage was the border and I used a 2-flute straight upcut bit. The second stage was the text and I used a 3/16 spiral upcut, i think it was a 2 flute. The final stage was the center of the logo, the flag, eagle, and flames and I used the engraving bit for that stage.
I did have to slow the feed rate for the 3/16 bit. I got into the second letter and the bit snapped. I just reduced the feed rate by 50% and the rest worked fine.

It’s remarkable. Beautiful.
Did you do this on Easel or Vcarve?

Thanks!
Easle was the workhorse. All of the line work was done in Inkscape.

Akin to a waterfowler collecting bands, there are apparently some circles of folks that like to collect their corks… I already have requests for 3 more. Whoda thunk huh?

Cool thanks for sharing the bits and process you went through
I have snapped bits before on plastic.
One of the reasons I set out to get my wastboard as flat as possible.