Big day for me today. Was able to build a model in Fusion360 and create CAM paths for it. It was a steep learning curve, but did work out in the end. However, there is something I’ve noticed about the Fusion gcode that perplexes me. There is alot of ramped Z axis movement with tiny movements downward and my Z-Axis motor hates it. It grumbles every time one of the 3-axis operations comes along. I’ve tested plain jogging and up and down motions and there is no binding or problem with Easel generated code.

Are there some sweet-spot CAM settings to use when generating code from Fusion? I’m already using the Easel post-processor and it doesn’t seem to help.

Below are some pics of my 1st model. 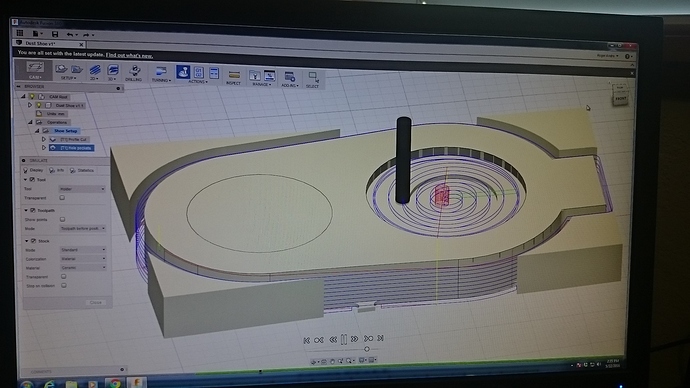 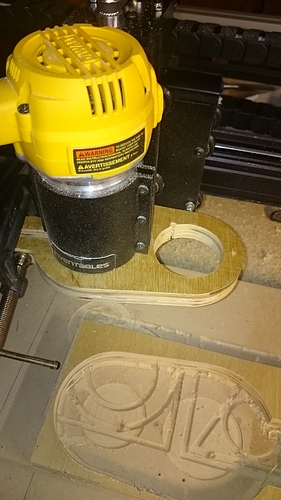 I am not in the shop at the moment But I too am learning fusion and believe me it only gets easier from here out you will pick it up pretty quick. The ramping moves can be changed. as far as I can tell the noise you hear is normal and dependant on the settings used. meanwhile here is a link to some cam tutorial vids that may be helpful
https://www.youtube.com/results?search_query=fusion+360+cam+setup

I notice a lot of noise from z axis when doing 3d carving and the z moves are small and frequent. Sounds like clanking. Had me worried for awhile but I think it is just the nature of the motor making small, frequent steps. Don’t have the noise with other carvings where the z moves are larger and less frequent.

Thanks for the feedback. I found an interesting post on the Autodesk forum about this. It talks bout how some, “Certain helical or arc geometries do not maintain a constant velocity and movements become slow and erratic.” It turns out that certain arcs and curves are being broken up into many short helical movements, instead of being smooth and continuous. I tested out their recommendations and did an air-carve this morning. The machine movements are much smoother now and Z-Axis grumbling is gone. Unfortunately this is because ramping is completely eliminated, which I don’t think is ideal. It does appear like these settings will work for plywood though and at least I won’t burn my bit now.

I will continue to experiment with the CAM settings in Fusion to see if I can refine them. This seems to be an area that could use ALOT of refinement in Fusion though. They don’t even have a “wood” material type to choose from, so everything is a guess. Hats off to the Easel devs for the work they did on material selection for cutting feedrates. Yes, they’re conservative, but they work pretty well right out of the box. My guess is that whenever Autodesk ends up putting in CAM settings for wood, they will be geared for larger production machines than ours and we’ll have to tweak them anyhow. It would be nice if we could make a custom X-Carve config file and use it in Fusion…

Anyhow, progress has been made and it’s nice to be able to create the design and CAM paths in one program.