2 bit carving depth is not even

I am trying to figure out how to use the 2 bit carving option. I have done two test pieces. I am using the .5 inch bit for the roughing and the 1/16 inch fishtail spiral for the detail bit. Both times that I have cut my test piece out it leaves a ring around the letters that is not even with the roughing. It does not look good. How do I fix this? 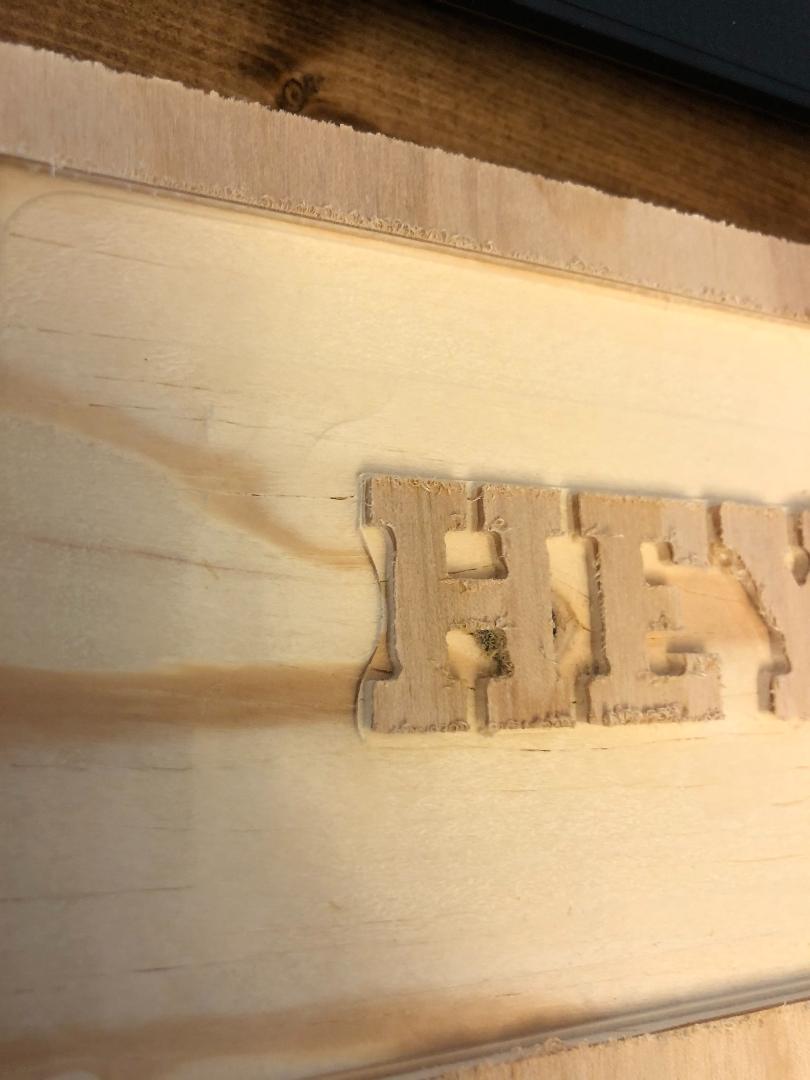 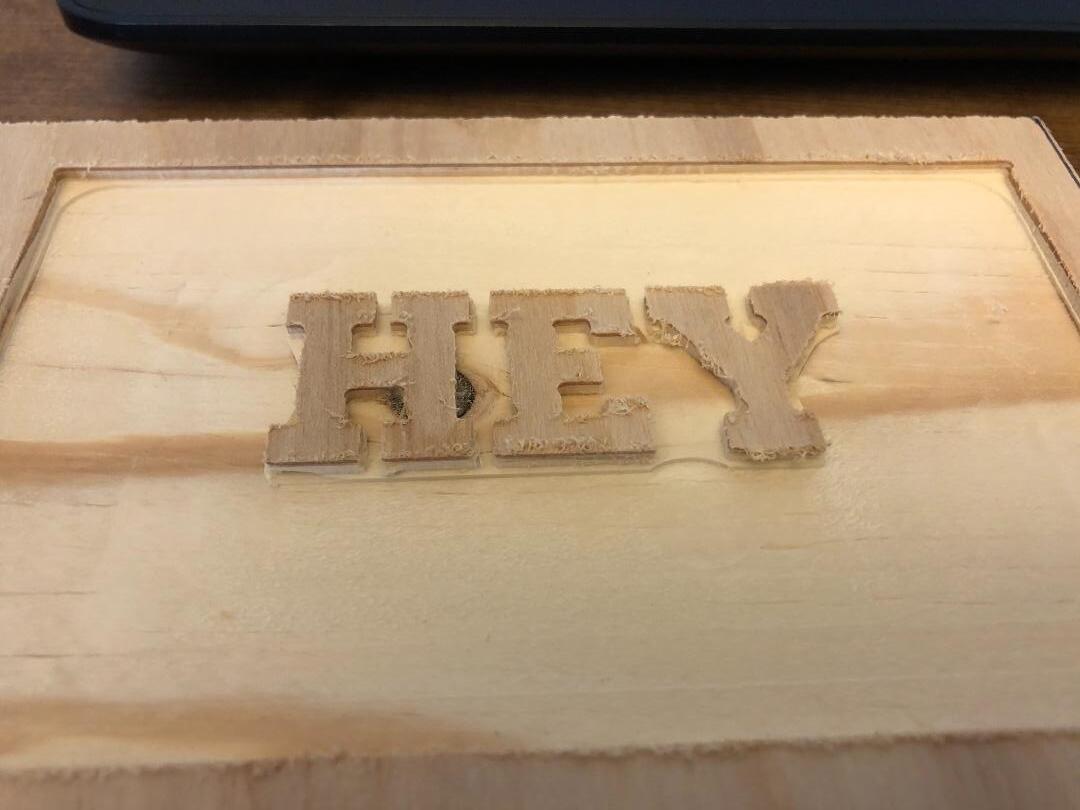 How and where are you setting Z after bit change?

I do not change the router position besides raising the Z to change the bit. Once I change to the new bit, I lower it manually to the wood surface. I currently am unable to use the Z probe because it seems to be inoperable, nor do I fully understand how it works and what it is supposed to do. I also, just recently attempted a two bit carve on a different project with a 1/8 bit for the roughing and 1/16 for the detail. I now have the opposite problem where the detail bit goes deeper than the roughing. 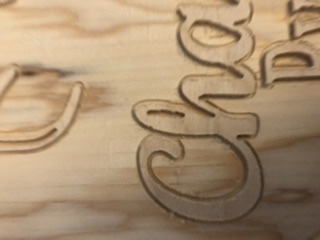 It is pretty hard to get 2 different bits set the same manually.If you have a z probe you should learn how to use it because it will save you a lot of problems.

Ok so you said how.
But where, do you do both at the same location?
Wayne is right, the probe will give very accurate Z settings.
There is also the possibility that the wood is warping between carves. Is the discrepancy present at all locations of the carve, or maybe just in the center?

Thank you Wayne for your response. I will have to look more into how to properly use the Z probe and see about getting a replacement.

Mark. It is throughout the entire project. Not just one specific location. I do both at the same location. I do not move the X or Y at all when changing bits. I only raise the Z to swap out the bit. Once that is complete, I lower the new bit to the wood surface just like I did for the first roughing bit. That’s the only difference.

So are you setting bit Z when directly centered above the corner of the material?
I could see that being problematic.
Setting the Z shoud be done on your material at a location with consistent height and not on an edge.
Example move away and right 1 inch if that area will not be carved by the first bit.
But still use SAME X Y for material zero.

Yes I am setting the bit directly above the corner of the material. I thought that’s how it is supposed to be set up when getting ready to carve. I don’t fully understand how the Z should be any different from the X and Y when setting up. Shouldn’t they all be placed in the same position? Also, when setting up manually, which I do because our Z Probe does not work properly, I have to set up the X, Y and Z all in the same position. The program does not let me set up the X and Y separately from the Z position like a Z probe step would allow. Not really sure what to do if I don’t have a functioning Z probe.

Mark. I was able to actually get the Z probe to work it seems. I ran a test carve with the two bit setting. The roughing pass did what it was supposed to like it usually does. When I went to do the detail pass, I used the Z probe away from the corner of the wood like you suggested. Then went to the XY axis step and clicked to use the last location without adjusting anything and hit carve. It seemed to work. I was worried about using the use last location step. But the depth stayed flush throughout and the detail didn’t go deeper like it before 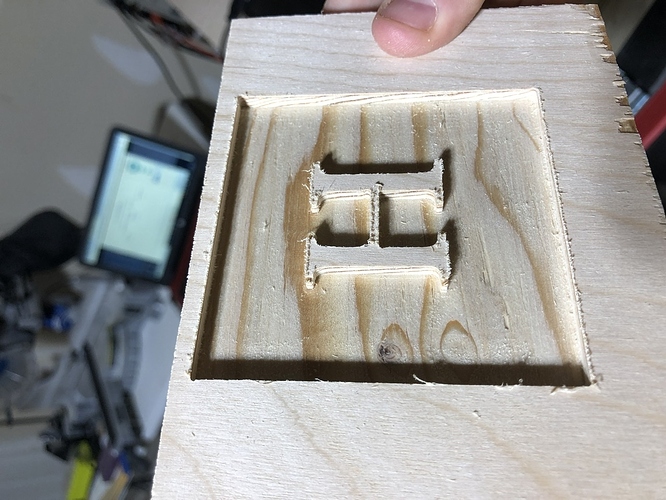 Good it looks like you have it figured out.
Just remember for a two bit carve when you probe Z for the first bit it should be done at a place that will still be there after that first carve.

Awesome. I think I understand that piece a little better now. One more question if you don’t mind. I now notice that the design is not centered on my material, even though in Easel it is. I have even tried clicking the center on material button. It shifts the design up and to the right. Any thoughts?

You did not move your XY up and right did you?
Also the bounding box around text can also not be where expected.

No I didn’t move anything. It all seems to be centered in the middle in Easel. But when it carves, it’s moves it up and right. I even set the XY to the lower left corner of the material before I start. After I do the Z probe, when I set the XY, should I be placing the bit down on the material? Or leave it elevated from when the Z was set. Because if I leave it up, I’m guessing that the XY is set in the lower left corner without actually seeing it touch the material. 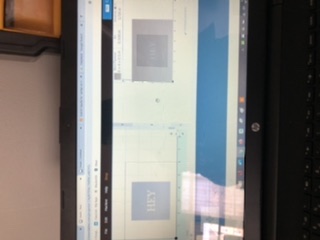 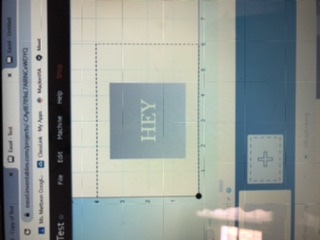 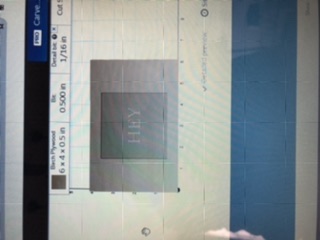 Wayne, did you ever fix the issue of having the carve shift from what is in Easel? I read a post you had a while back and you were having issues with your design being centered in Easel but shifting when to carves and not being centered.

What i found out there was it centers from the box it is highlighted in and your text may not be centered in that box. There are a few work arounds for that.