2 stage carve wants to use v-bit for cut-outs

Hi all, I’m trying to set up my first two stage carve. My plan is to do the rough pass with a 1/4" bit (cutting out shapes, with tabs) and then use a 60d v-bit to do lettering and graphics on top of those cut-out shapes.

However as soon as I add the second bit in Easel, the preview indicates that it’s going to carve the entire thing (including the cut-outs) using the v-bit.

My guess is that means it doesn’t think the 1/4" bit is small enough to do the cutouts. The shapes are made by creating a rectangle, setting the cut depth to full, and and setting “cut outside shape path.” Is there a more correct way to draw the shapes so that Easel is cool using the 1/4" bit to cut them out? Even if I change the roughing bit to 1/32" it still wants to use the v-bit for the cutouts.

What should I be doing differently? Thanks!

Sounds like you’re not adding the second bit, which I think requires easel pro. When you add a detail bit in the upper right hand corner you should see both in the simulation. Sounds like maybe you’re running them separately.

Thanks David. I do have Easel Pro, have set up the second bit, and followed the instructions in that tutorial. You can see my project here: Easel - Fire Spray Holder 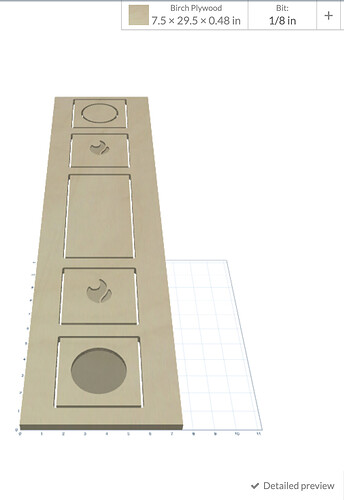 Project is a little wall-mount box to hold a can of fire extinguishing spray.

Looks like you changed the file already, but you want to move the outline cuts to a new workpiece that just uses the bit you want to cut them with.