I am trying to use the 24vDC spindle that was part of my original X-Carve order (Received 06/15) to build a couple props I was commissioned to do for a Holloween costume.

I walked through some basic troubleshooting:

After finding no problems, i started the job again. This time, the spindle maintained speed after the spindle was turned on via Easel. I hope that it was just a glitch on the last job and started the job.
After running the job for about 20 second the spindle started to act up (lose power, stop, go back to full speed), right before shut-downing power to the whole system I started to see arcs (sparks) inside the spindle.

The spindle will now not maintain speed and is not usable.

There was less than 15 hours on the spindle (have not had much time to use my X-Carve other than one or twice a month).

I need to finish the couple props I was commissioned to do by Wednesday of next week.

I am open to any ideas.

Let me know if there is any additional information that may help.

That sounds more or less like a common spindle failure, nothing really outrageous there. Unfortunate, but the 24V is massively prone to that. It’s why they stopped offering it, too many failures. They’ve been really good about trading them in for the DeWalt mounts. Not going to help you THAT fast, but at least is a good solution in the long run.

What kind of props are you working on?

I felt that it was the common spindle failure that had been seen by a bunch of people, but wanted to check to make sure it was not just a PEBKAC error.

For this current project, i am working on two daggers based off a character from the game League of legends. Nothing too crazy.

Most of the props I build are for video game cosplays. I puchased the X-Carve in response to creating the below prop. 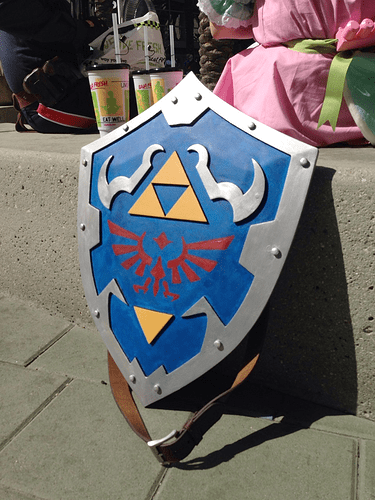 Very cool! Made my sister some stuff for a Soraka cosplay a while back! I actually ended up airbrushing the character’s tattoos on a purple body suit, then airbrushing all remaining exposed skin surfaces outside the suit a matching purple for the cosplay. Was a really fun con.

How large, and what materials? I ask, because you might be able to fairly easily find someone to run out that file for you and ship 'em to you in time, if you can’t get your own unit back into operation before then.

Well until you straighten things out with inventables, you may be able to use a dremel with the mount that you have now. You may need to shim it a bit, but i’m sure you can get it working temporarily till you get a new mount and a router.

Of cause if you have access to a 3d printer you can print a temporary mount out for a router.

I was thinking about having my friend 3D print the mount for the 611. I will see what type of filaments he has, I wonder if the 3D printed version should be stable enough.

The Dremel is a good idea, and I will take a look at that tomorrow.

Otherwise, I was thinking of just falling back to preCNC / preLaser (I wish I still had access to Epilog Laser Etchers) days. I have had to make many things with just a jigg saw and scroll saw.

I’m looking at an Epilog right now! What did you think of them when you had a chance to use them?

How large, and what materials? I ask, because you might be able to fairly easily find someone to run out that file for you and ship 'em to you in time, if you can’t get your own unit back into operation before then.

I am making two sets of the dagger and scabbard in the below picture. They are going to do a pairs cosplay, so both the male and female version of Malzahar. 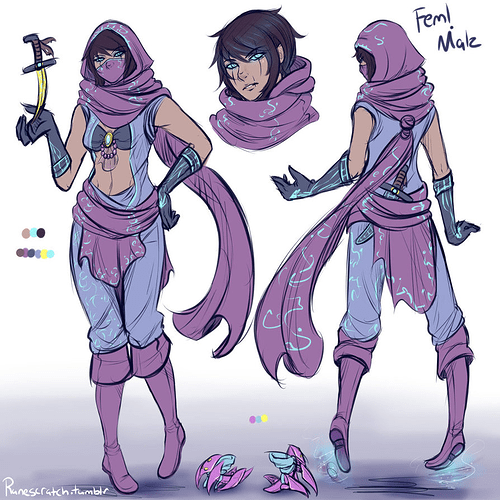 I will keep your idea in mind (good backup Backup plan)

I’m looking at an Epilog right now! What did you think of them when you had a chance to use them?

Good systems, but let me ask first if I may what are you plans for the system? Hobby or commercial?

Part of my job is being part of the team that manage seven 40 Watt Helix 24x18 etchers.

That does look like a darn near ideal use of the X-carve. Plywood - the blade and crossguards, then two more pieces for the sides of the grip? Three pieces for the scabbard (two sides and a welt?)

I’m looking at it as sort of borderline between the two. I’m already doing a fair bit of custom production with my X-Carve, the Epilog would go into that line as another capability. Also, possibly, offering custom engraving and etching on existing objects, and using it to vector-cut suede and velvet linings for the bottom of the pockets in some of the carved cases I make. Among about a thousand other project ideas I’ve had.

I’d love one of the Helix models, but I’m likely going to pick up a Zing-24. I’m selling my motorcycle to be able to afford it.

I have the Epilog mini 18 40 watt. As to your question, it really depends on your needs. They are extremely expensive and require a recharged tube every few years that are, let’s just say you could but a few X-Carves fully loaded for the same price as getting a new tube.

If you’re getting it for engraving it’s great. If you want to cut, it really depends what you need to cut. If I was going to buy it again I would say a 40 watt is a waste for cutting anything more than 1/8in at any reasonable speed, you need at least 100 watts if you’re going to cut wood on a regular basis. It cuts Acrylic up to a 1/4 inch really nice, but again not at a fast rate. Truth is the machine was really made for engraving and cutting of very thin items. The service from the company is excellent, but when buying think of it like buying a car and haggle, I know people have paid huge differences on the same machines.

You can get a lot of info and reviews there.

Ok, that is definitely something to keep in mind… is that relative to use, or just gradual loss of the CO2 lasing medium over time? And are we talking two to three years, five or more, etc?

I’m primarily interested in engraving, and cutting things under 1/8", particularly stuff that is too soft or flexible to use on the X-Carve. Fabrics, leather, extremely thin modeling plywood (1/16th down to 1/64th) with high precision, that kind of thing. I’m pondering the 30-watt unit, and speed isn’t particularly critical to me… Heavier items can be much more easily secured to the X-carve for cutting. It’s mostly the thin stuff and fine markings that I’m lacking in capability for, stuff finer than a 45-degree V-bit will do well.

In your experience, are there better options for this kind of use? I was planning to get quotes and possibly hit up a trade show to see what they had for pricing that way. I’ll definitely check out the site there, I’m always on the hunt for good information!

That does look like a darn near ideal use of the X-carve. Plywood - the blade and crossguards, then two more pieces for the sides of the grip? Three pieces for the scabbard (two sides and a welt?)

Yeah, for that kind of prop you’d need good Baltic or Finnish birch, I’d think. Solid is probably the easier way to go, especially if you can resaw and plane to the thickness you want. Bonus for being able to include a little clearance for the scabbard, so it doesn’t scratch up the sides of the blade. Gets away from having to add spacer tape.

Ok, that is definitely something to keep in mind… is that about use, or just gradual loss of the CO2 lasing medium over time? And are we talking two to three years, five or more, etc.?

Interestingly I have only had one or two bad tubes and one was due to bad optics. We have to replace the X-Axis motor on all of the units at least once a year. I have heard that the X-Axis motor is a common part to fail in high volume (or high daily use) environments.

Some of our etchers have been running four + years with the same tube.

Ok, that makes me somewhat less concerned, anyway. So it is largely a function of laser-on time for the tubes?

Replacing a stepper motor isn’t a particularly big thing, anyway, so I can live with that. Makes sense on the X-axis, given that it gets run like nobody’s business doing raster engraving! Bonus to the Zing there for the steppers instead of servos, replacements are hella cheaper, even if they are slower!

I’m imagining something on the order of probably two to three hours of overall use a day, probably of that, maybe an hour with the tube powered, the rest as setup or layout planning between cuts, etc.

I would say take a look at this forum post, there is not one answer.

My recommendation would be to slowly put money away for the day when the tube will fail, and you get the 3K bill to replace it.

On a side note, if you plan on doing a lot of vector cutting I would recommend getting a vector cutting grid. Having a cutting grid I find is a great help for really light items as the exhaust suction can help hold the lightweight material down. (i am talking super lightweight; like paper)

Depending on how slow you are happy to go Dan have you considered the JTech laser on your X-Carve?

Sure, for plywood you are down at 200mm/min and around 0.2mm cutting per pass but for things like closed cell foam, paper, card, felt etc. most cutting is a single pass. Balsa and bass wood are also fairly quick.

I’ve not tried for marking leather yet, next of my list.

Really depends how slow you are happy with but easy to integrate with standard X-Carve. I even still use Easel for my designs and layouts but send using Chilipeppr as currently you need to modify the gcode to change Z movements to laser on/offs (30 second process to do).