I’ve got my xcarve (1000m) tuned pretty tight, and haven’t had a lot of problems, except when it comes to the 1/4" endmill. I typically generate paths in VCarve Pro and import in Easel (use Easel post processor) and have had very good success with every other bit - vbits, 1/8" endmills, etc. However whenever I seem to use a path with my .25" endmill it mucks up - it plunges much deeper than I’d prefer and goes off path, and will end prematurely. I have no idea what’s going on, as I think that all my settings in VCarve are correct. Any help is appreciated! 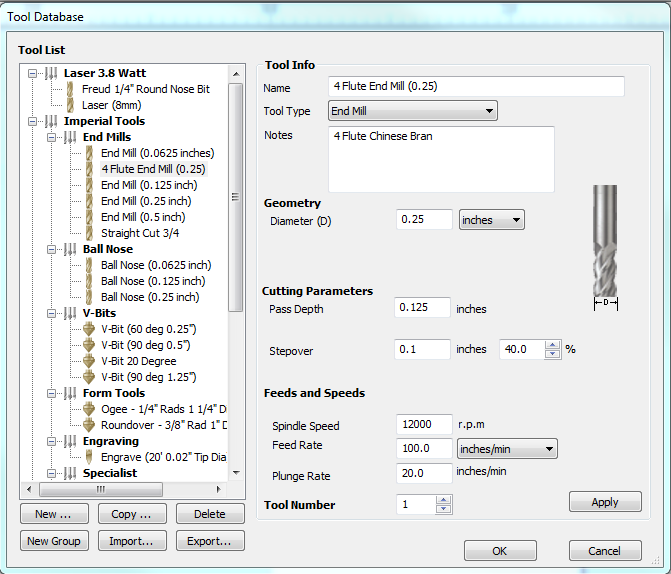 I’d try some less aggressive cuts and see if the problem continues…worth a try.

What does the Vcarve preview show?

Doubling the number of flutes changes all the calculations.

If I understand it you should be doubling the feed or upping the RPM to get the same load on each cutting edge (may be wrong here). But that seems counter intuitive as I don’t think the XC can take the load.

Hmm, try reducing your depth of cut to 1/4 bit diameter and see if that improves things? Or maybe try a 2 flute 1/4" bit with the original settings if you can?

I’ll try these settings later tonight and provide some feedback - I’ve gone slower in the past but the bit gets very hot - still it’d be better to burn through some cheap bits than ruin another carve.

The bit getting hot is the four flutes rubbing. You may want to try to get some 2 flute cutters.

Also, what material are you cutting?

I’ve had success with a 1/4" 2 flute cutter running 100 ipm at 0.125" but in plywood (stock belts and motors for X/Y). For any hardwood, I’d probably do similar settings that Phil lists.

I think I’ve figured out the problem - and most of you were right; my feeds and speeds were too aggressive, and the 4 flute cutter is problematic. I lowered my feed to 50 ipm at .1" and did a test cut (oval shape) in some mdf with the 4 flute .25" bit. As usual the carve ended prematurely before completing one complete oval (see video EDIT: Can’t get video to upload).

I then switched out to the 4 flute for a 2 flute .25" endmill and the carve completed with no problems or errors.

Does anybody know what would cause easel to prematurely stop the carve? Is there some sort of feedback where if the bit gets too hot it triggers an automatic cancellation?

is an entirely different problem. It’s been addressed in many threads. if you have x-controller i would try connecting the usb from computer directly to the board, bypassing the connector on the control panel. you will need a mini usb cable.

Edit: Was typing my reply as Phil posted