A few months ago I posted about breaking the collet on the dewalt 611, not actually the collet but the threaded part that it screws onto. It actually fractured in 2 places vertically. 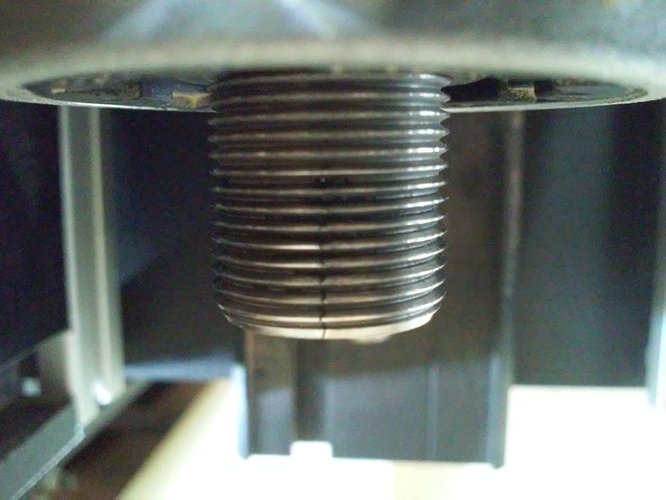 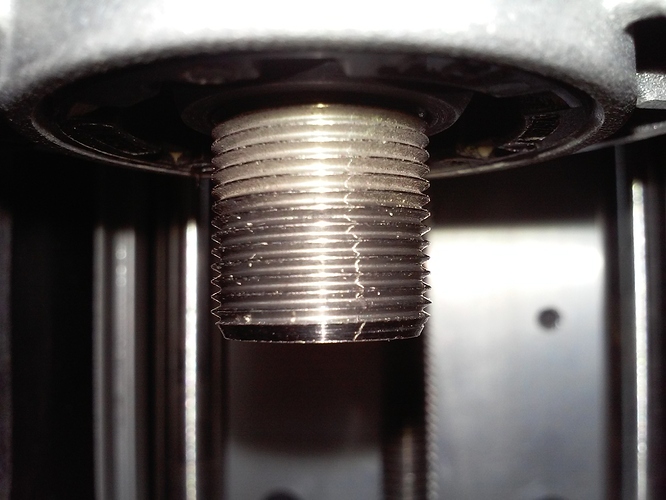 Do you blow out your collet and spindle with every tool change?
I have an air hose within reach and invariably there will be dust in there.
I’m wondering if you have a build up of dust and then when you clamp down on the collet you are creating an imbalance of forces.
Just a thought.

I never blow it out but everything looks clean.

I also change between 1/4 and 1/8 collets.
There is always dust on them and I blow them off thoroughly.
It was just something to consider.

It could also be a bad heat treat job on the spindle.
(but its strange that you got two of them)
Its still under warranty so I would still get DeWalt to replace it.

I’ve talked to Dewalt, Inventables and Elaire customer service and no one has heard of this problem. Thought I might have tightened it too tight but the tech at Elaire said it couldn’t happen without maybe a 2’ wrench!

If you’re confident that everything is clean, then it comes back to a defective spindle.
It will be a problem with either the material specifications or the heat treat process.

What are you using? bits / adaptors etc…
Looks like damage is caused by too much vibration and a loose or tight area that shouldn’t be.
Hard to tell unless we know what was used.
Another idea could be:
The collet nut could be too lose and when you tighten the collet it puts outward pressure on the walls of the shaft and the metal will split when the thing is under load while being used.

I mostly use bits from Whiteside, Drillman1 Destiny bits (On Ebay) and Freud plus standard 1/8" 30degree vbits. I use the standard 1/4" collet from dewalt and the 1/8" collet from Elaire no adapters. I hand tighten and then snug it down with the wrench.

Stay off the steroids.

Just spent about 1/2 hour on the phone with a tech at Precise Bits. As with everyone else he never heard of a spindle splitting let alone 2. His thought was that one of the lobes on my collet may not be ground properly and putting stress on the spindle when tightened. Just might be the problem?!!

Like I said, I can’t be sure. However, having this happen to 2 router from 2 different places makes me heavy lean to there being something with one of the collets (or nuts). From having measured thousands of our collets I can say you get some crazy results with a badly ground collet (none of those make it to sale just to be clear).

A badly ground collet wouldn’t have even contact with the bore of the router. That could not only cause runout and vibration issues but differential stress. Under load all those would add up to additional issues possibly causing the damage seen here.

Or Chris is the most unlucky router buyer ever…

1 Like
Machine randomly drills into waste board and heads towards top right corner
ChrisRice July 6, 2017, 10:28pm #15

Thanks for the advice John! I’m not gonna take a chance, I just ordered the 1/8" and 1/4" Ultra kit. Just so everyone knows Dewalt says they will warranty both without question. Should have the first one back in a few weeks.

Not sure about the lobe not ground as suggested. The only way it can crack is if there is too much force from the inside towards the outside. This means that the outer nut may be loose and the collet too large and when you tighten it and run the system the extra force that is applied and the vibration causes it to crack.

The exact same thing happened to me twice too but it happened when I was tightening it, I felt and heard it crack. I ordered the precision collet kit from Inventables and I can now tighten it as hard as I want without problem. I too think that the original collets were either too big or too small.

Glad you have it corrected.
Now get to work and carve some kick butt stuff! 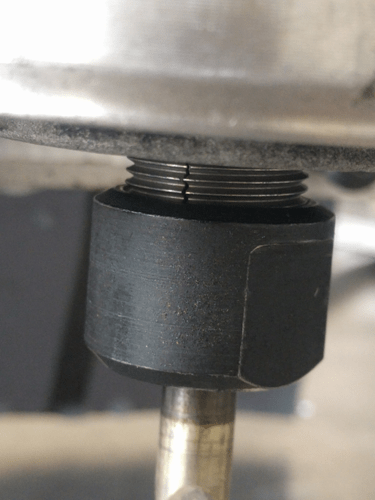 Just happened to me as well. Been cutting aluminum hard for the past few days with a 1/4" 3 flute ZrN endmill and noticed I was getting a ton of runout. spun it around and saw the crack. Time for a different spindle…

I’m about 99% sure it is the collet. If its under 1 year old dewalt will warranty it. I just took my second one in.

I use mine pretty deep. I think in at least my situation I got a bad collet. I’m sending it in to get checked.

I had the tool extended out to the non-fluted portion so that I could indicate runout, that’s why you can see beyond the coating. Otherwise, I keep tool length/stickout as short as possible.

This router is just about 2 years old, tons and tons of hard hours on it(original brushes too!) so I don’t know what that means for warranty. I’m not even sure it’s worth paying for repair since I’ve been looking at vfd water cooled spindles for a while anyway. Might be my excuse to get one lol.