Just getting started with some 3-D carvings. I picked out one Michael Tyler’s mantel clocks. I think it’s about 9x12 in size. Nice piece and not too complicated to put together. I knew it was going to take a while to carve, but wasn’t quite prepared for 12 hours or so of machining. Wow.

So, I’d like to do some additional carvings in the future, but wanted to ask some questions about workflow, bits, feed rates, plunge rates, spindle speeds, etc. I’m carving red oak.

I am currently using an Amana 1/4" two flute bit for the roughing cuts. I found that the plunging is what really takes the toll on the bit, whereas just moving in a straight line is not too difficult. I’ve slowed my plunge rate down to about 25, and that seems to be comfortable. I use some charts from Vortex tools, and came up with a speed of 200 ipm, at about 12,000 RPM. That seemed a bit too fast, so I dropped that down to 180 ipm. I found I’m able to speed that up to almost 200% 360ipm, on some of the final passes, but the flip-side is I need to drop it down to about 60% to 70 or so ipm with a really deep plunge cuts. This pretty much means babysitting the machine and adjusting on the fly. There does not seem to be any way when adjusting a tool paths to be quite so selective. I’m currently using Vectric Aspire.

While the rough-cut is fairly fast compared to the finishing cuts, it still about an hour and a half. Once I switch over to the ball nose for the finishing cuts, oh boy do things ever slow down. I’ve been running a tapered ballnose (1/8", 5.4 degree specta coated) at about 180 ipm. It has a suggested plunge rate of around 45, but again to me this seems to kill bits. I’ve slowed that down to 25. Mostly I’m just going by sound. The suggested overlap is around 8 to 10%. I have no idea if these numbers are in line with what other people are using, so I’m seeking guidance. I’d love to be able to speed the process up some. Michael Tyler recommends a 1/16" bit, and no question the results are superior to the 1/8", but it adds an extra three or four hours to the already long time. How are people dealing with these long times? I’m afraid to leave the machine unattended.

Today in an hour and a half one of the bolts on my spindle came loose! Fortunately the bottom one was still tight so no damage was done, but the results could have easily been disastrous. I’m amazed how the vibration of the machine loosens up bolts. I’m starting to go around and use Loctite where I can, but can’t do that on the spindle, as I adjust it frequently.

The other thing I had never even considered was the heat generated by the vacuum cleaner. I’m using a Fein, which has incredible suction, but over the course of several hours in a small room it can raise the heat levels considerably. I’m not so sure that running a vacuum cleaner that long is good for it either. I think that machine is something like 12 A, so definitely sucks up the energy. Has anyone had much luck with a smaller vac? I can say for my roughing cuts I really need the extra suction, but for the finishing cuts it’s mostly dust, and not chips, and I would think a smaller vacuum would work. Again, not something I ever considered, but it’s now an issue.

So, looking for some feedback as to bits to use, feed rates, plunge rates, rpm’s etc. and general suggestions on workflow to speed up the process. BTW, I’m using my tapered ball nose bits at 18,000. Tools today has some pdf’s you can download for the various bits and that’s kind of what I’ve been going by as a starting point. I can say that the suggested speed rate was something like 45 ipm on the ball nose, and that’s crazy to me. I can easily run that at about 180 ipm with no problem. I’m guessing it could even go faster but it’s a $65 bit, and don’t want to snap it.

Many thanks for helping out a newbie!

A couple of questions.
Are you using an X Carve in original configuration? If so and at default settings 19 ipm is max rate for plunge.
What depth per pass are you doing g at 360 ipm?
Also what software, Vectric?
The plunge rate is what slows down the 3d finish process.
I adjusted my max rates up about 50% above default and all has been well. 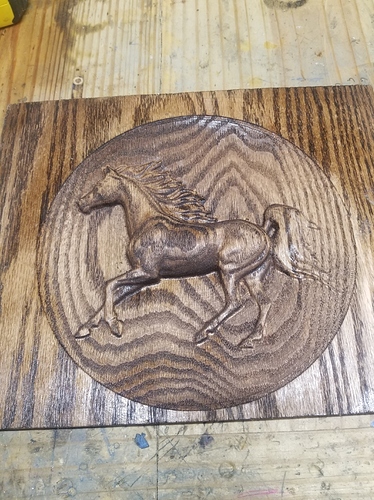 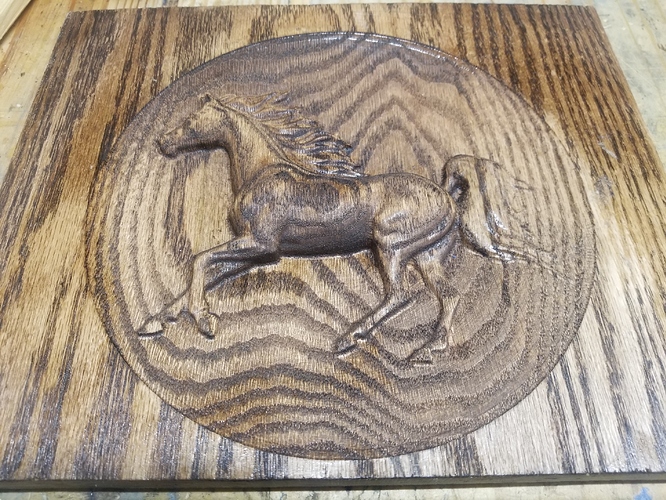 Actually I’m not using an X-carve at all. I have a self built OX Metal machine that uses heavier parts overall, along with Acme lead screws. I don’t think the machine is the weak link here. I say that as simply changing bits with the same feed rates and plunge rates can make a big difference.

For example, I started out with a CMT down cut end mill. With the sounds coming out of the machine I thought it was going to fly apart. I switched over to an Amana, two flute bit, and it cuts like butter. As mentioned in my original post, the biggest problem areas seem to be with plunging in general, and not with feed rates. If I was encountering any problems with feed rates, it was on the conventional cuts, and chip out, and not with bogging the machine down. Of course I really don’t want to be running climb cuts too fast either, at least with a quarter-inch end mill.

The ball nose bits seem to be less problematic in that regard. And let me just say here as well that it may sound like I’m speaking with some authority, I am not when it comes to the CNC. I am mostly just going by using power tools for the last 40 years, and the sound the tool makes. Whether or not I’m actually doing any damage or pushing the bits beyond their capability I don’t know. I have no sense of “normal” for the CNC. It does seem like if I plunge too fast I will burn the bit up, and at $60 a pop that gets expensive.

My maximum depth was a quarter of an inch with the end mill, (rough cut/clearing) and just a little over a 16th of an inch with the ball nose. Problem is parts of the cuts with the ball nose are deeper in spots. This is where I was manually adjusting the speed. I use intelliG-code as a sender. Easel seem like a toy program, so I’ve never even tried it. I think the default plunge rate on the ball nose is 37.5. That’s a figure that comes from the manufacture. These are spectra tapered ball nose bits from Tools today. Probably one of the most expensive bits you can buy, but they do perform admirably. Of course, I don’t want to press my luck and snap one either! That’s why I’m asking for advise.

At 360 IPM, I am barely taking a 16th of an inch. I use Vectric Asprie for the tool paths and design work. Here’s a sample pic of what I’m carving, and you can see the deeper areas. I had some bad areas in this piece, and I was also using some double-sided tape which came loose without me noticing, and I had different depths of cuts, so decided just to start over. I think I had about five hours into this one. I threw a little bit of Watco oil on this just to get a feel for how was going to look. I’m excited about completing the project!

May I asked what kind of step over you’re using, as well as feed and plunge rate? I’m milling red oak and the depth is about 1/16 of an inch. On the half columns in this little carving, the bit plunges much deeper. This is where I can manually slow the feed down, but not sure I can slow down the plunge rate. If you think I can safely go up to about 37 ipm on the plunge rate I’ll give it a try, but I certainly don’t want to burn up the bit either.

The only way I’m going to do a 10 hour machine time is over several days, which means leaving the machine powered on and the laptop connected and powered on. I found the vacuum cleaner gets really really hot after several hours as well. No question a commercial dust collector is a better way to go. I have one, but just not near the CNC. I thought the Fein would handle the job, but it does throw out a bunch of heat. I have a little 2 hp shop vac I’m going to try as well. I think during the carving I could probably leave it off for a while too. It’s mostly dust, not chips, so not a lot of build up. In the above example, this was done with an 1/8th inch end mill. It’s a little bit rough in spots for sure. I certainly don’t see myself doing any large carvings anytime soon. These times are crazy!