Well shoot. Thought this was going to work, but three strikes and I might be out. I have a strong spindle (.8kW), have stiffened the x-axis, and carefully adjusted all the v-wheels and belts, and stepper driver currents. Just can’t get it to finish this job in aluminum. I’ve done many similar jobs in other fairly hard materials.

And here’s how far I got. 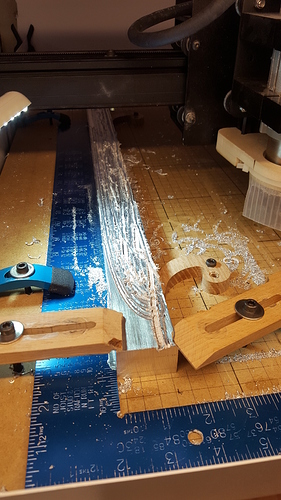 I’m using GWizzard for speeds and feeds, and running at about 1/2 that feedrate to start. Started with a 3/16" bit but was seeing too much rail deflection. Switched to 1/8" bit. It seemed to be working, but eventually lost steps and diverged, twice.

After the job fails, the bit tip seems to be encased in an envelope of chips. Takes quite a bit of force to pry the chips off the bit. That might be a clue. 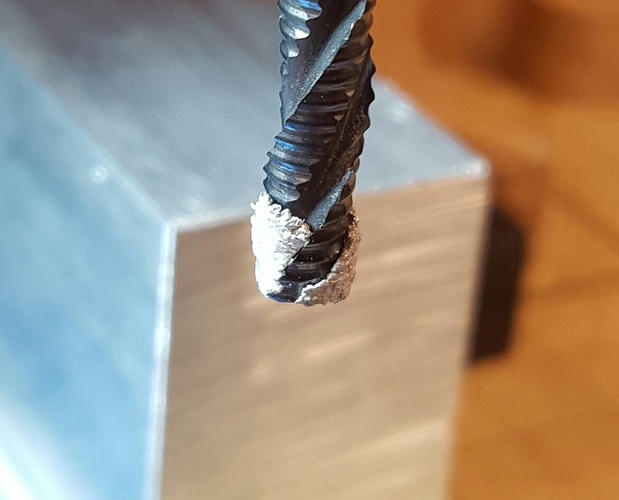 Any ideas? Is this kind of job possible on XCarve?

It looks like you are not using any coolant and at the slow speeds the aluminum is melting and sticking to your bit.

If I go faster feedrate, there is too much deflection in the XCarve rails… I think. Also, seems like coolant would ruin the waste-board. I guess I could blow air on the bit.

You can decrease the DOC and increase feedrate, that may help some, But you really need some way to lubricate/cool the work, even if it means just spraying WD40 on the surface while it cuts.

Can you share a screenshot of your GWizard feeds and speeds screen? What type of bit is that you’re using?

Are you using a bit specifically for Aluminum? I’ve had decent luck with standard 2-flute up-spiral Carbide bits, but others have said that coated bits helps significantly.

Also, for milling Aluminum step 1 is to make sure your work surface is flat and true. The easiest way to do this is to tape or screw down a piece of MDF that your part will fit on, and mill it flat with the biggest square bit you have. Some people just mill their whole wasteboard but that could take a VERY long time. Most of my projects have been small so I took a chunk of resin countertop and made a buck out of it that’s completely flat with countersunk holes that match up to the threaded inserts in the stock wasteboard.

The reason this is so important is because with most metal cutting your DOC is only like .1mm or so. If your work surface is not VERY flat you can easily bog the bit down and cause deflection or breakage.

Then, stick your material to the flat-milled buck you made however you choose, and cover EVERYTHING except the material with tape. I like blue painter’s tape. Work from the material to the outer edges making sure to overlap the tape a bit and also cover the edges of the wasteboard and a little underneath. This will keep the lubricant from getting into the wasteboard and it can also help with cleanup after the fact.

I’ve had decent luck with WD40 as a lubricant, but some folk on here will also say that with a good chip clearance strategy lubricant isn’t necessary and can be dangerous because it may cause the chips to clump and clog the cutting area. YMMV, but if you’re not going to use lube make sure you keep the vacuum handy.

Run (a) was milling the holes only, I stopped it when x-rail deflections became excessive. Runs (b) and © both started well, but eventually lost steps. In run (d), the bit broke five minutes in. It may have caught an edge generated one of the earlier runs.

A GWizzard screen shot from run ©. 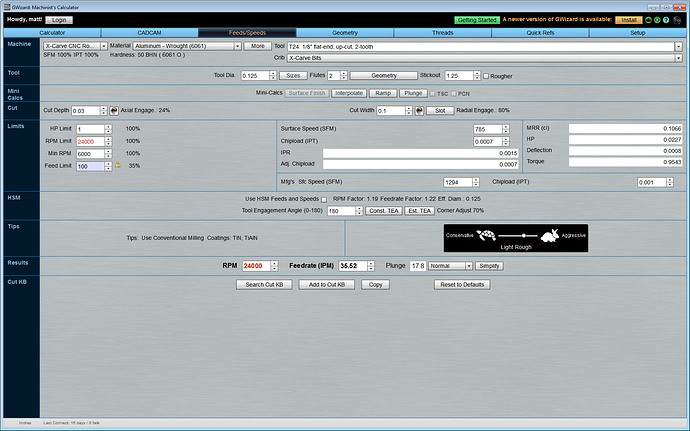 Making a flat buck sounds like good advice. I know my table is out .5mm in Z from one end of the 28" stock piece to the other. I always slow feedrate to 1/2 for the first tool-path level, but sounds like this may be hurting me with aluminum.

My goal is to get this working with no lube. I will look for an aluminum specific bit.

What diameter bit do you like for cutting aluminum on XCarve? What width, depth, and speed do you typically run?

I have stuck with the defaults from Easel and had good luck.
127mm/min and .1mm DOC.
I generally stick with solid carbide 2-flute upcut spiral bits.
I’ve used 1/8", 1/16", and 1/32" bits and all have worked pretty well as long as everything is flat.

If you’re .5mm out front-to-back you’re gonna bog the bit down about a quarter of the way back as it travels. It’s no wonder you’re having deflection issues. I’ve seen videos of people who say with Aluminum you should go fast and deep which is kind of counter intuitive and I haven’t had the minerals to try it yet.

If you’re dead-set against liquid lube, you could get some dry lube. It sprays on like wd40 but flashes off almost instantly into a powdered teflon coating.
http://www.lowes.com/pd_236635-56167-16-TDL___?Ntt=dry+lube+ptfe&UserSearch=dry+lube+ptfe&productId=1066849

I did feed/speed testing with my 611 before cutting some aluminum plates, here’s the settings I used. Maybe you can feed them into GWizard to get some baseline deflection information, and then start putting in your bit/speed info and tweaking it to get something similar?

If I was cutting something like that and would be continually running the bit in a pocket, I would make the pocket a bit wider than the bit. It’ll require more passes, but it’ll help eject the chips better.

Okay. Thanks. I’ve been running closer to 1mm DOC. Sounds like that’s just way too deep.

I am using motor oil and having no issues with metal sticking to the bit. 20-30 ipm @ .005 doc. I have tried just about everything even cnc coolant from work and motor oil seemed to work best. 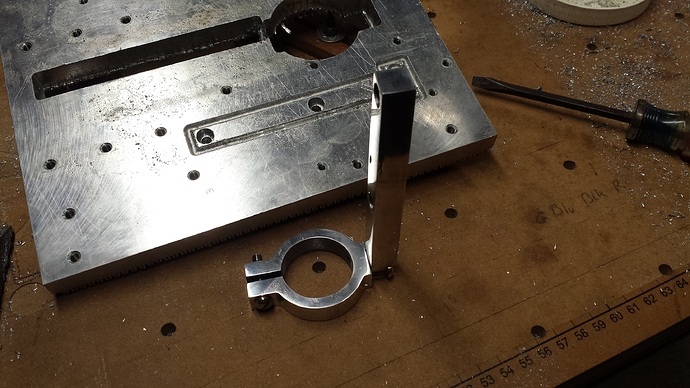 really you where able to go 800mm/min that seems super fast?

It said it was 800 mm/min, but the plates still took forever to cut out because of the shallow DOC. Now I’m curious what it truly was, maybe I’ll go measure it tonight.

The plates were the stiffeners for the Y axis, so that was only done with the X axis modified. I might be able to do slightly deeper cuts now that the plates are in place, but I’m still working on my next aluminum project design.

The SFM value you’re using is quite high. It’s likely the default GWizard uses, which averages a bunch of endmill data (more expensive endmills). I put in a SFM value of 500 and have had good success with that, but it depends on the data the endmill manufacturer lists for the value you put in. Additionally, the endmills we use on the XCarve will experience more deflection that what GWizard shows because of a lack of rigidity in the machine (even with stiffening mods). When i set my “cut width” and “cut depth”, I click the little icon to the right of “cut depth” and choose “finish” for step 2, and “optimize feedrate” for step 3. This should give you a more conservative milling operation and will likely help some with the issues you’re seeing.

The only reason chips weld onto an endmill is because of poor chip clearing, or too deep of a DOC. With a constant air blast on the cutting area to clear the chips, you will get a much nicer finish, too. Coolant (WD-40, etc) is not always necessary, but when you have a constant air blast it gets much easier to spray a drop or 2 in the tool’s path just to get things coated. There are a few threads around here that discuss cutting aluminum such as; Production level aluminum milling with .8KW water cooled VFD

Also, it looks like that end mill is TiAlN or AlTiN coated. Stay away from this coating at all costs. The “Al” in those coatings is aluminum, and aluminum likes to stick to aluminum in high heat, so you are much more likely to clog the cutter up. When you are comfortable with your speeds/feeds, check out ZrN coated endmills (with a high helix) or Destiny Viper “Stealth” EMs. They cut aluminum like butter, are quieter, and leave a significantly better finish.

Works like a charm! I tryied with and without oil(3in1 works very well) and the result is pretty much the same.

The latest try is working, although slowly. I agree that staying under DOC .25mm and 16000rpm (for 1/8" bit) is about right, to avoid chip welding. I’m running at 635mm/m now, will try increasing the feedrate in the next job.

At that feedrate you’re rubbing a lot, you need to move a lot faster.

Hi Cristian - How do you know if you are rubbing? The bit doesn’t seem to be getting hot. Not hot enough to weld chips anyway.