I got my 3D printer the same week I got the X carve setup and running. Made three parts for the X carve so far with the printer. Tonight I did my first full test carve and there wasn’t a speck of dust to be seen with the airflow divertor and dust shoe. The handle for the X axis is my own design but the other parts were borrowed from the forums here. I did raise the temperature of the room by about 5 degrees with the shop vacuum running non stop for over an hour but winters coming here in Canada so for now I’ll call that a bonus feature : ) 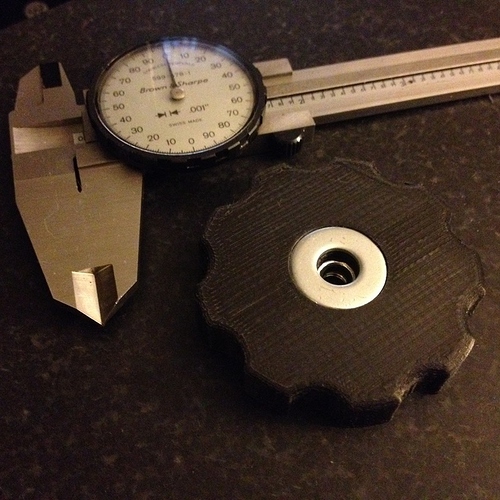 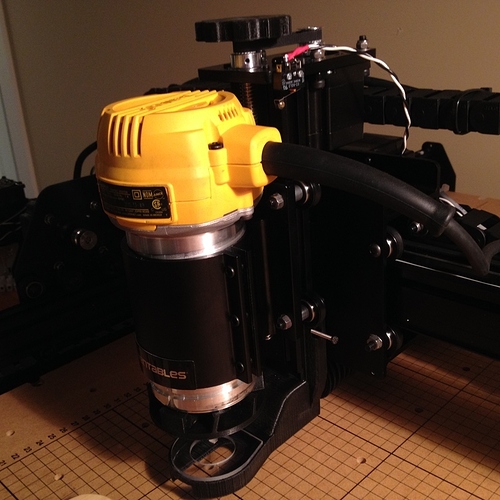 In case anyone is wondering the bottom photo was taken after carving some lettering in sheet of bamboo for an hour, no dust to be found anywhere. The low profile, fixed dust shoe did an amazing job.

So, question! How large were you able to get that hand-nut for the Z before it started interfering with your router at the top of the Z-travel? Also, what’d you use for the center? Looks like a nylock, followed with a washer on top, or something? I’ve been considering exactly that addition, myself!

The handle is 55mm in diameter but to be honest I never did check to see if it would interfere with the spindle at the top of the range of travel. I will have a look tomorrow and let you know.

The handle does overhang the router by quite a bit, causes me to lose about 3/4" in Z height. I don’t have plans to cut anything thicker than 1/2 plastics so for the time being Im not worried about that. I built an extension that hits the rocker switch before the router bumps into the handle.

I also printed a new box for the arduino and GShield, drove me nuts that I couldn’t get the GShield to fit into the Arduino when it was screwed down. The box is just physically to small to allow it, curious to know how that one got past QC? From what I can tell there are a lot of people having the same issue. 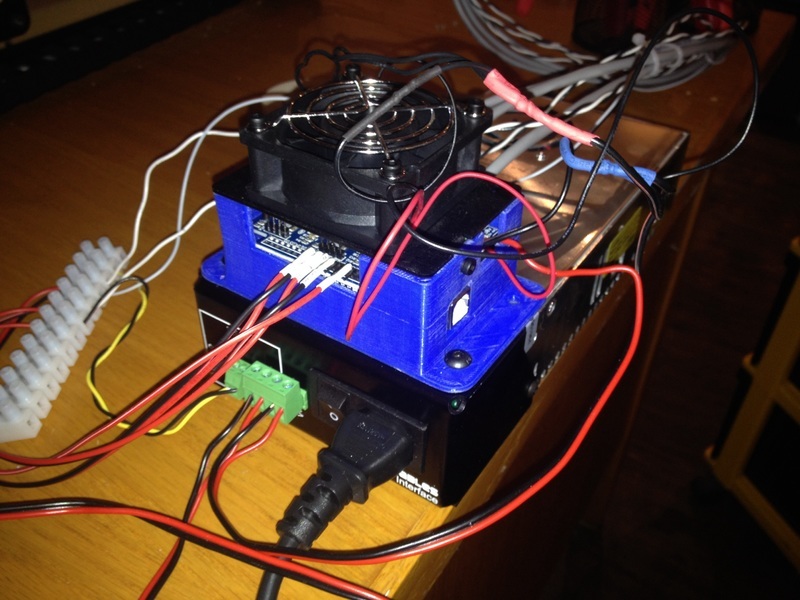 That’s a good looking enclosure, I had to take after mine with a dremel tool a bit, just widened the “window” to make more room for the header and all worked well. As an added suggestion, could you add enough room to that to provide a plug for a touch-plate? Seems like that could be handy as well.

I got the Stl file for the box from Thingaverse so can’t alter the file but I am going to be adding a touch plate so I’ll ask the fellow if he might give me the model file and make the room myself. Cheers, thanks for the suggestion, can I offer you a free enclosure in your choice of red, black or blue

That enclosure is my design on Thingiverse based on the design from Inventables. What modifications are you looking for? I can make the changes and post the files. I designed the case in Cubify Design.

Hi Curtis, thanks for the file, the enclosure works perfectly. I haven’t added a touch plate yet but we were talking what amounts to a hole in the enclosure to add a simple plug to connect the touch plate but allow it to be easily removed. After using my 3D printer I’m comfortable simply cutting a small hole to add my plug, the plastic is more than strong enough for that and makes it easy to use whatever plug you might have on hand.

Thanks again for the file.