I do not have this printer nor have I used this one but I found it on Ebay and thought I would share.
For this price of entry, it is crazy not to have one now!
Free shipping from USA 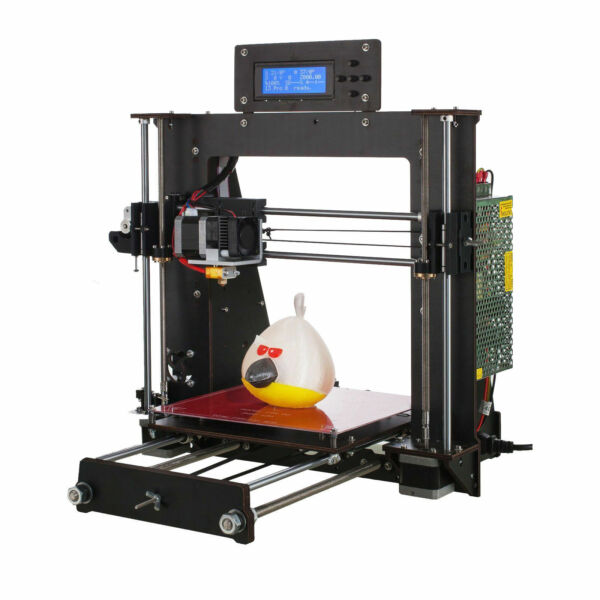 Find many great new & used options and get the best deals for CTC 2018 3d Printer Prusa I3 RepRap & LCD Controller Mk8 Extruder Mk3 Heatbed at the best online prices at eBay! Free shipping for many products!

I’ve had a Makergear M2 printer for a few years that with mods cost me $2000ish and works really well. Last Summer I heard about the Monoprice Mini Delta printer that was coming out for $160 and I finally got it a couple of months ago. I really just bought it because I couldn’t believe that printers were now that cheap, and besides delta style printers are very cool to watch. The print quality is surprisingly good on it, though the dimensional accuracy of the prints isn’t quite as good yet (I’m tweaking it). Overall it requires a bit too much knowledge/tweaking to be considered a good first printer for anyone, but as a second printer it’s fun to have around.

Both. I replaced the bed with PEI, there are clips that stabilize the bed more, rewired the motors so the print isn’t rotated were physical mods. Still need to adjust tension on the motor belts. Will probably have to upgrade the extruder drive and Bowden tube connectors eventually. On the software side I’ve adjusted the bed leveling and startup gcode to avoid plastic leaking on the bed while preheating.

But a delta is usually faster than a Cartesian printer and the accuracy can be just as good. I agree with you that the math is mind boggling.

When explaining a delta I tell people to imagine three pulleys arranged in a triangle on the ceiling, then imagine a bucket filled with sand with a hole in it with three ropes tied to the handle which go through the pulleys. Now imagine three people drawing a square on the floor by pulling/releasing their rope in coordination with the others while keeping the bucket a fixed distance from the floor.

Am I mistaken that these cheaper machines have a lot of issues?
I’m used to running stuff with Nema 23’s, G540, and what not for CNC–are there any 3d printers with more robust, and refined–yet hackable hardware?

StevePrior’s experience is somewhat like mine with a 6040 from China. I had to rewire everything, throw out the old wires, and hit things around to get it working. Worth it to some but to other’s it’s a pain to say the least.

The machines were certainly made to hit a price point, there are certainly things about this printer that are probably going to break at some point and I’ll replace them (like the bowden tube connector I mentioned). But to be fair I pulled the machine out of the box, stuck the included SD card in the slot, preheated the machine, loaded some filament I had, selected the sample file from the SD car, hit GO, and ended up with quite a decent sample print. For some reason the makers of the machine wired the towers so that instead of the model facing straight forward it was printed looking to the left - not a defect in my machine, they’re all like that. And since the bed is circular it really doesn’t make any difference, but bugged my OCD and someone had posted instructions on how to easily change it - no big deal, warranties don’t usually last very long around me anyway.

Oddly enough some reviews of the machine complain that it didn’t come with a custom machine slicing program to prepare files for printing. My reaction is that is a good thing because I was able to use the paid Simplify3D program I already use with my other printer, free options include Cura. The real complaint is that the need to set up the software makes it harder to figure out if it’s your first experience with 3D printing, a little bit of a shame given how easy the hardware is to set up.

Replacing the stock bed with PEI is a no brainer if you’ve use PEI on other printers - it’s cosmetically less attractive (clear yellow instead of black with the companies logo on it), but it works MUCH better and doesn’t get damaged. BTW I used my X-Carve to cut the PEI and it worked great.

I certainly think that 3D printing enthusiasts found out this machine had surprisingly good print quality out of the box and decent hacking potential and it was so cheap that they bought it as a toy printer to sit next to their more serious ones - that’s certainly why I got it.

This is still a different experience than I got with the Chinese K40 laser engraver I bought for $300 - I bought that knowing that the included software (the only one supported by the included controller) was sketchy at best. I knew before the purchase that I was going to play with it just long enough to prove all the hardware actually worked before ripping it apart to replace the controller and do other upgrades. The printer could be used as is by a lot of people.

If the X-Carve was an OCD trigger for you, then you REALLY shouldn’t look under the covers of the cheap 3D printers…

There are few differences in the cheap Prusa clones. I have one I paid $300 for a few years ago when they were still $500. Still going strong. This one is not much different.

I spent like $800 on a 6040 and it worked OK with another $1200 in good parts.
But still you get awful stuff like the retention for the Y screw–I should redo it but you can’t push much with a 1KW spindle. I’d say it was a good deal to get a very ridged and fast machine–but fixing it or otherwise making it better was a chore I’ve not finished in even two years.

My wife tells me the factories do not care–she’s been a purchasing agent for firms and deals with mainland China. I think it’s a miracle what we buy is this good already, and they are thinking (?) longer term by making better machines.

@StevePrior I also had not one but two K40 lasers. My wife got a little tired of me saying that I had to tweak the machine before using so I purchased a decent but still Chinese laser. My 3D printer and Shapoko2/X-Carve is the same starting point to see if I really wanted to spend more. So far, I have only paid more for my laser and love what my 3D printer and X-carve can do for me.

@SomeRandomGuy, You do not always have to spend big or go home. I am glad that I now have money to spend on other hobbies other than worry about how much was spent on something I do not use or how much money I lost on depreciation.

I bought the K40 for $300 including shipping knowing that it was a “kit” for me. I replaced the controller with a Smoothieboard and started using Laserweb with it, but I haven’t spent much time with it lately - been distracted by other toys. The next task would be to rig up better fume venting to outside than the hokey setup I’ve got now. But the holy grail for me is to be able to design a multi-component item in Fusion 360 and have Fusion be able to output gcode for 3D printing, CNC, and laser and have the components from the different machines all fit together. With a little more time fiddling with the laser I think I’d achieve that goal. More recently though I’ve been working on the 3D printed stiffening brackets for the X-Carve so I could do the CNC part more accurately. Now I can do peck drilling with a 1/4" bit in 3/4" plywood and have the hole come out very close to round instead of the previous oval. I’ve also modified the Makergear M2 3D printer to have touch probe bed leveling so that’s been more reliable than ever.

I’m hearing a lot of good things about a CR10 for about $350. Heated bed and cooling fan for the layers. Anybody have any working knowledge of this 3D printer

I make my living from a single CNC router ($200k+ sales) and do some mold making/casting as well. It’s been five years of that and college–all my profit typically vanishes to living cost or whatever else. (Graduate. Diversify. Etc)

But what I usually do is find something that works (6040 or whatever else ) hack it, get a prototype, and with luck it works… Invest and then eventually it’s less half baked. Then customers start calling and hopefully it grows.

For now though I’m enjoying the sites here and it’s interesting seeing everything evolve so fast.

I got an email for Fry’s near me. They had some Maker stuff on sale. Got an XYZPrinting Da Vinci 1.0 for $250. has a 7.8" cube printing area. Never even looked twice at 3D printing, never really cared. For some reason, I said screw it and got it. Still in the box in the office haha. Not sure what to do with it yet either. This version came with a 3D scanner already built in, too. So at least there’s that.

HAHA no kidding. there’s 2 in Houston. I just need to figure out the whole filament part. It takes a cartridge, but i’m told the version I got is refillable with whatever I want as long as it’s the right diameter

Is it possible to replace a damaged PEI without removing the heat bed?
Someone suggested this could be done using the following 3M Adhesive Remover:

Has anyone done this? Does anyone have advice on how to do this?
Thank you.

They certainly are getting cheaper. As someone who has been into 3d printing for the better part of a decade now, some of the 3d printers available really are bargains. The Creality CR-10, and CR-10s are probably the most capable 3d printers I’ve ever encountered, and they can be had for around $300, which is absolutely incredible. They have tremendous accuracy and can print objects that are colossal. I would say they are the best bang for the buck available right now. It’s a very exciting time to be into 3d printing. If you’ve always been interested in it but never gave it a shot, now is a great time. It is singlehandedly the most useful tool I own, bar none.

I bought my second 3D printer a week ago, got it delivered the other day. Looks good. I decided on an open structure (Prusa style) just for the hell of it. I got the kind you put together, like the X-Carve. To be honest, i wanted a project.It’s too hot outside right now in Houston and LEGOs only do so much for a grown a** man. This at least has a function once together…

Plus, only cost me $115+free shipping