3D profiles (Curves on the Z axis) in Easel?

Hi @Zach_Kaplan @paulkaplan and others, As the new year started I was ready to receive “3D profiles (Curves on the Z axis) in Easel” feature in Easel. It was mentioned earlier (“New guy, Questions, questions, questions”) in May 2016 by Zach Kaplan. But where is it now, or when is due to be scheduled? I really need it. I tried the alternatives (GRZ, Fusion, Kiri Moto etc), but they require some CNC understanding and are far less intuitive. My purpose is to make prototypes, not to become a CNC pro, so the software is only a simple means to create the models, not a goal as such.

Wow, I must have missed that post! This would be an awesome addition to Easel. Is there any beta testing for this feature yet? @ZachKaplan

I must have missed this as well…

Someone punch me so I don’t miss it next time…

In the event there is going to be beta testing for this I would LOVE to jump in head first.

Is @Zach_Kaplan still active on the forum: he did not react at all on this topic…?

wow i need this too. i’m slowly getting my head wrapped around fusion but i’d like to be able to knock out what i can on easel so the more features the merrier.

this is also a pretty tricky feature for them to have completely polished and debugged i’d imagine. But even if they just gave us what was in the .gif up there to try out as an app or add-on in easel would be a good first step

@Angelos this feature is still in development. Here’s a peek behind the curtain. As you can see from the animation above the rendering on the right side needs to be “crisper” in order for the feature to be usable. Quick update below on what the future holds: 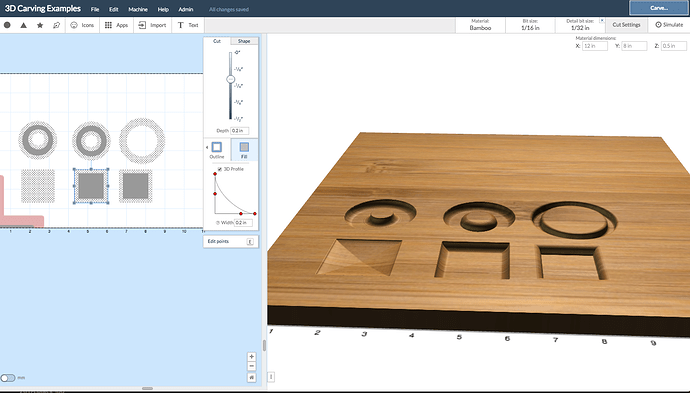 You’d need a ball end mill. I’m not sure about the parallel passes vs. other toolpath techniques. I think they are experimenting to find what gives the best finish in the shortest carve time.

You can see a post on some of the features that launched last week here.

This is just great. When are you going to launch the first public (beta) version?

Hi @Angelos we don’t have a date we can release yet. We don’t know how long it will take to make it work at a level we’d be proud to release into beta. It’s an ongoing effort.

Thank you Inventables team for all the great additions to Easel, wow has it really improved ! Is there any update on this particular feature?

would love to be part of this beta test group when you are ready to test. I have played with curves on the z axis using illustrator and importing svg’s into easel. It works but does take some time and trial and error to get the correct depth you are looking to cut

I’d use this feature a TON! Thanks Inventables team for all the work.

Those features look awesome @Zach_Kaplan. Your team always impresses. Any forward movement with vbit carves? Again thanks for the progress y’all are making, I’ve put off learning fusion because of what y’all have and are doing fits my needs

I would love updates on this as well

No public updates yet other than we’re working on it.

Is this still in development?

Hi @EllenBjerkaas there’s no public update at this point.

Count me in for beta testing as well.