I did the stiffening mod a while back and even though its extremely stiff, which would be better?

My current mod is the steel insert between the makerslide. Would a 40x40 with the added v rails be stiffer?

I doubt by much, if at all. The steel spine mod done properly is going to be extremely rigid proportionately. Might actually be slightly MORE than the 40x40, albeit at a stress level that is probably inconsequential for the X-Carve.

I did the steel bar mod as well. And while it is a lot stiffer there still is a little flex.
I was looking at it really carefully this weekend. Trying to see if the flex was in the Z axis or the X gantry wheels, or whatever. And from what I can see it is in the X rail itself that is flexing, still twisting just a bit under load.
I thought it was an issue in the Z axis because I can’t really twist the x rail by hand directly, only when pulling or pushing on the z axis. But it looks like the Z axis is not actual flexing just acting like a long lever.

I don’t know if a 40x40 will be any stiffer in this application.

It looks like the OX uses as 20x60, with a second 20x40 cross brace (maybe to help keep things parallel?)
And the R7 uses a C-Beam, effectively a 40x80
But those would require a new gantry, and y plates, and …

Every time I try to come up with a better mod / upgrade idea it rapidly becomes a complete re-design / rebuild.

Anyone else got some ideas?

That’s the exact same problem I keep running into, Aaron! I suspect the ultimate end result will be me building my own frame entirely, putting the original controller back on the X-Carve frame and selling it, then using the X-Controller to drive my entirely new design.

Epoxy is not a bad idea. It already has a lot of discussion in another thread from almost a year ago. Not sure if anyone has actually tried it yet.

Yeah I am contemplating just going with a new kit later and either selling my XC or repurposing it to a dedicated laser cutter. The laser diode being a much lighter load and no lateral forces in the gantry so no twist.

I don’t know if epoxy is going to be better than steel and preventing flex. As it seems not to be an issues that the 2 beams are not stuck together well enough, but that a 40x40 aluminum beam is just going to flex a little at a 1000mm span. (the Ox which uses a 20x60(?) limits the span to 750mm due to flex issues).
Maybe if you FILLED the inside of the beam with an epoxy? Making the aluminum less flexible.
Or mounted steel rods down inside the beams and epoxied around that…

More or less my plan as well. It just seems like trying to stiffen up the existing frame is more or less a never-ending battle until total replacement. May as well save a lot of time and money, and just replace the whole thing off the get-go if you’re going to go beyond some really simple mods.

Off the wall idea: I wonder how much it would cost to make a custom extruded rail to match the profile of the dual makerslide rails? And how much more cost and weight it would add to either make it solid or at least have more / thicker internal bracing to combat the rotational flex? 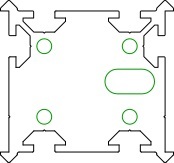 It would be expensive and heavy, but if it did the trick, it might be worth it. Assuming someone actually developed it.

You’re probably looking at $2,000-$5,000 for tooling/NRE costs and a 500 lbs minimum run. Even then it’s not clear how much better performance you’re going to get over a $15 steel t-bar and some drilling. So, cost benefit analysis would tend toward the cheap mod or an alternative that’s not a drop in replacement. But I’m not that kind of engineer, so I could be wrong.

I plan on using Opendbuild’s new C-Beam. It will require a new x axis gantry plate, but that’s no big deal. I mean, we have a cnc machine, right?..hahah

I have the z axis already ordered, it ships out tomorrow!

http://openbuildspartstore.com/c-beam-linear-rail/ …
in case you were curious

I’m looking forward to seeing how that comes out for you! Should be very interesting.

Torsional rigidity is roughly proportional to the maximum inscribed circle of the cross section, so a C-beam won’t help much with torsional deflection. It will help with deflection due to bending loads.

I figure when if I ever plan on doing the 40X40 I will increase my width to the 1500mm at the same time. Currently using the 30min with no complaints.

My problem there is that if I start re-designing parts… the re-design doesn’t stop until 'bout all I have left of the X-Carve is the controller and the steppers. lol

I think it’s called the CNC of Theseus.

Heh, granted! The stock X-Carve is just reeeeeally weak at the 1m scale.

That is an interesting fact. I would have thought being basically a 40mm x 80mm beam it would have much greater torsional rigidity.