46mm (Festool) hose bracket for the top of the X-Carve

I designed and just uploaded this bracket for Thingiverse which snaps onto my 46mm Festool vacuum hose to stop the hose from rubbing against the X-Carve drag chain. To install it I replaced the M5x20mm bolts that mount the Z motor with 25mm, installed the bracket on top of the original nuts and added a second set of Nylock nuts to secure the bracket. The hose snaps nicely into the bracket, but just in case something more is required I modeled in a passthrough that could be used for a Velcro strap. 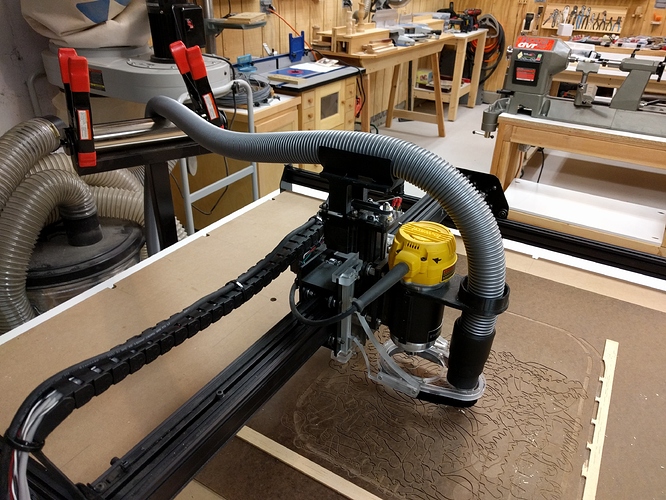 Very neat idea, I was thinking about different ways to support my vacuum hose so it doesn’t rub up against the machine itself too much and I thought I would have to settle for suspending the hose from the ceiling but I think I’m going to go with this approach instead! I also like the added bracket at the top of the router to keep the hose vertical.

Right now I’ve got that heavy roller stand “feeding” the hose to the X-Carve which works (I had to put the clamps on the ends to keep the hose from sliding off), but it’s a little clunky. Someday when I get around to it I might attach a removable piece to the back of my X-Carve workbench with the rollers built in. I should probably make sure I don’t want to start using my big Delta dust collector instead of the Festool CT26 first.