Just picked up a cnc for plasma cutting and the set up for the y and x I do not like so i plan on getting maker rails for the y and x to make a custom version of a 4x8 machine. I will be ordering rails/hardware and making plates for both ends and brackets to bolt to the cutting frame. Mostly moving motors to the xcarve plates and ordering longer belts to make everything work.

I understand that CNC electronics have to be shielded from the EMI of the Plasma cutter. Have you tested this or are you making provisions in your design? A kit to turn an X-carve into a CNC plasma table would be interesting as it could make CNC plasma more affordable.

I have the breakout board and system from this cnc and just putting the rails and motors onto this frame. Yeah the x carve stock systems may not be able to handle the hf but I think the hypertherm i have isn’t with a hf start. I’ll be posting once I get more orders in and get the rails and parts.

really interested to see this build. Since it’s a non-contact machine I would think those 270oz (?) steppers should be more than adequate to move the gantry, since that’s about all it’s going to be doing.

Yeah I think once I get the plates made for attaching the maker rails and swapping the motors it should glide nicely. It wont be doing fast turns or high to low speeds so for cutting things out it should work for what I need it to be until better upgrades. It has a basic breakout board and thc that I have to set up. Will I be able to do what the y axis setup for two motors for y to be wired to the breakout board? This model of cnc plasma has one motor for the y and because of the crappy design it has it is a pain in the ■■■. With the maker rails and basically a soild xcarve setup with the wheels there will be no play with the belts being tight. I’ll also be bracing the table alot more so I can put heavy plate once I get to that point.

I’ll be attaching 2 1800 size rails together for both y sides and then the x will be braced. Still working on the drawing and model for what it will look like. Want to match as close as the design this has but add more things in also like mounts for cameras and whatever else later down the road.

List of parts for building the 4x8 rails for the cnc table. Only hardware that I need. Swapping motors and bolting rails to the table parts. Going to mill a custom mount for my cnc machine torch and for the floating head piece. 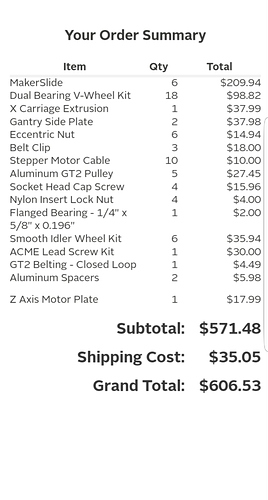 Are you planning on making a step by step conversion guide/tutorial when it is done?

Yeah going to have a build sheet of everything and upgrades on the way for how its doing. Going to post some renders right now of how it will look and then once the parts come in I’ll post those also.

Few renders of how it will look and build sheet of parts. I have the controller and motors so that’s just for the x and y parts.

Nice build what software will be used to run the gcode and for CAM?. Its Just floating head or will add torch height controller.

It has some software like sheetcam and some other software that came with the laptop but I wanna try fusion 360 to make the cam and code and it has a floating head and thc.

Any concern with the belts getting burnt by flying slag? I know most all of the slag is blown through the cut down, I just wondered on a long enough timeline if they would eventually get some errant hits.

Wont have a problem with anything like that since it will be shooting down on the floor and once steel prices go down a little, I’ll be making a water table to get the sparks and dust in one area.

Yeah I plan on making a water table soon once steel prices are down and help with slag and sparks/dust.

Some progress of the x carve cnc plasma build. Have to stlll order a new motor for the z and look up my thc controller. Got it moving and firing so just need to do calibration in mach since I am using the smaller pulleys and setup. 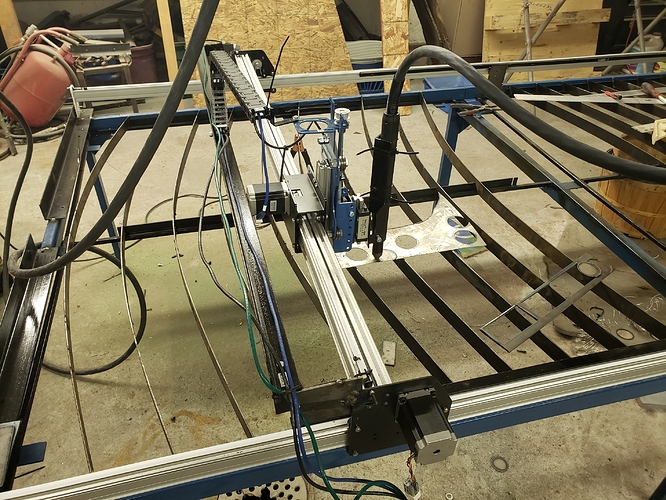 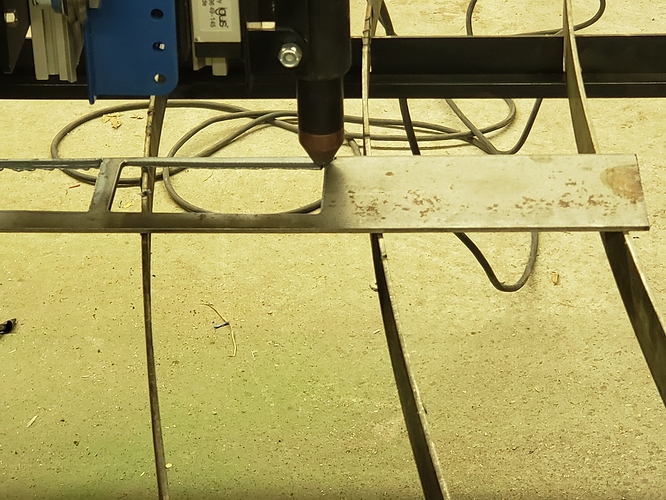 This is really awesome. Great job.

Thanks Luke! I’ll be posting some videos up soon of the progress and parts list. Still have some tune ups on things to get it perfect.

First part off the machine. Still have some work to do with the z axis setup and bracing. 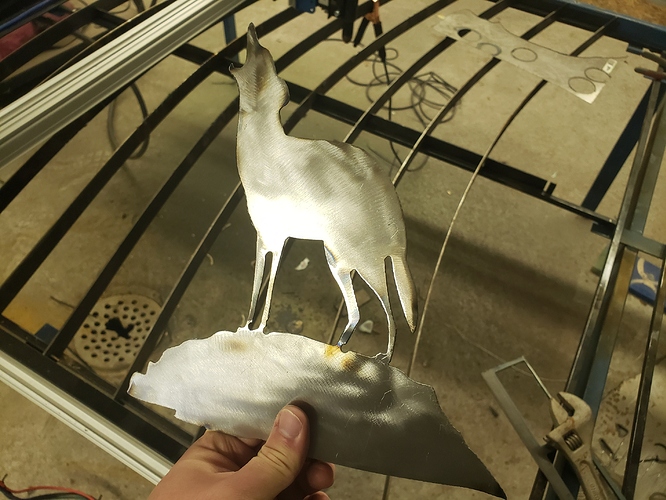