5-foot Camera Slider that's NOT based on Makerslide

I wanted to make my own camera slider/dolly design. Of course I could have just bought a length of makerslide and some V-wheels, a top plate and blah blah blah, but that’s no fun. I was also not confident of the V-wheels’ ability to hold my DSLR with a large lens and perhaps a battery pack.

So, I based my idea off of the DIY Perks design, using the copper pipe (because pretty) and the rope pulley wheels. My dolly is more basic than his, and I decided I didn’t want to drill into the pipe at all, so I designed my own ends and some center supports and cut them out on the X-Carve. After staining and finishing, here’s where I’m at so far: 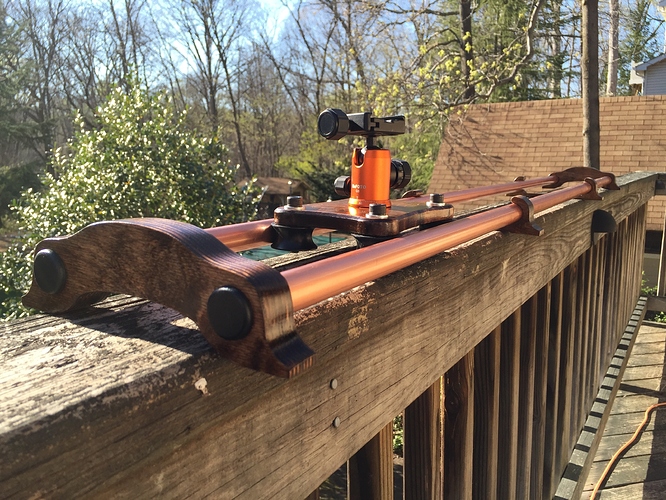 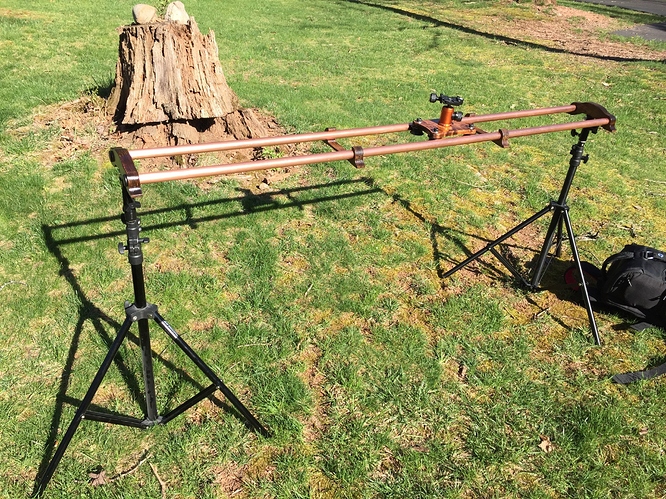 I shot some demo stuff but wasn’t happy with it. The stands I was using are too wobbly. I need to use tripods instead, but I had to take one of them apart for the ball head. I also think I need a better ball head or maybe a fluid pan head because my pans were all jerky.

Anyway, other issues aside, the slider works wonderfully. It’s smooth and can bear lots of weight without any problems. The rails would bend and deform before the dolly gives up.

My next steps are:

After I replaced the shaky light stands with tripods, and put a nice ball head on there, I shot some footage I’m actually kind of happy with.

Here’s just a straight pull with no secondary camera move:

And here’s a pull with a pan at the beginning and end.

I did run Youtube’s stabilizer filter on them, but they looked fine beforehand. It was really just to get rid of hand motion by me, rather than anything in the slider.

This is awesome! Great design!

That is really cool, man!

Above and beyond the fact that, from the videos, it works really well it is just the prettiest piece of photographic equipment I have seen in a long time.