A little confused about wiring a J-Tech 2.8W Laser (SOLVED)

UPDATE: I emailed J-Tech the same question that I asked in this post and they responded with the following:

Thanks for the email. The short answer to your questions is “yes”.

You can leave the spindle wires where they are for your spindle. We just used them because most people have the Dewalt spindle which does not use them anyway. You can just leave it like it is on your machine and use the extra long Molex cable we provide in the kit now to connect the laser to the screw terminals with the yellow and black wires.

When you run the machine you can do like you say. Either pull out the plug from the power supply or push it to the “off” position. I will say another reason we went for a straight connection to the yellow and black wires is the noise generated from the power supply. Turning the OFF switch might be fine, but it leaves tons of noise on the laser signals. It might be better to just unplug it.

I am currently wiring my new 2.8W laser I got to my 500mm X-Carve with the following setup:

X-CARVE
I have a original X-Carve using the wiring setup described here: http://x-carve-instructions.inventables.com/xcarve2015/step14/ which consists of a 24v Spindle wired to the terminal block on the back of the gantry, which then routes through the cable track and into the left two terminals of the green connector (see picture with spindle wires labeled). 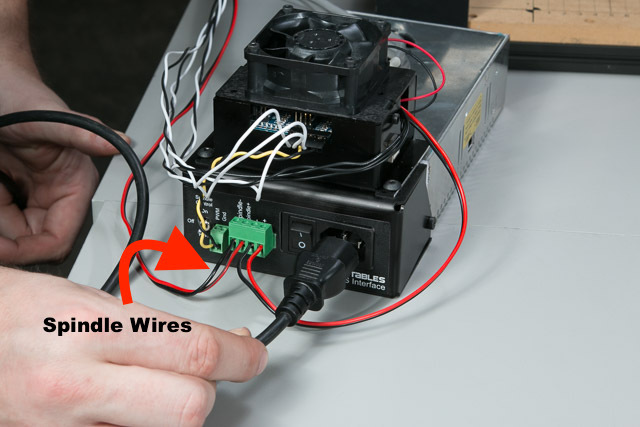 J-TECH LASER
All the wiring for the laser is the same as in the instructions except Instead of running the laser signal wires on the existing “spindle wires” I have used a separate pair of wires.

Here are the questions I have:

1. Can I leave the "spindle wires” attached to the power supply when using the laser since there is a different pair of wires for the 24v spindle and the laser?