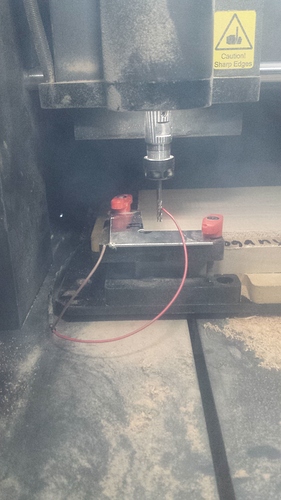 As of late, I have killed my second limit switch on the Carvey Smart Clamp. While I am not sure exactly how they fail, they start requiring more and more force to actuate, leading to overly-deep first cuts and an overall too deep of a cut. Replacements are not available for sale, and I could not wait for the 5 days (over a weekend) for a new switch to get to me from support.

My solution is to disconnect the faulty switch and remove its parts from the clamp entirely. Then, I connected a 1/16 inch aluminum plate to the clamp, and wrap a wire around the bit. When the bit touches the plate during the z-homing cycle, the circuit is completed and the “switch” trips, just like a normal touch plate. All you need is a little 1/16 aluminum sheet and 2 wires.

Been there with the smart clamp switch. The support folks at Inventables have been fantastic about getting me a replacement, but I start getting the shakes while waiting and not being able to carve. This is a great idea!

Since they sent me a new smart clamp the last time, rather than just a switch, I guess I could take the old smart clamp body and create a stand-by version to keep handy for use when/if required. Use the plug from the old switch for a fast connect from the modified clamp to the Carvey wire lead. I haven’t measured, but 1/16 is the height of the button? gives a pretty accurate zero? Also, I’m assuming you let it zero and then immediately stop process and pull the wire off the bit (?). Any thoughts on a way of connecting that would automatically disconnect? I always work with the hood closed, but I guess a person could use a magnet to fool it and using a gator clip, just yank it off as soon as it touched.

Sure wish they would stock the microswitch. They seem resistant to the suggestion for some reason.

I wrap the wire around the bit in the opposite direction to that of its normal rotation. That way, it doesn’t eat the wire. Also, the wire is short enough that it just pulls off of the bit when it makes its initial move to start cutting. No intervention needed.

The 1/16 inch plate is taller than the stock switch by a few tenths of a millimeter, but it is close enough for me. If you really wanted to get accurate, a little sanding with a dremel would get you right down to the standard height. It has yet to give a bad reading, and has been perfectly reliable.

As for disconnecting the bit wire, that happens on its own. I take the precaution of winding the wire around the bit counter to the normal spindle rotation, so it unwinds as the spindle starts. This, coupled with the first movement of the spindle and having the wire cut quite short, ensures that the wire falls off/unwinds quickly and without any outside intervention.

I have gone over the spindle with my multimeter in continuity mode, looking for a connection point to replace wrapping a wire on the bit. There may be potential for a permanent electrical contact point on the very top of the spindle, where the c-clip holds the “fan” on the top. For now, though, the wire works quite well.

Gotcha on reverse winding the wire on the bit. Makes sense. I was trying to get too complicated.
As I understand it, the movement away from the sensor plate pulls the wire off. Does this mean you attach the wire when the bit is at the front of the machine ready to zero, rather than at the home position at the rear of the platform? Hit carve, wait until bit at front, pause, attach, then resume? Just wanting to make sure I understand the concept. This would obviously be a much shorter attachment wire and less likely to become fouled.
thanks

Yes, that is correct. I let the machine complete its XY homing routine, then pause it when it begins the Z homing routine. Attach the wire, and let it go, as the wire bit will pull free from the wire as stated before.