Accuracy seems to be an issue

I’ve worked through the math to get my x axis and y axis running the correct distances when told. I’m not so concerned with the z axis.

Aside from random steps being missed, and I mean random, I’m having some real issues with consistency which may be weather related, the few times that I have been able to cut out a couple of simple easel circles, they would have been more accurate had I held a scissor between my toes and gone to town.

So I created a little work around. I’m just adjusting the bit size in the computer and it seems to work better.

I’m creating two identical circles, side by side. I cut one out on the inside outline and one along the outside.

The larger circle should fit inside the smaller hole. Not the case. So I decided that I would tinker with bit size in order to compensate for the actual line.

With a 1/16 bit, I’m increasing the computer bit size to 13/128. That seems to work, however, they still do not fit. In fact, they are not circles. Tight here, gap there. I figured that any calibration errors wouldn’t be a problem because both circles are being cut with the same inaccuracies, which should negate them.

Any flaws that anyone sees in my process? Any suggestions, on or off topic?

Fun as it is to go out to my shop and mess with this thing, it is starting to get a little old spending almost all time with the x carve unsuccessfully getting it to function.

I don’t want to put a nice piece of wood in until it shows me that it will do what it is told with at least some consistency and reason for its actions. So far, I’m missing those things.

Hey! That’s my evening date! I just have to figure out what a “trimpot” is. I assume it’s somewhere in these forums.

When you make an inlay, do you have to go through the same process of tricking the computer?

Oh, it’s trickery. I’m nothing if not cunning.

Yeah, what I’m actually going to do is make cool looking dovetails for my bedroom window trim. I’ll post an update and appreciation letter later I hope. But I also want to make a wood cutout of my head to remind my wife just who deceived her into this thing called marriage. See? Cunning!

And my daughter and I will be starting a little “lemonade stand” if you will. But I’ll post about that when it happens.

Yeah, I gotta get the terminology down so I can search for things properly. Thanks for all of your help

Hey, here’s a question. The z axis makes a whining noise when it works. It always has. In fact, I was talking with my brother (he laser cuts; he’s a solid man in my estimation) and he was talking about his smaller laser (his lasers are from full spectrum in Vegas, nice people I noted when I was up there) making the same sound on the z axis. Don’t know if it’s belt or what, but there’s a definite whine. Not coming from the motor. My belt appears to be placed correctly. Wheels seem nice. I don’t want to add lube or a lithium grease. My gut tells me just ignore it.

Does yours make a whining sound? 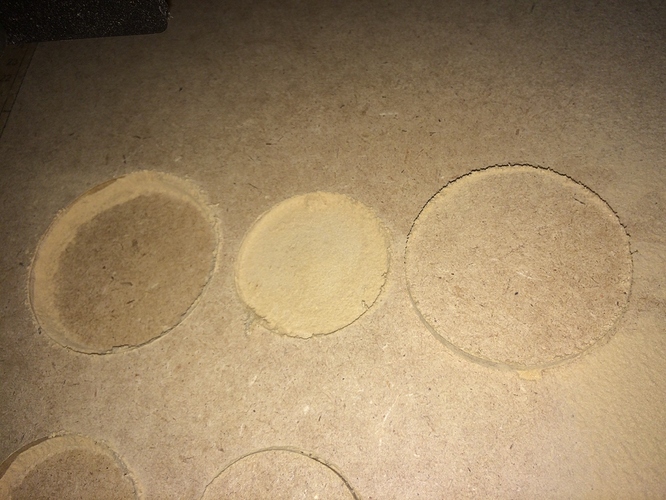 I’m going to go with the old operator error on the first attempt. Second is as close to perfect as anyone should ever expect. Thanks for mentioning that app.

Thanks again for all of your help.

Cool, I won’t worry about it.

What does account for the difference between the two circle example’s cuts?

The example is two circles, d=2", side by side. Cut one inside, one outside.

Is the difference the width of the line? the oscillation of the router bit? The inaccuracy of true bit dimensions vs advertised?

I make a point of taking a digital caliper to each new bit i am going to use. Then I only keep that one bit of that size for use until it either dulls or the atoms holding it together go on strike. (it breaks).

I have found that with the el cheapo 1/8" bits I find on amazon that I buy in multiples, though they function great and last a reasonably long time, can vary in diameter by as much as .002". usually going to the smaller side.

No Caliper? Harbor fright ( yeah that’s how I wanted to spell it) has them and they are of acceptable accuracy for a hobbyist IMHO.

Thanks for the response. I have a cheap digital caliper from HF, the numbers still don’t add up. If I’m not too tired from bustin my hump all day (j/k I like my job very much) I’m going to get some accurate measurements tonight. I don’t think that the numbers will add up. I figure if they did, then an inlay app wouldn’t be necessary. Just cut one outside and one inside. But that’s not the case for some reason. The inlay app works great. Wonder why.

I can’t get Easel to do accurate dimensions either. I tried a simple 22mm hole with a 6.31 bit (measured with calipers). It consistantly comes out as 21mm. I put the same SVG thru FEngrave and it worked, so my steps/mm, and bit diameter are correct. Easel just messes things up.

Maybe it is trying to stay “inside the line” on a “Fill” operation. I don’t know. Any thoughts?

I like being able to specifiy different depths with Easel. Too bad the dimensions are all bad.

Maybe your tool is a little small? My bits tend to be a little off.

My tool is not small (I measured and cut with another cam, fengrave, with no inaccuracies).

Scaling is a workaround. But it causes other problems. What used to be at 0mm, after scaling, is now at .3mm. Scaling should have no effect. Easel is bad.

I had triple checked it. I even made the width of the line surrounding the fill, in ink scape, a robust 5mm, to see if that had an effect. It did not.

I can send the ink scape svg. Where to? Thanks for helping.