Which spindle/router are you using and at what rpm?

Ignore the melting if you have it. Cycle second turn will clean all.

I was test cutting some of the extruded acrylic extras I had laying around and my first few tries left a big blob of melted plastic stuck on my bits. After reading this thread, I tried it out again tonight with much better success. The Easel default feed rate for acrylic was 30ipm which is way too slow.

I increased it to 80ipm, my 611 speed setting was ‘1’ and I left the default depth of cut and it worked out great. Now I’m ready to do some real stuff.

Note: I used the bit I already had in the machine which was a 1/8" ball nosed bit and I did a fill cut. I had some interesting lines inside the cutout area. I kinda liked it.

Just cut my dust boot parts, everything came out well except, my pocketing was set a little too fast. at least I believe this is the reason for a slopped side (see photo below) everything else came out perfect.

it took around 2 hours
doc = .02
feed rate was 85ipm except for the pocketing which was 95ipm. it didn’t break the bit but it did have that slope.

I did however screw up when starting… I had the geometry set wrong so the bit buried to make the first pockets. It snapped but it did survive for a few seconds cutting into .25" of acrylic which was impressive. 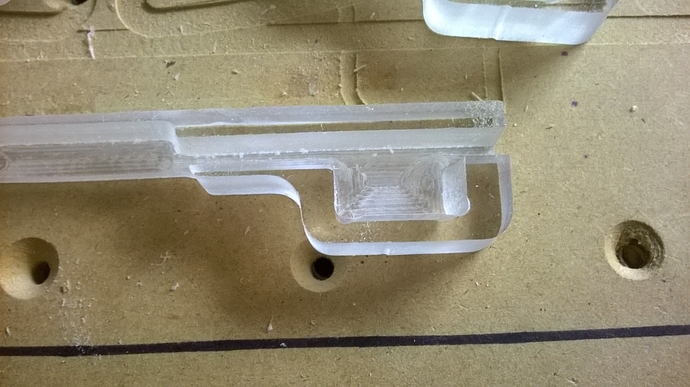 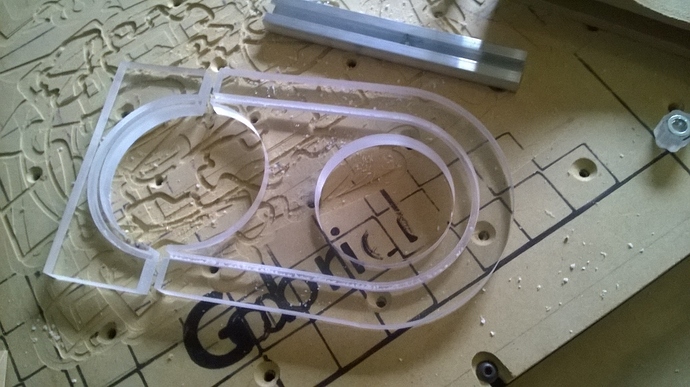 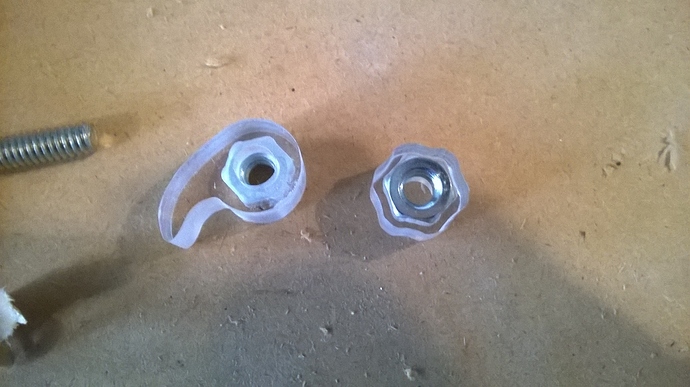 yesterday I had my first cut in acrylic and I just want to thank you for all the good tips.

I’am very impressed with the result that it came out that good.
The edges are very sharp. 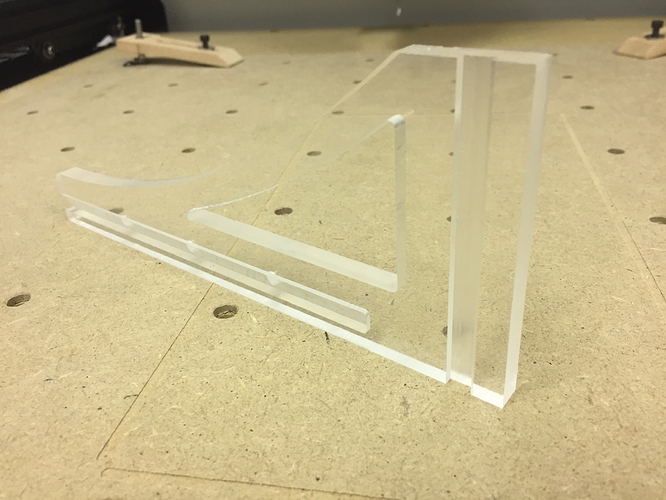 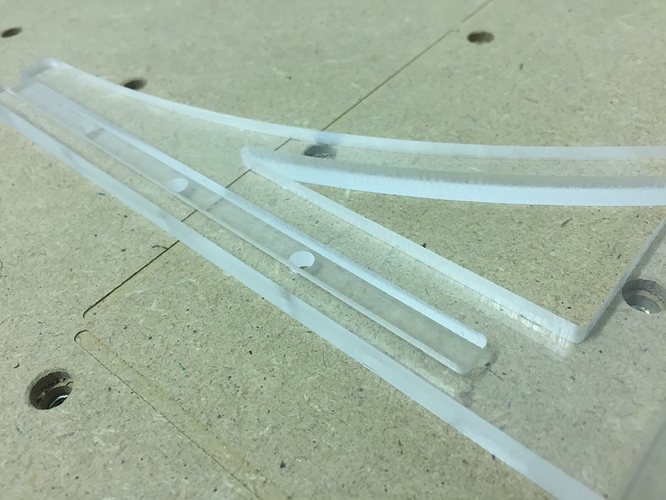 Perfectly great result, cleanest acrylic cut can be. Out of subject, you’re scratching your machine bed. One simple suggestion for that; prepare your profile cut out toolpath seperately from others, make zero point lower down point instad of up corner. Zero your bit on your machine bed (Top of your waste board), and rest is same, even you can give mm or two extra for cut, your bit never touches to waste board like that. Cheers.

You are right, I set up the zero point of the toolpath in the upper corner.

Thanks for the suggestion. It sounds reasonable

I will try this method the next time.

I was having a TON of problems cutting acrylic. I used all of the tips from this thread and still, the cut was not weldable and required prep after.

I know tip #1 seems pretty obvious but being new to this hobby, I thought I had it wired correctly to the VFD and it turns out when I slowed it down to 1 RPM, you could see that FWD on the VFD was running the bit in reverse. I rewired the VFD and it now runs in the correct direction.

I let VCarve determine the feed rate, and I am running at 17,000RPM with a .021 depth of cut per pass. The feed rate is pretty decent though, I would guess over 100ipm closer to 130ipm.

You have any work I can see with that bit? I might bite the bullet and order one.

Can someone tell me what those flex tubes are for? Are they for cooling the bit/blowing the bits away or your using it to vaccum up the bits??

What is used for the air supply? IN that one photo I can only see the tubing… wondering if its connected to an air compressor with a valve, etc… I am just trying to learn how to engrave and cut acrylic.

I am just getting started using the MPCNC set up. I am using a 500w spindle from Amazon and a 1/8" 45 Degree V Bit. Not sure if that is the correct bit for engraving but right now it looks ok to me.

I need to figure out how you get your part out cleanly. I set up Estlcam with holding tabs and have been using a hack saw blade to free the part but not sure what the best practice is…

looking for any advice that can be shared…

I spoke too soon the engraving is spotty at best… more times than not the tip gets clogged with melted acrylic and then it ends up ruining the rest of the engraving… need to figure out what type of bit to use.- speeds, etc. 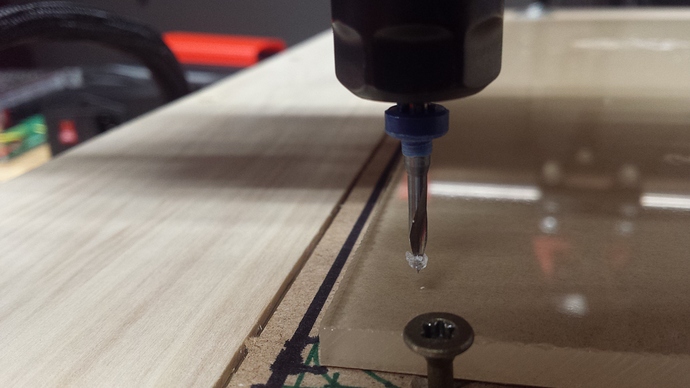 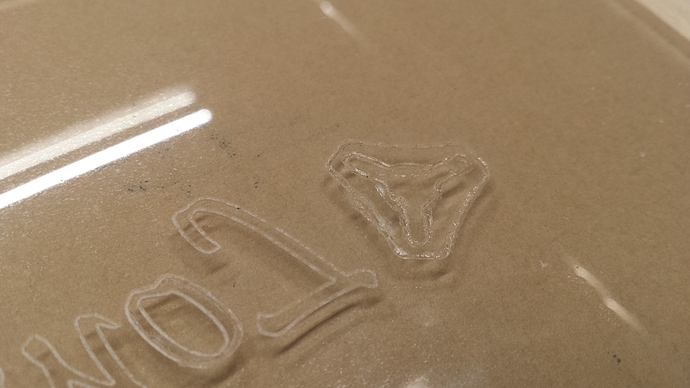 I was using compressed air blowing on the tip while it ran.

Extruded Acrylic ? I didn’t realize there were variations… can you explain?

Also I was just trying to etch/engrave into the acrylic and not cut it per say… maybe you mean I should be using a different tool bit?

so its not possible to engrave “plexi” it has to be cast?

Cast acrylic is made as the name suggests, in a mold which is normally pre-heated. The cast method allows the molecules of the material to bond together into long chains, which normally delivers greater density than extruded and because of the complex molecular bonds provides strength. Extruded acrylic is made by heating and forcing pellets of material through a form. This method delivers greater consistency in material thickness but a lower molecular density, hence more brittle. As with so many things, the choice of material normally comes down to the application. I’ve had success carving both types, with cast being my choice if detailing is important, and extruded if I’m making panels for larger areas. I use a different mill end, depth of cut, feed-rate and plunge-rate depending on which material I’m using though generally I’ve found a fast feed-rate and shallow depth of cut is usually successful. A lot of people mention the build up of melted spoil on the mill end interfering with the cut. My advice is to cut faster and don’t allow the mill end to stay in contact with the spoil, which also means good dust collection. It can’t melt if it’s been sucked away!