Hello everyone! I got my x carve up and running and have been doing test runs for a few weeks now and I had a few questions so bare with me because this is going to be a wall of text.

If you look at the bottom left of the middle hex and the one below that, you can see on the sides where the drill bit “wobbled” around while cutting. Do I need to slow down my feed rate? Or speed it up? Or use magic?

(Don’t look at those little, off lines on the hexagons. I had to restart my job and my starting point moved because I’m smart.)

Hopefully someone could help me with this project. I’m starting to start a business selling water cooling parts for PC’s so everything is waiting on getting this project right to sell!

Acrylic dust and debris wreaks havoc on the v wheels I had a speck literally bring my machine to a halt last week when I was cutting some acrylic, I found if I slowed everything down , and sped up the router just a little bit , it made finer “dust” and it wasn’t as bad but I found myself holding a shop vac in front of the bit to keep the pieces out of the v wheels , it looks like you lost steps because of debris to me as long as your wheels and belts are all in check.

While I have been reading a ton more than I would like about cutting acrylic, none of what you said helped me. I have done many test cuts before this big one and I this is the first time i’ve run into some crazy problems like my drill bit slipping.

Yeah my suckit is taking years to ship and hopefully using that would keep dust out of my wheels.

Cut yourself some rail guards out of plexi, cardboard whatever. It helps keep wheels free from debris. I glued magnets onto some mirrored plexi and can be removed easily now. This is skimming a new 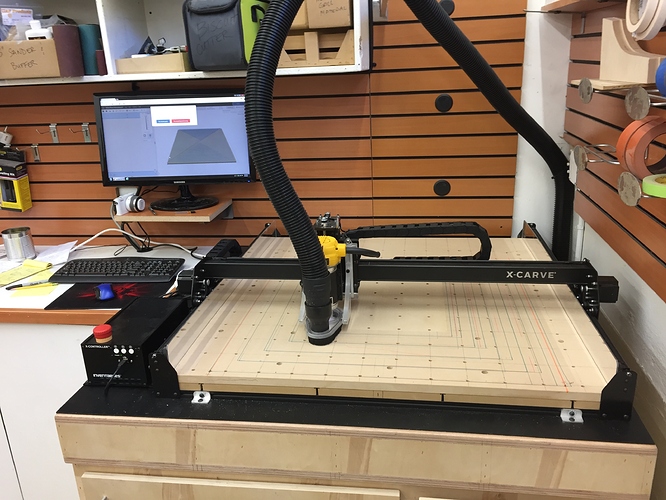 Haha, sorry I was in a hurry typing this up, but I know better to use a drill bit :P. I’m just using the adapter that came with my dewalt and no.

Hmm, may have to give that a try. How’s that suckit working out for you?

Works awesome! I had to mod it. Choice was to cut it in half front to back, or cut a slot in the back. Makes quick removal easier with a bit in place. I cut the slot out, was quicker at the time, as it turns out not much escapes out the back.

Steve… can you post a close up of your dust boot and where you cut it? I am thinking of doing it as well and curious to see where exactly you cut… (and what did you use to cut?)

It’s faster to just be able to slide in the dust boot from front.

It’s a lot easier in Easel to z probe with the suck it out of the way.

I guess i’ll find out on tuesday when my suck it comes in. Always thought you had to take it off to z probe anyways.

Not much dust to clean up after this V-Carve. Suck It easily slips in and out with the cut I made to the back of it. Modded it on a bandsaw. Works for now, may do something like Phil’s and have it separate front to rear later. 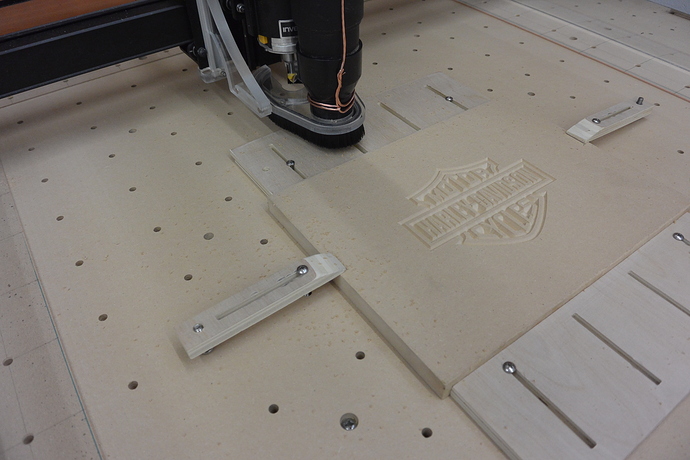 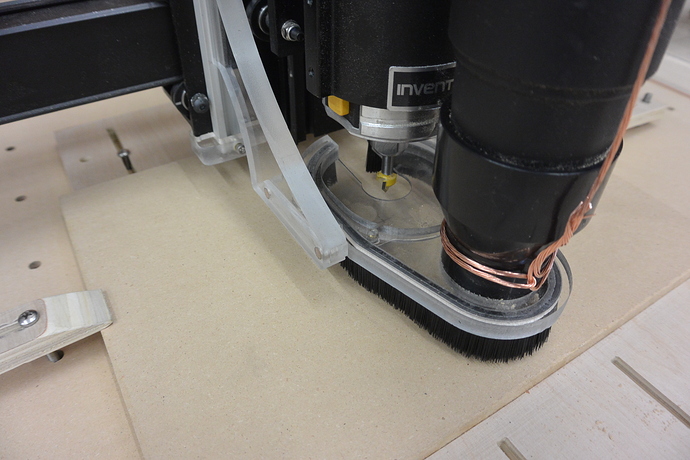 This what found works for me with Acrylics:

I gave up using the Dewalt on acrylic. I have many different bits and I’ve had no success with Dewalt. Using any of the bits that failed on the Dewalt work great on the slower Makita. Dewalt melts everything. I suppose it would be possible doing some things with Dewalt, but I’ve spent too many hours testing and resetting. The Makita works well without as much effort.

Seeing as how im going to be cutting a lot of acrylic for my job, should I go ahead and upgrade to a Makita? And which one should i get?