Has anyone used Adaptive Clearing toolpath strategies with the X-Carve?

By adaptive clearing I mean a toolpath that will clear a pocket by using a helical motion to allow the cutting tool to move down to the full depth of the pocket and then use circular motions with a relatively small step over to begin clearing the pocket (at full depth). The advantages are 1) the speed at which a pocket can be cut, and 2) since the entire cutting length of the tool can be used (instead of just a tiny amount at the bottom) the useful life of the tool should be greatly extended.

It looks like Fusion 360 offers an adaptive clearing toolpath that I may need to learn to use if this is a useful as it appears to be. I really wish it was an option with Vcarve when cutting pockets.

@AllenMassey I’ve used fusion’s adaptive clearing, but it doesn’t always do a small helix and then open up the pocket.

I have just started playing with VCarve’s Ramp option on cuts.
I wonder if you could mimic this with a extremely long ramp and thin Width of Cut setting on the bit?
Being that depth of cut seems to be causing my deflection and gantry flex issues it might no be the best strategy for the XC?
I may play around with this as I do a lot of pocket cutting and anything that will reduce time or improve quality is good

It looks to me like the deeper the pocket the more efficient the strategy. If only two passes are required then I suspect a traditional pocket toolpath would be faster but if the depth require 5 or 6 passes then the adaptive toolpath would appear to be much faster.

I would think the XC can handle an adaptive toolpath easily since you can adjust the step over to limit the stress on the machine. The Dewalt 611 should have more than enough power to make it work.

But until someone tries it, I am just guessing.

What have you seen it do? And was it horrible?

I always get nervous when GWizard gives a feed rate at max value and have yet to have the courage to run a cut close to that feed rate. Although according to GWizard this should have very low deflection once it gets past the initial ramp in.

I am out of poplar right now but next time I get some more I thing I will run a side by side test and see how this actually performs.

It does pretty good, but i use it only for roughing, the paths are not always pretty and can look random on a finishing pass. Other than that its pretty good.

I use Adaptive Clearing for all roughing, then switch to a conventional pocket for finishing. The big advantage is that it is using a constant cutter engagement strategy, instead of a constant cut width. That way, when you get to a corner it never abruptly goes from cutting half a cutter width to 3/4 in one bite. Means you can use a much higher feed rate. My typical pocket clearing on the ink stands I do (in walnut) is with a 1/8" diameter two-flute straight bit. Helical plunge to the full 1/4" pocket depth, with a .100 cutter engagement, and 60ipm with the router on speed 4 or so. It zips that wood right out of there, makes nice, thin, clean chips with minimal dust. The floor is a bit random, pattern wise, so I always go back and make a finish pass at about 40ipm with about .020 engagement on floor and walls. Repeat the finish pass with a .125 overlap. The walls come out so smoothly that I don’t even have to sand them, and the floor only needs very slight touch-up sanding from time to time.

If you go to the linking tab and increase the “tool stay-down distance”, it will avoid raising the tool out of the cut each time it gets to a corner, and will simply move it back through the already-cut area to start the next pass, instead of going back up to safety height each time. You can also set the speed of that motion. I have mine set to lift .010, then use a 100ipm motion to move it to the start of the next cutting pass.

EDIT: This is a piece I have done with those exact settings, this has been lightly sanded on the pocket bottoms with 120 grit on a proxxon pencil sander before finishing. The walls of the pockets have not been sanded at all, save a light edge break at the top with 220, and a single pass with 800 to remove stood-up grain during finishing. 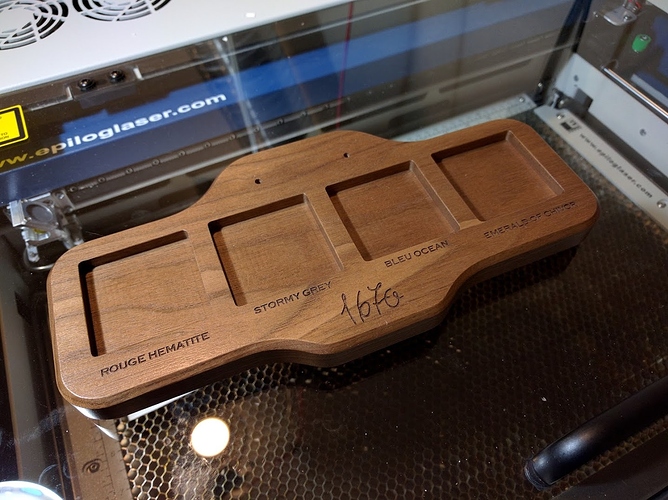 Dan, Are you using Fusing 360 to generate those tool paths?

Your lettering is excellent, I really want a laser cutter.

Yes, both modeling and programming were done in Fusion for that project. I then exported the outside shape as a DXF from Fusion, imported it into CorelDraw, and used that to place the text with respect to the upper left-hand corner. The piece then went into the laser indexed off the top and the left side, and the text was engraved.

I’ve been EXTREMELY pleased with the laser so far! Everything I’ve asked of it, it has done with precision and dispatch. It’s extremely easy to use, as well.

Sorry I got to translate this and and wonder about the speeds for they are quite a bit faster then what i use and I know there is some deflection with the settings I use(I hear the bit engaging if i run the program again). Pine and mdf which are both softer then walnut I suppose

… (in walnut) is with a 1/8" diameter two-flute straight bit.[/quote]
3.175mm bit same as i use[quote]
Helical plunge to the full 1/4" pocket depth[/quote]
6.35mm pocket, that is more then the 4mm I use[quote]
, with a .100 cutter engagement[/quote]
2.54mm vs 1.27mm that is double and quite a bit more then half of the diameter of the end mill bit[quote]
, and 60ipm[/quote]
1524mm/min vs 1000mm/min[quote]
with the router on speed 4 or so.[/quote]
24v dc spindle at 12000 rpm which is max[quote]
It zips that wood right out of there, makes nice, thin, clean chips with minimal dust. The floor is a bit random, pattern wise, so I always go back and make a finish pass at about 40ipm with about .020 engagement on floor and walls. Repeat the finish pass with a .125 overlap. The walls come out so smoothly that I don’t even have to sand them, and the floor only needs very slight touch-up sanding from time to time.

Am i doing something wrong in fusion for the settings or is there another reason you can get away with these higher settings?

I can do it because I’m using the DeWalt instead of the 24V spindle. At speed 4, that’s turning over at probably 18000RPM, give or take a bit.

And your calculations are quite correct, I’m engaging approximately 2/3rds of the bit during the cut, the high-speed-machining toolpath lets me do that without risking huge spikes in tool load at corners that might break it or start massive chatter. The router has no load sound at all, it sounds very nearly like it’s spinning no-load as its cutting, just the normal whine of the high-speed motor and the bit buzz. I could probably actually push the feed up to 80-100 ipm without any serious trouble, GWizard would indicate I can, anyway. I’m just pleased with how it’s working as-is, so I really feel no need to push it harder.

For reference, I have the bolts-vertically-between-the-rails X-stiffening mod, on an otherwise unmodified X-carve frame, running the NEMA-23s and an X-Controller.

Not counting four that failed for various reasons, I have now made 73 of those pieces. So far, I am on the second bit. The first one died to my own lack of knowledge, when an early issue with a G28 command ran it through a hold-down screw in rapid travel. Amazingly enough, the bit still cuts fine! I just swapped it out on principle. That was at about piece 15, give or take. Since then, it’s all been on a single bit for the pockets. As far as I can tell, I can more or less ram the 1/8" bit through the wood as fast as I want to, as long as I compensate with RPM to keep my bit cutting well. Particularly in an open pocket like that, where the chip extraction is clean and total.

I would not have tried settings that fast with the old 24V spindle, mine died after perhaps ten operational hours anyway. The HSM paths just let you take out the material a LOT faster!

@DanBrown I am not sure what you mean with HSM paths?

Anyway I think I will cut down slightly on the feedrate and maximize cutting depth after this info.

@AllenMassey I just watched your video and there are 2 settings that could speedup stuff a bit.
1 max z movement which is limited to be able to hit stop, the machine can do more (setting in grbl)
2 at the last tab (in fusion) you can change the no engagement feed rate to the machine max or lower but higher then the cutting feedrate, I also added a 0.2mm lift height there just to be sure to leave no marks

“HSM” is a “High Speed Machining” path. It is a toolpath designed to maximize material removal rate. In this case, what it is doing is making sure that the cutter engages a certain amount, but not more. Picture cutting down a vertical wall using a traditional toolpath, with half of your cutter engaged. When you get to the corner, your cutter instantly goes from 50% engagement to 75% engagement as it bites into the un-cut end wall before changing direction. That means your maximum load for your cutting engagement and speed has to be such that the cutter does not fail at the maximum spike of load. With a HSM path, it will never spike like that, so you can run the cutter at maximum engagement and feed all the time!

They’re really handy. I’m certainly no expert programmer, I only know the basics.

Ah… that is what adaptive clearing does automatically in fusion360 right

Or do you need to turn on feed rate optimization?
I thought that was only to reduce feed rate in corners.

Adaptive Clearing is an HSM path strategy. You don’t need to turn on anything else.