I’m trying to import an SVG from Affinity Designer but I’m having trouble with text shifting from it’s original location (and possibly changing sizes). Affinity has an option to export text as curves and if I open the same SVG in InkScape it looks fine. I’ve seen the other threads talking about Affinity (and other programs) not having DPI information in the file which causes scaling issues but I don’t think that is the same as this problem. I get a warning from Easel that it has to scale my imported SVG but that doesn’t explain why the text is shifted unless it isn’t scaling the text transform in the same way it is scaling the paths.

Is anyone else using Affinity? Do you have any suggestions on how to do the export to get it accurate in Easel?

Here’s what it looks like in Easel after import: 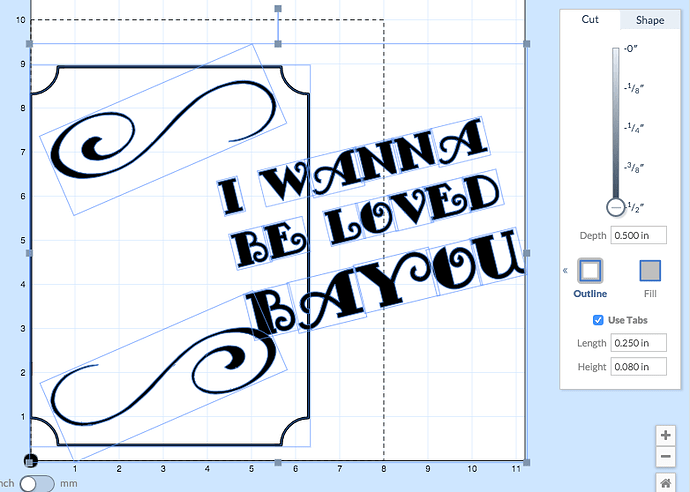 Here’s what it looks like in Affinity before export: 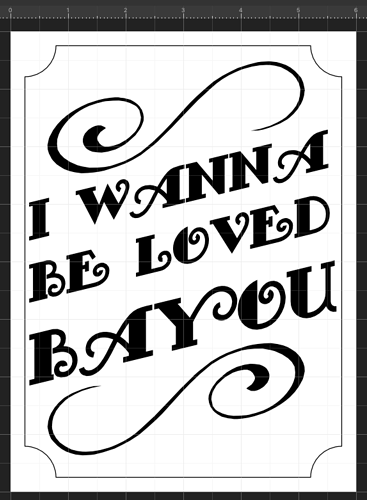 Here are the export options I used in Affinity: 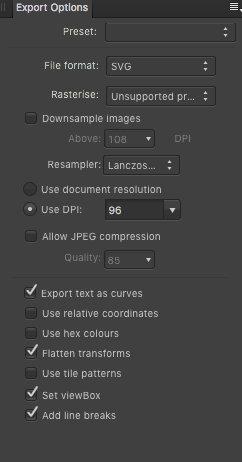 And finally here is the SVG file:

Any help would be appreciated. I’m on a 10 day trial of Affinity but I like it a lot more than InkScape so I’d like to switch to it if I can work out this issue.

My suggestion would be to provide a sample file to the Easel developers — they should be able to fix it.

In the meanwhile, work around this by exporting to a .pdf from AD, import the .pdf into Inkscape, re-save as .svg, then import into a Easel.

You might be able to get the file to work directly from AD by converting type to paths, then merging everything into a single compound path.

I figured out that the issue appears when the text paths have a shear on them. If I only rotate the text and don’t shear it, things look right in Easel. If I rotate and shear the text (as shown in my original post), the text ends up out of place in Easel. So my guess is that Easel isn’t applying the shear properly and this isn’t an Affinity specific issue.

I have a sample in my original post. I’m happy to submit it someplace else if it is easier for the Easel developers.