I am using AI to build my SVG files that I use in Easel. I’m not super smart with AI but know enough to be dangerous. Does anyone know why a file that I export from AI as an svg will not allow me to select shapes inside Easel so I can select the tool path (inside, outside, etc). Some of my AI files allow me to do this while others do not. I have looked at settings and they appear to be the same and the artwork is not in a group. Its really frustrating. Any help is great appreciated.

Although the vector is not in a group, are they joined as a single path?

just a suggestion, I’ve had that issue with other ‘not-so-professional’ software 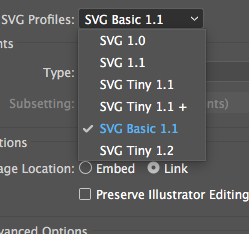 Basic is what I export as.

I will have to look. I know the basics of AI but I’ll have to figure out how Make sure they aren’t single path.

That was exactly the problem. Made sure nothing was compound paths and it worked! Thanks!