I use solidworks but no particularly good CAM software, so i’ll likely convert my files to the free Fusion 360 and use the integrated CAM feature.

Here is a new design I whipped up for the enclosure in Sketchup. I normally use solidworks but quick mockups are much faster in sketchup. I was originally going to build a full cabinet with drawers and space for the vacuum, but the size I would need would make it very difficult to get in and out of my apartment doors. So I opted for this design, where I can remove the legs and use build a standalone vacuum baffle box and tool drawer that can sit underneath.

It is 72"L x 48"H x 40"D (with legs installed). The inside height is pretty shallow (16"), especially since I’m going going to be using a suckit dustboot, however I think with the right hose mounting and a swivel adapter it won’t be a problem. 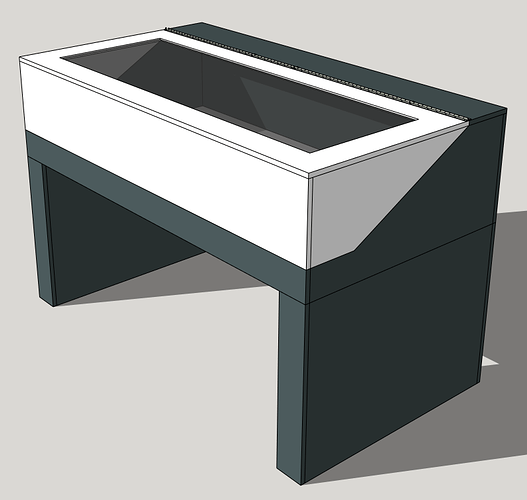 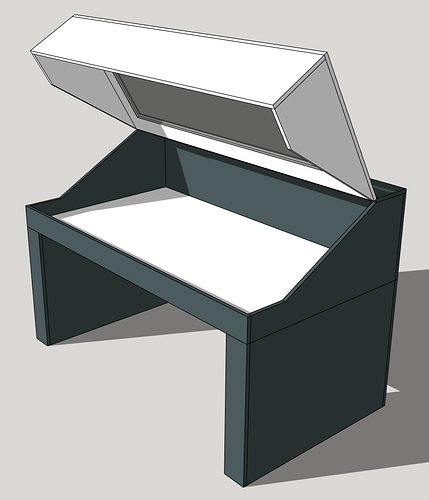 Here is a view with the painted false fronts removed. I decided to build the legs as studded walls so that If I wanted to mount a computer or something off the side later it would be nice and sturdy. IN order to save space on height, I opted not to put any horizontal supports directly under the countertops because once my Xcarve is bolted to it (considering how beefy it will be) it will have all the support it needs. 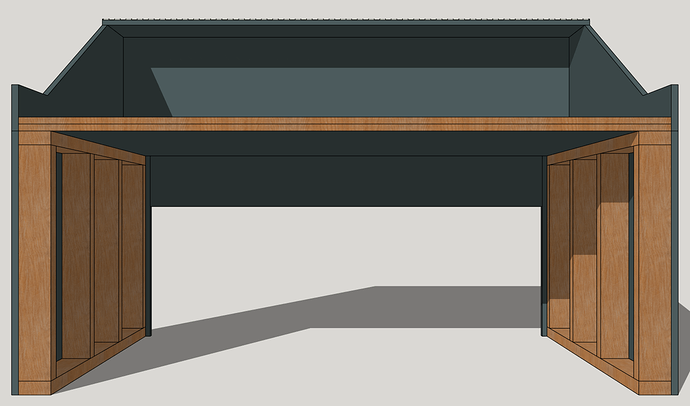 All Y axis brackets have been installed and everything is getting very sturdy! Only things left for me to do now are install the remaining cross bars between the center 1500s (once new gussets arrive tomorrow), install the baseplate, and splice/lengthen the stock wiring.

Decided to mock up the wiring to make sure everything was wired correctly. Everything seems to functional at this point!

However I noticed, and maybe this is my ignorance talking, but it sounds sluggish and tight to me. After watching other videos online others sounded more fluid and moved much more readily in my opinion. Anyone input here? Belts or Eccentrics too tight?

how do the machine move when its powered down?

@WorkinWoods
I’m not particularly sure what is considered smoothly or too tight as this is my first time assembling/using an X-Carve.

I’ve made sure that there are no rattling spots/bumps as I move it around, so there is “smooth” movement in all directions.

But it does take a little muscle to move the gantry around by hand. I couldn’t, for example, just push it around with my pinky (as if that’s an accurate judge of force :P)

You want to be able to move the wheels with a couple fingers. Try to grab a wheel with your thumb and finger. If you can’t turn it , your eccentrics are to tight.

Also I know it seems silly. But double check your 1mm spacer between the wheel and the plates.

You say smooth but do you mean slow? Move rates in video seemed slow, well below the system capabilities and probably a result of feed rates provided by your CAM software (Easel?)

Thanks for the tips. I’ll give that a try and let you know.

It’s a bit hard to hear in the video, but the Y axis movement is very squeeky and noticeably more difficult to move than the X axis. To be clear, it moves smoothly (no rattles, shakes or bumps), but seems to require much more force to move by hand and is awfully squeeky when powered.- Hence the concern about it being too tight. I wasn’t really concerned about the speeds too much since that can be controlled in easel.

Did some tuning and found out a bunch of my wheels were unevenly tightened. Some over-tight and some too loose. Used your method to gauge a similar resistance and everything moved much better. Thanks again.

Last of the gussets came in today and finished installing the cross members. Moving onto wiring!

The wiring was much more difficult than I expected. My original plan was to simply install 6 feet of stepper motor cable per motor to the terminal blocks on the gantry plates. When I ordered the machine I assumed that X-Carve still used Terminal blocks for the wiring, but to my surprise the new x-carve goes straight to the x-controller from the sideboard. So… short of doing a bunch of staggered butt splices my plan was temporarily out the window.

Luckily, I found a spare 12 port terminal block from our electrical department and was able to mount that to the back of the X-axis drag chain extrusion. This actually worked out much better than my original plan and gave me a great way to handle wire management.

Here are some photos so you get the idea! Pretty happy with how it all turned out. 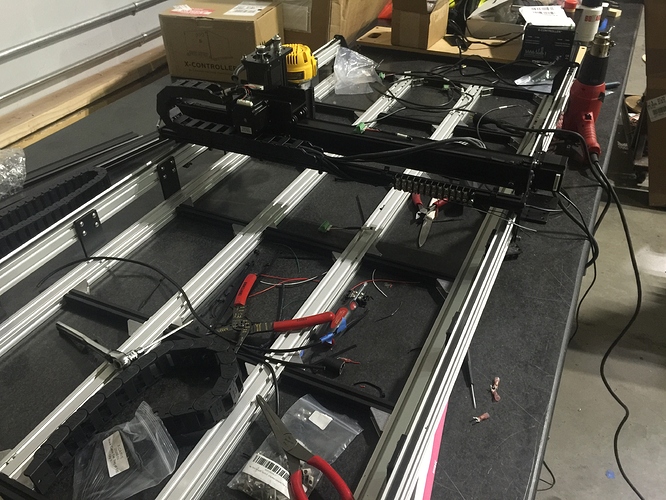 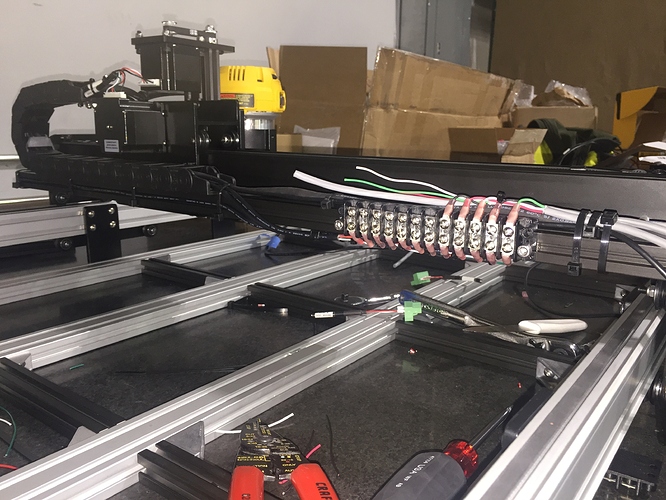 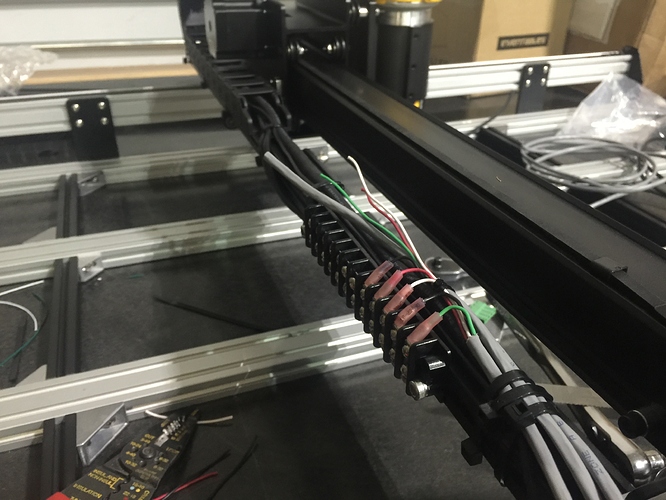 Big update today. I finally finished all of my wiring! It worked out better than i could have imagined.

Here are some shots of the finished wiring. 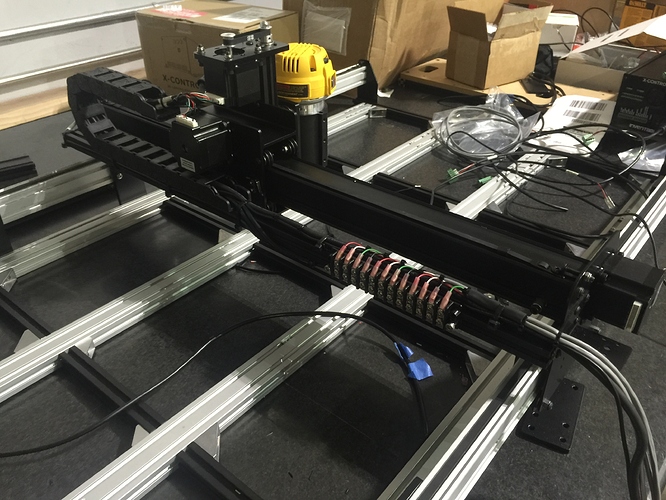 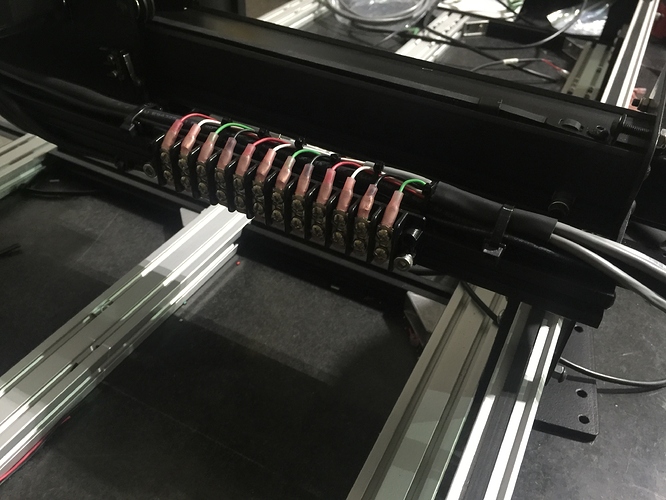 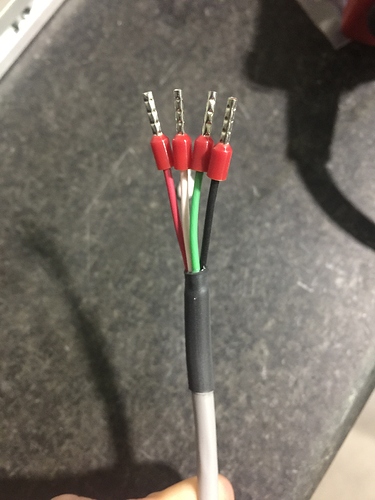 Finally able to move onto the Y axis drag chain. I originally ordered a 1m length spare drag chain for the 1500mm rails thinking it was exactly the same as the factory drag chains and could just link them together… However as I stated before i quickly realized it wasn’t the same drag chain. Inventables customer support was great and sent me a replacement a drag chain extension from the 1000 sized kits and even included a shipping label to return the wrong one even though it was my mistake.

Then I ran into another problem, since I’m not using the sideboard I had no good way of attaching the drag chain and keeping it secure. That’s when I had an ingenious idea. I still had the two 750mm Y axis makerslides that I replaced laying around. I realized that the channel between the V rails on the makerslide is a PERFECT fit for the drag chain. I could use it as a track!! All I needed to be able to do was secure it to the base rails somehow.

So i cut up some of the remaining material I had from cutting my 1800mm into 1500mm rails… spent some time on the grinder taking off the V rails and chamfering them to fit. and came out with some great brackets. So glad I kept my scraps, Nothing gets wasted! 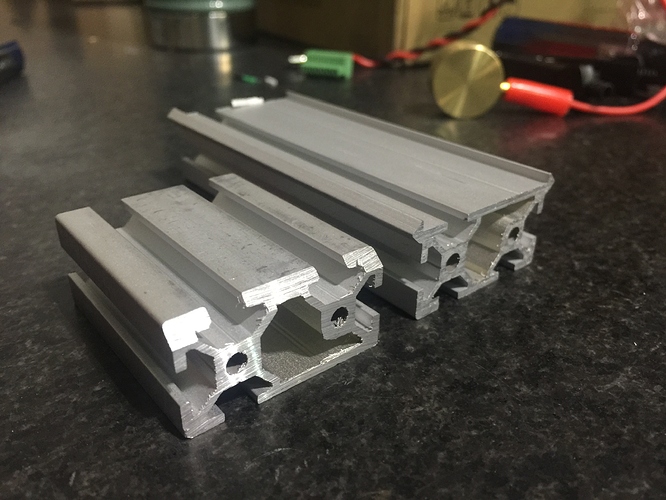 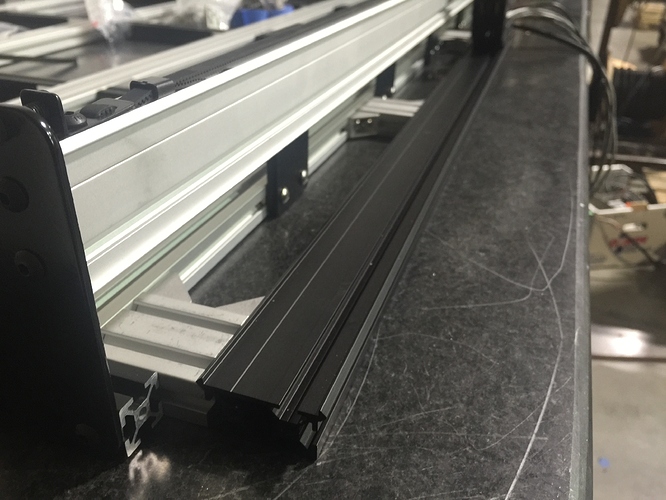 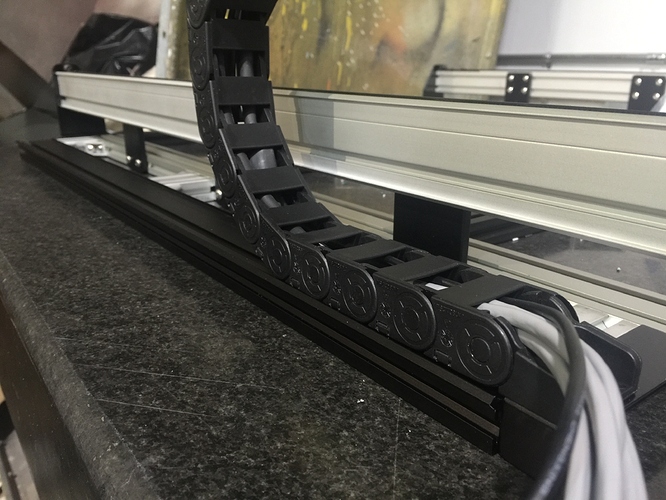 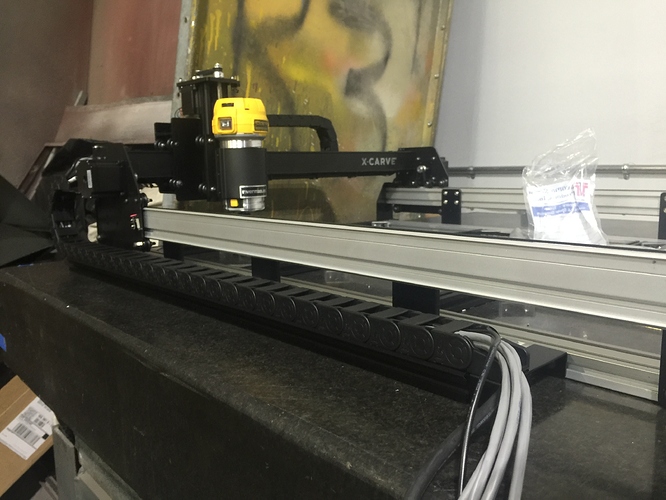 I only have a couple steps left. Install the new baseplate (arriving this week i’m told), install the T-Tracks & wasteboard slots. Then it’s done! (the machine that is)

Shoutout to FarWest steel for giving me such a great deal and helping me with the project! It came out super super well. Even though it’s 125lbs it is surprisingly easy to move so It’s less intimidating than I imagined

Needless to say, this thing is gonna be a beast! 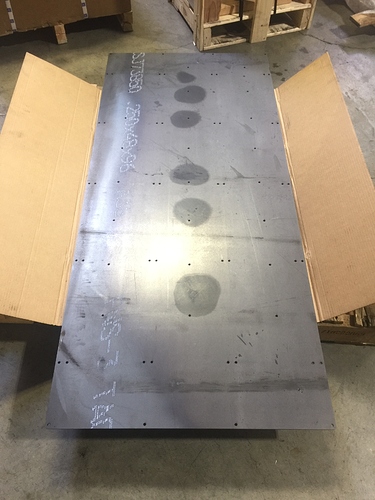 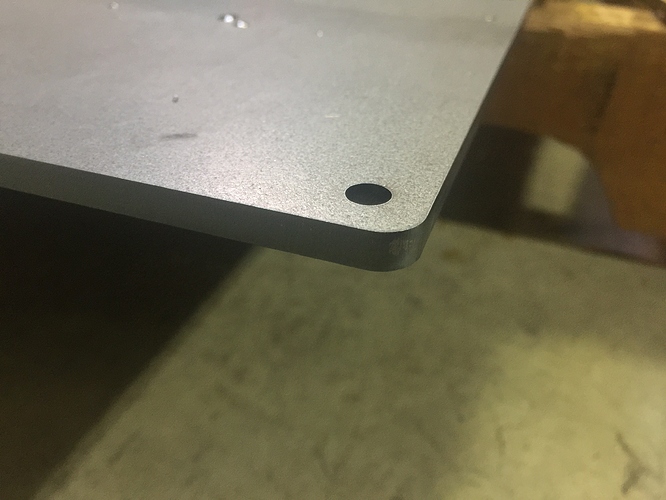 Drilled 54 1/8" holes for my T-Track and tapped each to #8-32. Followed by tapping each 1/4" hole that the MDF panels will use to 5/16-18 and countersinking any holes that the screws would intersect the panels. Deburred all holes with a grinder then off in the paint booth!

Using the Magnetic Drill press to get nice clean holes. 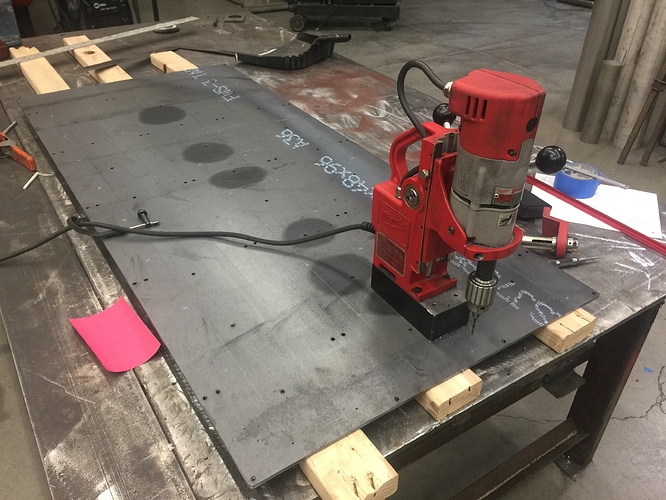 Cleaned and prepped for paint. 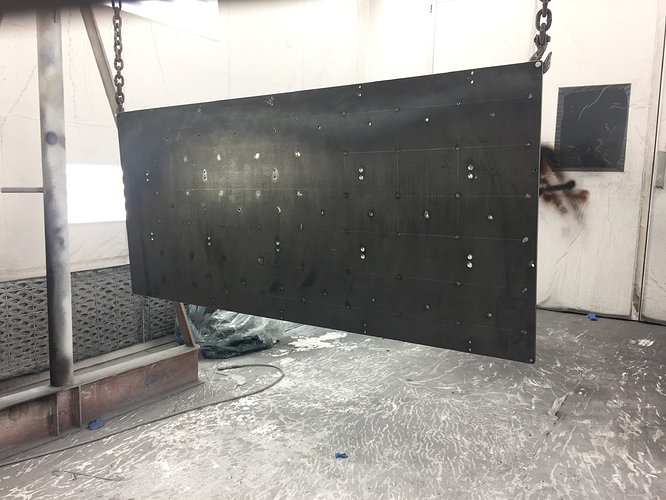 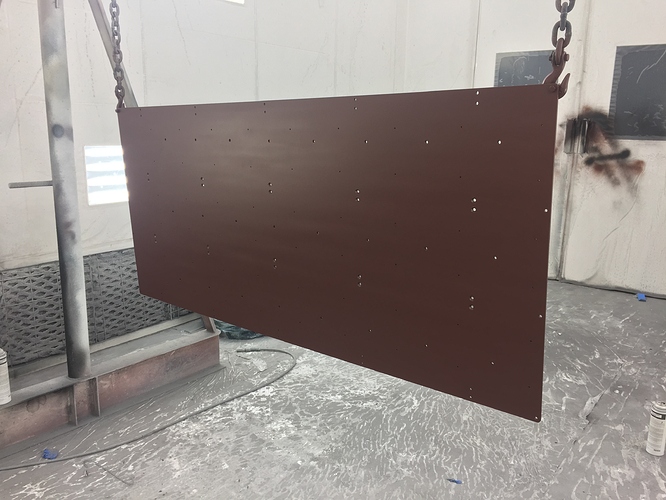 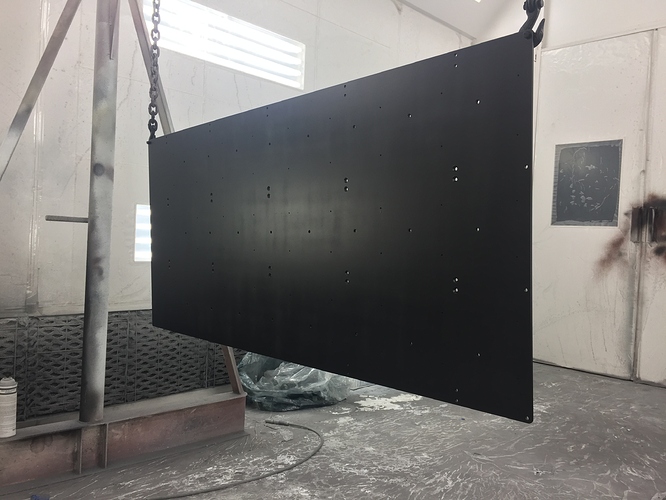 Letting everything dry overnight, then final assembly begins this weekend!

Finally was able to finish getting the T-track installed and the MDF cut to size.

Drilling/Countersinking/Installing the T-Track was one of the most frustrating experiences of the whole project.I learned A LOT about what not to do when using countersinking screws.

Pro-tip: When using countersinking screws… DO NOT drill holes first, measure, then drill the holes in the T-track. This will work just fine with normal screws since they allow for slop, but since countersinking screws pilot themselves into the hole any misalignment throws everything off. I even measured center to center of each hole down to a couple thousands with calipers and i still got misalignment and lots of frustration. Also, if you’ve really gotta get it exact, make sure to use a drill press. Any walking of the drill bit can throw off the hole placement and again, mess everything up.

Pro-tip 2: Instead, make sure to get the T-Track exactly where you want it, clamp it down, and drill both holes together at the same time. That way you know they are guaranteed to be in the exact same place.

That being said, the end result came out really great. I’m so happy to be done with this step and finally be moving onto the last parts of the project. 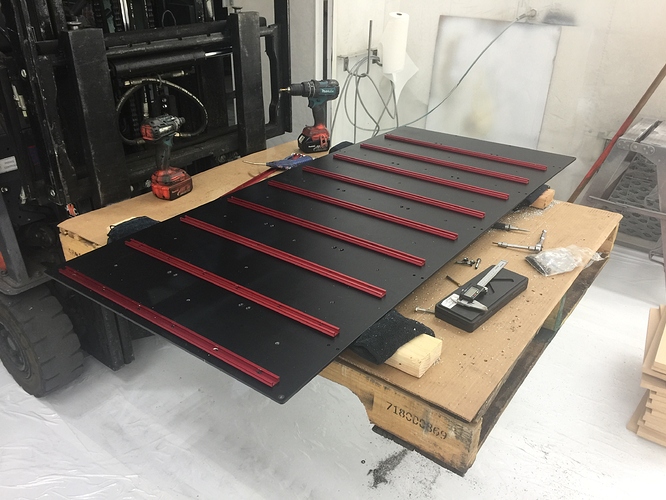 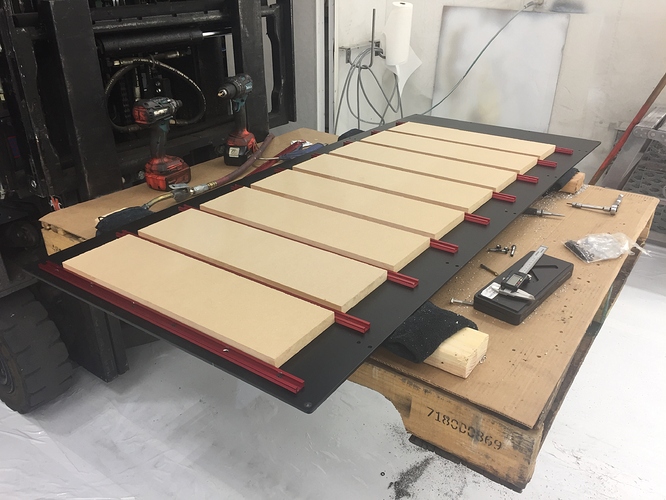 Casual cameo from the forklift as a workbench there

@AdamKemeny haha indeed! I’ve been building this after hours at work so sometimes I have to get creative with my work space

I’m sure you are all getting tired of my constant posts! Thanks for sticking with me thus far!

Now that i’m nearing the end of the X-Carve assembly I really need to start considering my enclosure more seriously. I got some time last night/today to hone in on my original idea.

The frame will be made either from 4x4s or laminated MDF (easier to finish than plywood). It will have leg gussets and supports but will leave an open front for a standalone ShopVac cabinet and possibly toolbox/drawers 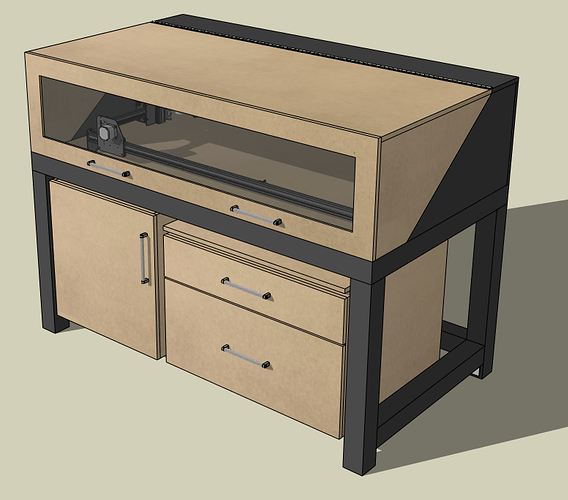 The enclosed cabinet up top will be completely removable in case I need to do some serious service later on. However, during normal use the back half will be bolted down while the front will be hinged and latched. I’ve also left enough space around the X-Carve that I can install sound isolation mats later on if I’m unhappy with the sound performance. The thought behind the tapered design was so that I could have a strong base with easier access to the back without having to space the enclosure off the wall. 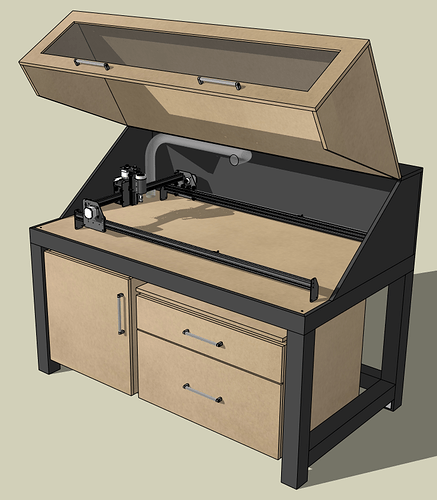 Lastly, The table top will be a torsion box for rigidity. 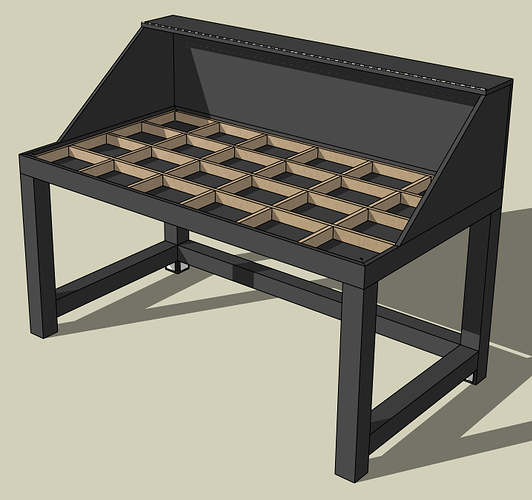 What do you guys think? Any suggestions?

is the machine going inside of a house or office space?

or is it going to be out in the shop?

The machine will go inside my 800sqft Apartment. Thankfully, the room I’m putting it in only has one shared wall with another resident, so i’m placing it on the opposite side.

I’m working on getting a house with a garage, but that’s still a little ways off.