As a NOOB CNC’er, and retired carpenter, I purchased a SO2 kit this xmas. It works great for small projects, but found I needed a larger area. I bought and assembled a second SO2 making the table 51" x 40", to be able to slide a 4’ sheet through. I purchased the Nema 23 steppers including the gshield. As it turns out in my trying to figure out the proper electrical requirements, the gshield only supports 2.5 amps, cooled, whereas the Nema 23’s I bought from Inventables run at 2.8a. I came across and bought a BRD.V3 + 4PCS DRV8825 DRIVERS FOR ARDUINO from Ebay. The shield claims to runs grbl and meets the requirements for my Nema 23’s. It also allows you to clone any axis on the 4th driver. This board was designed in New Zealand. My question is, is there anyone who has used this board? Here is the link. 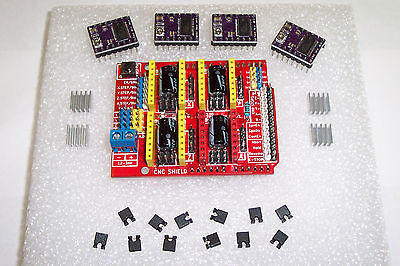 CNC SHIELD FOR ARDUINO, 4 PCS OF THE DRV8825 PURPLE DRIVERS / WITH HEAT-SINKS ! +4 PCS OF A DRV8825 1/32 STEP . GRBL isopensource software that runs on an Arduino Uno that takes G-Code commands via Serial and turns the commands into motor signals.

My mistake. I now see the 8825 only handles 2.2 amps. I miss read the specs. But to the good at least I have two drivers for the Y axis.

@GaryOlson sounds like a fun project. We are working on an upgrade to the gshield that has 4 stepper motor drivers and can deliver 4.5amps. You can put your email in to get an alert when it’s ready to be purchased:

I have used both driver chips. The gShield chips (DRV8818) are rated for a little more current. It is unlikely you will be able to cool the chips on either board enough to get full rated current. You will probably need to keep them below 2 amps.

The DRV8818 has a much higher switching frequency than the DRV8825. We evaluated the 8825 for the Carvey and found that the motor noise was not tolerable for some people (very high pitch whine)

Thanks for the info. Yes I intend to keep the amps lower than the ‘boiling’ point of the chips. I guess the only answer to running higher current is something like the Gecko boards.

Thanks for the info Zach. I will sign up for the alert.

Yes, I’m running one that was manufactured by the designer in New Zealand. I’m running the NEMA 17 motors, so I’ve got the 8825 drivers adjusted to current limit at the rating for my motors. The board works fine. A few criticisms that you might or might not want to hear:

Thank you, I appreciate the info.

I received the NZ BRD.V3, although I have not yet fired it up. So far the gshield is testing great running Nema 23’s one on the X axis and two on the Y. I am using heat sinks and using the power supply fan to blow directly on the gshield. I haven’t checked the amps either, but will in the future when the mill is 100 percent complete.

I own several R/C Heli’s and I agree the pin connectors appear a bit light for 2.5+ amps. My heli Motor esc’s use 14 ga. wire on the load side and standard servo connectors for the signal side. It will be interesting to find out what the max amps the pins are capable of.

Oh man! +1 to interest in the shield! I’ve got a tb6600 for my Plasma Cutter CNC project, but the parallel interface is a serious PITA! If I could ditch that, and drop in a Grbl!!! Wow! That would be a SERIOUS boon for me!

@Zach_Kaplan: Any chance of seeing the Eagle (or whatever) files and BOM released for the shield given y’all are putting it out there under CC-BY-SA licensing?

OK, well I may need to go with some single axis TB6600 Gecko clones paired with Grbl then, if I want to switch over from my parallel port driven unit. Since getting my SO2 I’m REALLY liking the Grbl and Universal gCode Sender combination over Mach3 with my Parallel port driven driver… so depending on if/when the product is ever / if ever, released will determine if I’m able to keep my existing electronics package or not. My NEMA 23 motors for the CNC Plasma are 3A, 36v @ 2.3Ω, so running them off the TinyG or Uno w/stepper driver isn’t an option if I want full power out of them for rapids… but I can always drive the single axis drivers from an Uno running Grbl, and still have my USB connection rather than parallel.

THe PC in my shop with the parallel port is old and dying a slow sawdust and grinder dust infused life… and it’s just a matter of time before it finally gives up the ghost even with my trying to remember (and failing) to regularly blow it out… and it’d be a LOT easier for me if I was able to just drop a small laptop out there in it’s place and drive the whole thing from USB. I’d LIKE to replace that PC before it dies, rather than have to scramble after the fact…

It will be released. We have it working in our shop. It’s pretty cool. We are waiting on some parts right now.

Gonna drag this thread up out of the depths.

Because I can’t leave well enough alone and have to tinker with every electromechanical device I own, I picked up one of the carrier boards mentioned in the original post along with four 8825-based drivers. My impressions:

-It will be a huge pain in the butt to connect everything unless you already have a stash of DuPont connectors and contacts. Thankfully, I did.
-Bart is absolutely correct - as he mentioned above, the frequency of the 8825 chopper drivers is somewhat low, and the resulting motor whine is beyond annoying.
-Try as I might, I can get neither the automatic spindle spindle control nor the limit switches to work, and I am not new at this.
-There’s a fuse on the board. I don’t know what it’s rated at, but it blew very quickly (under almost no load) and was subsequently replaced with a plain jumper wire, because I do not fear the magic blue smoke. No problems with the actual drivers since then.

It was a $25 experiment, and it wasn’t all that successful. I’ll be reverting back to the stock gShield today. The other board might be useful in another project someday, if it’s an application that doesn’t require me to be in the same room with it while it’s running.