Just messing around with some aluminum 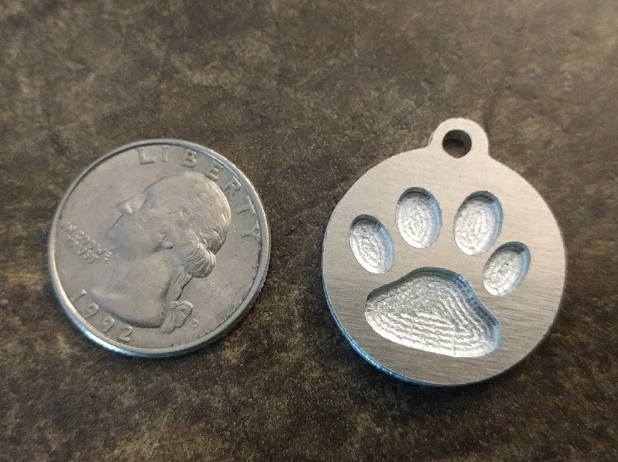 took about 15 minutes to cut, I going to fill the pockets with somthing

I really like that. Can you show us the other side of it? Anything special there … is it domed off, or anything?

I would fill it with HDPE as a test. I know you can melt it in the oven, but I don’t know how it flows. Then it could be sanded flush to have an inlay. Or lots of other choices. Just plain painting would make the thing pop also.

HDPE is a good idea…

However, HDPE Doesn’t stick to virtually anything and almost nothing sticks to it. That’s why glue bottles are made from HDPE. Something resin-based would be a better choice also since HDPE doesn’t really flow at all until you get it hot enough for the fumes to kill you.

Here is a short video of the cut in action

Hmm… would you happen to have a link to this?

You are right about HDPE being too slick to stick to anything, so I guess that was not a good idea. And thanks for letting me know that HDPE is dangerous if you get it to fume stage. I have been saving up HDPE and purchased a toaster oven, but haven’t melted any into bricks or blocks yet to mill it on the X-Carve. I will be careful, I guess.

I have melted HDPE in the oven, I lay it on parchment paper covered cookie sheet and set the oven to 350 and have not had any problems, I always run the exhaust fan and open the windows just to be safe.