Did you modify your machine at all to impact rigidity?

I haven’t. I was considering the steel plate between the X-Axis gantry. Haven’t made my mind up whether to do it or not. I was also looking into a 3d printed support someone made and uploaded to thingiverse: https://www.thingiverse.com/thing:503437. I was thinking of cutting them out of aluminum, actually.

So as promised, I made a bit of video of the machine carving today. I wanted to record in 4K but the file sizes are just absurd. 1080p60 will have to do

The focus kept going in and out for some reason. Probably the laser auto focus getting hit with chips, haha. Also still don’t have a good way to mount the camera somewhere.

Edit: If the video isn’t in 1080 give it a minute its probably still processing.

That looks pretty darn good. Also, you have the smaller machine which is much more rigid. When you say finishing pass, do you mean removing material from the bottom of your pocket to expose the wasteboard leaving your tabs or do you mean, you are taking another .015 off of the edges of the part as well?

One way to experiment with how rigidity modifications might impact your finishing pass is to cut out one trigger as close to machine zero as possible, where your router stays close to the front left brackets. And put your hold down screws through your material in holes the same size as the screw. There should be incrementally less vibration there and you could compare the results. If they are nearly the same, then the modifications might not yield good enough results to pursue.

I actually cut my stock into 3" wide strips before milling. This way I can have it run along the Y axis, so the x carriage is as close as possible to the Y. I don’t intend to be cutting 12" x 12" parts on this machine. The most I can think of for now is about 4 x 10. I took some measurements again with my square to make sure everything is squared up. X axis was leaning forward maybe .5mm, this probably contributes to the chatter.

I’ll do some more testing tonight.

is that air assist you have hooked up?

Yep! This is it: http://littlemachineshop.com/products/product_view.php?ProductID=2226

I did a few more trigger plates messing with feed rates and DOC. My machine will sometimes struggle with anything harder than .02" DOC 50ipm on a full width cut. 0.015" at 50ipm seems to be the best for roughing and .01" at 40ipm leaves the best surface finish. Lighter passes didn’t yield much improvement, so I’m gonna stick with those settings. If i wanted to try real hard to get a perfect finish, I’d probably buy a 4 or 6 flute and use it only for finishing passes at full or near full depth. Changing the tool is too much work for such a small part though, so that’s not really an option for me. I definitely like the 3 flute end mill over the 2 flute though, much less chatter. Seems a lot more stable.

Very nice work. What type of aluminum are you milling. I have been milling some 1/2 inch thick 6061 with ok results. The first time was horrible. The bit walked all over the place and made a mess mostly due to the machine not being rigid enough.

I’m milling 6061-T6, bought from onlinemetals.com. I had the same experiences as you the first few times I cut aluminum. AWFUL results with unbelievable chatter (this was with the 300w spindle).

Looks like you’re using the 1000mm version. From what I’ve heard, you can’t cut aluminum very well on such a long gantry, there’s just too much opportunity for flex.

Try out what Earwigger suggested, you might get better results:

One way to experiment with how rigidity modifications might impact your finishing pass is to cut out one trigger as close to machine zero as possible, where your router stays close to the front left brackets. And put your hold down screws through your material in holes the same size as the screw. There should be incrementally less vibration there and you could compare the results. If they are nearly the same, then the modifications might not yield good enough results to pursue.

Where did you get the flat bar steel? I’m interested in a smaller cut for the 500mm gantry.

True Value Hardware. They had a display that was mostly empty and happened to have one piece of 3/16". If they only have 36" lengths, I am sure that would work just as well - it shouldn’t have to run end to end they way it is bolted in. The 1.5" on either end are just not going to twist like it can when the entire length is free floating.

But there are plenty of metals distributors if you live in a metro area and they usually have LOTS of scrap pieces for sale. That’s where I go to get big hunks of aluminum for carving.

While, I don’t calculate speeds and feeds using an online program, 16,000 rpm sounds fast for a three flute end mill in aluminum. You might be rubbing too much. The best way I found to test different speeds and resulting chatter is to cut lines in aluminum from front to back, so the mill is being dragged toward the back of your machine and the spindle is near the middle of the x-axis. That should produce maximum chatter and give you the best indicator of the appropriate RPM for THAT bit on YOUR machine at THAT feed rate, regardless of perfect world calculations. Once you dial it in, you will get better results. Also, don’t forget to lube with a little wd-40 which really helps reduce chatter. You will see the chip size (or probably gray paste at high rpms), gradually change with changes in RPM at consistent feedrates. Try for bigger chips initially. I was able to get nice glassy sides to the aluminum I was milling on the 1000mm machine but it took lots of experimentation.

@EricDobroveanu when you are a profiling your triggers, you are actually using a “pocket” toolpath right? Folks might be trying to cut pieces out using a profile cut which leaves no wiggle room for your end mill. I learned from your work to create a pocket around the profile which reduces chatter and enhances chip removal. I don’t use Easel so I don’t know if it supports pockets v. profiles, but that trick drastically improved my ability to get a nice enough finish in thicker aluminum. That and a much more powerful spindle.

I got the 3/16 thick steel from Lowe’s. It made a very big difference in milling aluminum. I can actually put the material smack dab in the middle of the machine and it cuts fine. Just have to make shallow cuts.

when you are a profiling your triggers, you are actually using a “pocket” toolpath right? Folks might be trying to cut pieces out using a profile cut which leaves no wiggle room for your end mill. I learned from your work to create a pocket around the profile which reduces chatter and enhances chip removal. I don’t use Easel so I don’t know if it supports pockets v. profiles, but that trick drastically improved my ability to get a nice enough finish in thicker aluminum. That and a much more powerful spindle.

Yes! MeshCAM has a “machining margin” option and that specifies how wide the roughing pass is going to be. It doesn’t let you go less than the width of your bit, in the video I have a margin of .135, I think. In that video I am making 3 passes along the outer contour. The first and second passes alternate, the first to remove a slot’s worth of material, and the 2nd to expand that slot to the machining margin parameter. The 3rd pass is the final finishing pass, in the end I do two .015" finishing passes.

The chatter still exists so I’m probably gonna pick up some steel plate and also swap out the bed for an aluminum extrusion. I don’t have a ton of money to throw around so ~$100 for a full bed swap is a bit tough to swallow (extrusions, screws and nuts and material for new clamps).

Edit: Also wanted to say that having that much control over the finishing passes lets me plug in exact parameters into GWizard. I can specify the final finishing pass to have .0001 deflection (or less) to reduce chatter as much as possible.

I tried to use G Wizard and the cut parameters it gave were so far from being usable with the x-carve that I gave up on that idea. Did you change something in it to make it give more appropriate speeds and feeds?

Oh, I also move the slider over from “rough” (the bunny) to “finish” (turtle). Keep an eye on tool deflection, for a finish pass I never go over .0002 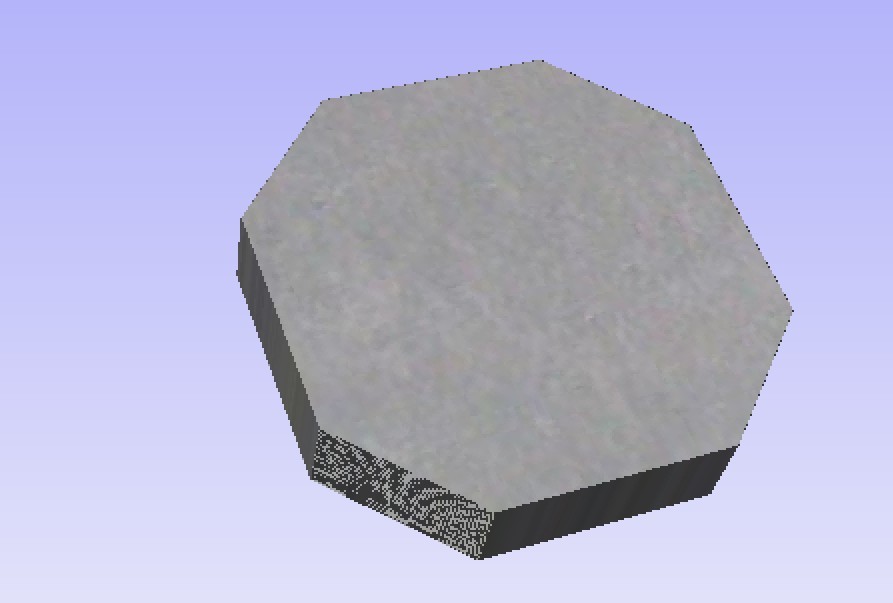 I’m open to suggested changes to make it work better.

This has all been trail and error but seems to be working ok. The finished edge isn’t perfect but some very light sanding on a bench sander and it shines right up. I do get a little bit of chatter when cutting across the x axis but while I the z direction it seems to be very happy with these settings.

Plenty of air flow to keep the groove clear and some cutting oil seems to keep the cross cuts going smooth enough. Nothing crazy like I experienced on the first attempt where I was sure that the bit would break before I could get to the emer stop button.

Sounds like its working out for you, my parts don’t come out perfect either. I take a file to them usually just to smooth it out the ridges and get rid of the tab marks. Tumbling them does a decent enough job of softening up the edges and smoothing out any non-major tool marks. Tumbling never gets rid of the chatter though.

Here is the curve of a trigger that’s been tumbled and left satin for anodizing. No sanding or filing was done on the curve of the trigger, just a rough tumble finish . You can kind of see a gouge of chatter on the left side of the part. Other than that bit of chatter that’s what it looks like after giving it 15-20 seconds on a file (and again, tumbled after). 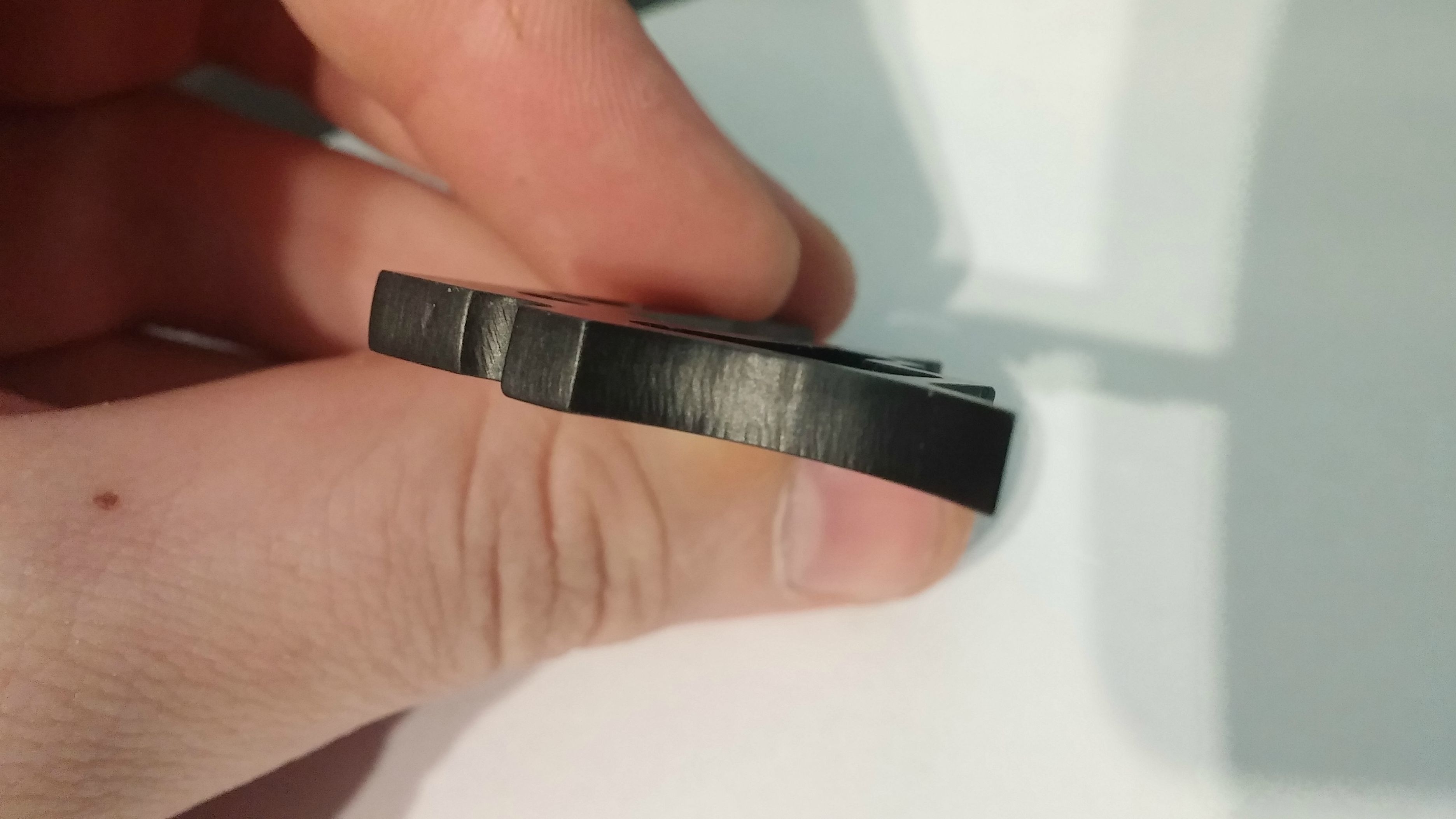