I was wondering if I’m currently using the wrong post.

Since I’m not currently able to use RhinoCAM (I’m still learning it), I make all my drawing with Rhinoceros, export them as .dxf and generate the toolpath with Vectric Aspire which a friend generously let me use from his laptop.

Anyway, as I said I generate the toolpath (2D for the moment) and of course save them with grbl.8c (mm) (*.gcode) as this is the only post available for grbl (except the imperial one)

I send the file to the machine using UGCS but I noticed that the current grbl version is something like v0.9j.

I have never update the grbl on the machine since I have it (March 2016), should I do it? And use another postprocessor for Vectric, or is ok as I’m doing? Because I can’t find any other post for Aspire and don’t want to make a mess.

I think that Aspire uses the same post processors used with Vcarve PRO/Desktop. If so, you can find the ones for the X-carve here:

Yes I casually found it and downloaded. Do you think I need to update my grbl version anyway? I don’t know what is currently installed.

When you open the COM port for your X-carve in UGCS it should show you the version number of grbl in the console window.

Nice! I’ll try in the afternoon.

Do you think at least I should update if I have a version older than the v0.9i? There’s some improvement in it?

Personally, I run version 0.9j. It is the latest stable release of grbl. I would upgrade to this version if you have an older version.

Some people are using version 1.0c which is still in development and is changing frequently.

So, correct me if I’m wrong: Using 8c as post, is better to have 8c installed too?

I guess the post made by Vectric (the one you posted too) is the latest post available (unless I’m totally confusing how post work and supposed that 8c is an older version), so update grbl should be mandatory for a correct “dialing”

Version 8c has the arc commands commented out (g-code G2 and G3).

I use grbl version 0.9j in the Arduino and the following Post Processor files for Vcarve. They are similar to the Inventables post processors, but have the T1M6 commands removed and added an M5 command.

I checked I have v0.9j installed too.

[Edit] I think I missed what you were asking in this post so I’m editing my answer.

The 8c version that is distributed by Vectric as Grbl_inch.pp and Grbl_mm.pp has the ARC functions commented out (which effectively eliminates G2 and G3 from being generated by their software).

What this means is that instead of using arcs to generate curves in your carve the Vectric software has to simulate a curve by using a lot of small straight line segments to approximate a curve. The quality of the curve in this situation is determined by the length of each straight line segment and the number of segments used to simulate the curve.

Making a lot of small line movements is harder on your machine than if you can use arcs to do your curves.

It all seem clear.

There’s some other difference between the post on the V-Carve Pro page (here on Inventables site) and the 2 you posted some comment above? Apart from T1M6 removed and M5 added which I don’t don’t what they means

Ignoring comments and version labeling, here are the significant differences.

Nice. I just cutted a piece using the post and seem to be smoother than the Vectric standard one. I need to say I used RhinoCAM instead of Aspire.

I also noticed strange things, as on a straight channel (with engraving mode) seem to have loosed steps, but the outline went perfect and centered. Never had that problem with Aspire (though it gave me offcenter pocketing problem).

Oh, sorry for the loss of question, just want to concentrate all problema in one post if I can without bother tons of people.

Here are some tips:

Woah! I just bought an electronic scale!! Glad to have had the same idea of Robert.

As I changed ALL the grain of the pulley with 3mm screw, made the V-Wheels mod, Z axis V-Wheel mod, 30 minute X axis stiffening, setted the pot, and calibrate the stepper, I guess (well better say I hope) that my problem is due to incorrect belt tension and a little dull bit.

You have made a pro guide anyway!

Have you notice if those post work with RhinoCAM? I noticed that .pp are not recognized by the plug-in so I had to download the post from MecSoft website. Do you know if those have the same improvement but just different extension?

EDIT: I imported the pp downloaded straight from MecSoft site, and while searching if I can modify the .pp extension file to use it whit RhinoCAM (that use .spm extension) I noticed that RhinoCAM itself have an option that let you choose if you want output ARC for linear segments, or spiral or helix motion. I have read that this work even if you have a post with G2 and G3 command (instead of the pp you posted which eliminate G2 and G3 command directly that RhinoCAM don’t “read”). 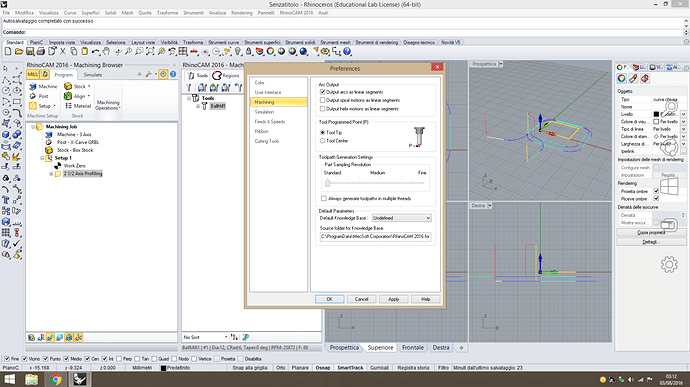 I use Rhino 5, but I don’t have RhinoCAM so I can’t help with that product.

If you want to try just tell me.