Having a workpiece clamped down on a 500 mm X-Carve will seriously constrain the effective working area due to clamping material needing a lot of X/Y space as well as rising above the workpiece. Even moreso when adding a dust-shoe that must be anticipated to not crash into clamps and their disturbing knobs. Additionally, I also experienced cases where my UGS would hit a rare bug and double the X travelling distance… further raising the need for a truly flat kind of clamping that does away with clamp-crash-planning altogether.

Which has led me to prototype the Angled Flatclamp, where the workpiece is prepared by ripping 15 degree angles on the tablesaw. Then I mount the clamps having equal or less depth of the workpiece, and a corresponding 15 degree angle, using conical head machine screws in slots that are spaced 75mm apart to fit the X-Carve screw holes.

The angles of the clamp and workpeice will help keeping the workpiece down, diminishing the lifting capacity of an upcutting bit getting stuck.

Since the angled flatclamp has large frictional contact with the workpiece it will also prevent horizontal movement to a greater degree.

So by using angled flatclamps I am now able to freely move the full X290/Y310 mm to make use of an entire workpiece held within. Without even giving clamping a single thought anymore:).

I’m in no way discounting your idea, but would like to suggest you try masking tape and super glue. It works like a charm and takes no space whatsoever from your working area. I haven’t used a mechanical clamp in ages.

I wish I felt that confident about glue… However, one absolute requirement was to leave my wasteboard intact without messing around with stuff like glue, which in turn allows me to 1. put some sheets of paper below my workpiece to spare the wasteboard on full-depth operations, and 2. compensate for any Z0 differences using smaller pieces of paper before carving.

Anyways. Glue, clamps… whatever makes each and every one of us happy and productive. Stay well!

would like to suggest you try masking tape and super glue. It works like a charm and takes no space whatsoever from your working area.

To me, glue/masking tape simply seems awesome to combine with angled flat-clamping (removing the need for making tabs to say the least).

But yet another goal of mine is to introduce my kids to carving. Hence I strive to avoid hazardous chemicals as much as possible.

Another hypothesis of mine (which I’m evaluating right now) is that an angled flatclamp might be advantageous when prototyping my brush-less dust-shoe. Brush-less for accomplishing high in/upwards airflow. The theory being that clamps leveled with the workpiece will help the dust-shoe maintain the same up-draft over the entire workpiece. Especially on the edges, where a non-clamped workpiece might change the airflow and blow chips to the sides instead of up.

After the dust-shoe is finished I’m looking forward to revisiting the glue/tape-method by firstly satisfying the important pre-condition of leveling the X-Carve wasteboard without carving. Not carving because it already is weak enough as it is to bulge downwards in the middle. I’m thinking adding layers of shellac coating…

Possibly. But remember that I’m on a 500x500mm X-carve, where space is precious and where an “adequate” dust-shoe and/or its holder cannot occupy space to the left of the router, due to crashing into the front of the frame when homing. So I had to make my own dust-shoe, and try out different theories on the go.

Now I regret even starting this thread. I was excited like a kid doing a show-and-tell. Only to find out that my experiences and conclusions are being voided one after another. -Look, I came up with a kind of clamping I never saw before! -Sorry, everyone are only using super-glue and tape now. -Hey, I’m in the process of making a dust-shoe adapted to my 500mm X-Carve needs! -No, use an adaquate one instead, we all do.

And finally: -I’d be excited to show you my Z-probe that works on the wooden wasteboard. But I’m sure it will be laughed at as well… -Use an adequate Z-probe instead.

I use cyanoacrylate on one half and accelerator on the other. Press and hold for 5 seconds and you are golden.

Holds better than just using super glue by itself too.

I’d be excited to show you my Z-probe that works on the wooden wasteboard. But I’m sure it will be laughed at as well

I don’t see anyone laughing. Your clamp is fine. New ideas and a fresh look at things is always welcome here. That’s how we learn from one another and progress is made.

Between the new medication my neurologist put me on starting Tuesday, and seeing this about the superglue and blue painters tape…I feel like Bradley Cooper on the movie Limitless lol.

Would this work for say cutting out a 24" circular monogram door hanger. I’ve used the maximum number of tabs allowed and its not enough. 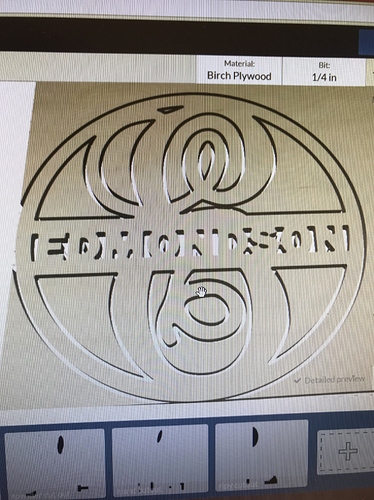 What do you need help with? 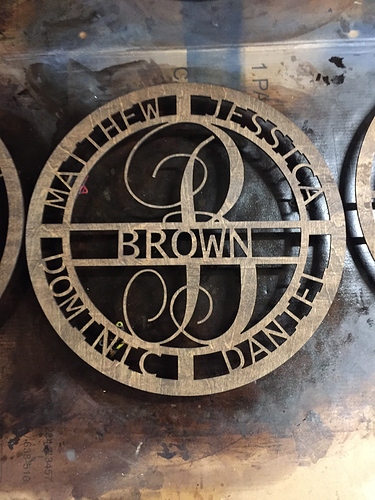 Do you use two sided tape or the superglue trick? I’m planning on trying the glue trick once all my Christmas orders are done.

More often than not, I just put a drywall screw in each corner and go to town. I’ve used the tape and superglue to hold other things though.

I like these but they have 1/2 the shear strength of tape/superglue or drywall screws. They also don’t work well with laminated boards. For me the best option is to just get a vacuum table which has none of those issues. Will use the superglue trick until then.

What type of wood did you use?

1/4" Birch Ply, I think the lumber yard designation is A4($30/sht), although I’ve used the back and the front depending on which grain pattern I like better.

I’ve used the Sande Ply from HomeDepot as well ($20/sht), but I feel that the A4 cuts cleaner and leaves me with less sanding to clean up.