Another day another issue

It seems like every day I have a new issue. I finally was ready to surface my waste board so that I could get everything nice and flat and then this happened. 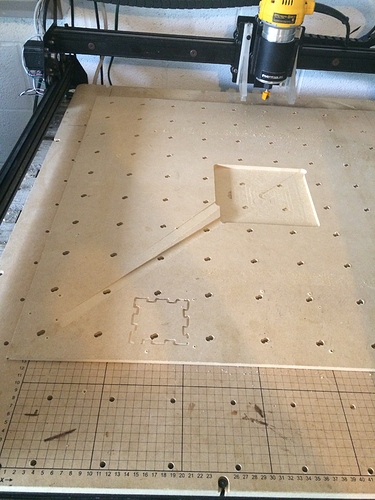 I measured all four corners they are consistent within a coupe thousandths of an inch.

I created a fill square with a cut depth of 1/16. I zeroed the bit to the corner at work x,y.z 0,0,0. It slowly went to the middle gradually going to the depth you see and the started making an ever expanding square. When I canceled the job it returned to 0,0,0 right were it started. I would think if the z was slipping it wouldn’t have returned to the same spot it would have been at a lower spot.

I’m not sure what happened but I don’t think the bit returns to “zero” when you exit a project, right? I think it returns to zero in the X and Y axis but the Z axis is at the raised spindle height. If that makes sense.

It was slightly higher like when you hit the raise bit button.

I call those wisdom stripes in my shop. Looks like you’re on a sacrificial sheet… mdf is a cheap lesson to learn with.

Yeah I don’t mind learning lessons, it’s when things like this happen and I can’t figure out the source so there’s basically nothing learn from the experience. I ran the z-axis up and down quite a few times and didn’t experience any slipping. I can’t seem to locate the microscopic Allen wrench for those pulleys so I’ll have to find/buy a new one before I 100% rule out slippage. Anyone know what size Allen wrench that pulley takes.

Just to followup I checked all of the Z pulleys and all of the little Allen screws were tightened all the way down.

Here is a copy of my file I sent to easel anyone see any problems I overlooked. 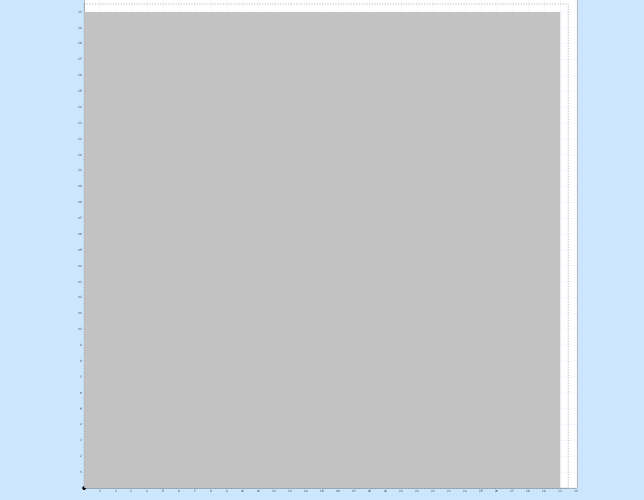 The file seems ok to me. I ran a simulation in CAMotics and it does what it should.

That’s so weird, I really don’t see any reason why I got the results I got.

Just shooting in the dark here…

Was the bit tight in the collet?

Is the set screw loose on the router shaft?

Are the 4 screws on your Z rail tight?

I’m asking because it looks like the bit dropped to the top of the work piece about 3 inches into the job. Then I’m thinking the bit started to dig itself in as the X and Y was still moving to the start of the cut. By then the bit was already biting into the workpiece pretty good. Then the bit held its height to cut out the square. When you stopped the job, the bit had already slipped down so as it moved back towards zero it road back up the work piece.

Otherwise, I’m with the others on the Z belt slippage. Sometimes this can be caused by tight V wheels on the Z rail even if the pully set screws are tight.

So I decided to do a second cut, I figured wasteboard is already messed up might as well get it right before I put my new one down. I I think that part of the problem is that initial waste board was not flat already I think that’s what gave it the appearance of taking so much off.

However when I ran the second program it still took off way more in one bite that shit off I have my depth per cut at .02 and in the initial cut it dropped .06. Checked my calibrations for my Z axis seems to be cutting as intended to go 1in and it went .998in.

Not sure why in one example it is dropping almost 3 times what I intended. But when I do a basic test it’s almost 100%. 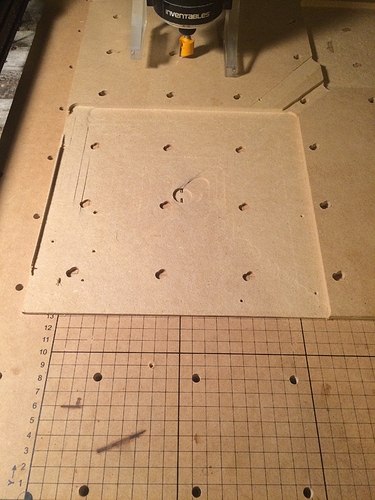 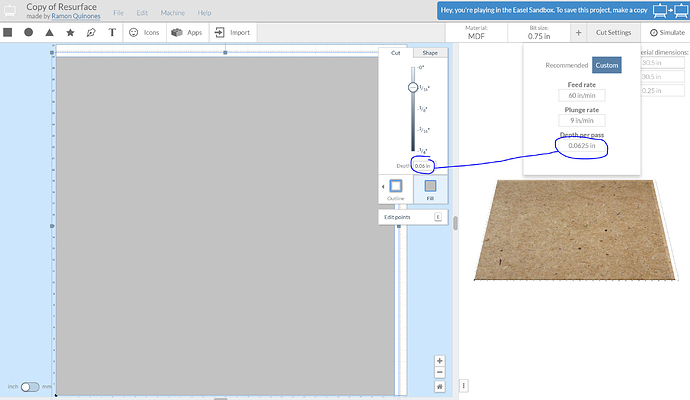 Yeah I created a new project so everything was default settings except I increased it to 60ipm.

If you look at the image you can see I killed it right as it started its second pass. I didn’t won’t it to carve into my investable waste board.

I have a new piece of MDF, I think I’m just gonna start a new project and see what it does. I still don’t understand why it’s lowering so far when I’m only telling it to go a 16th of an inch.

Just to clarify I am using one of Charles triquetra blocks through ugs to find my zero. And I used the step calibration spread sheet he provides to fine tune my steps per mm.

These images seem to show, to me atleast, that the Z-axis dropped - perhaps loosing steps? 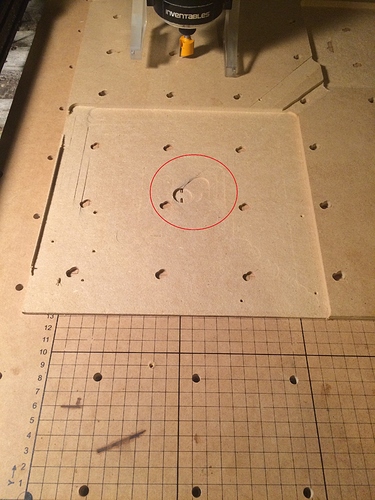 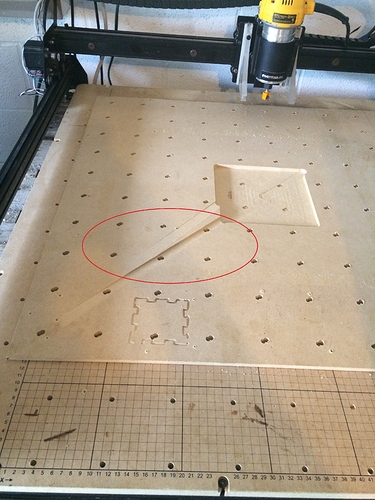 So I think I might’ve figured out the problem. I think between my dust boot creating suction on the material and the material being so thin I think it actually flexed and pulled it up into the bit I had it secured but only with two screws at opposite corners.

This morning I tried another sample square but this time in three-quarter inch MDF and screwed it in at all four corners it seem like it actually did what I was supposed to.

God that’s frustrating, it’s the simple things you overlook that always seem to cause a problem.

Does anyone else seem like that could be feasible.

To me, that looks like the ramp down to the start point like he doesn’t understand that you zero on top of the work piece, not the waste board.

All the respect you guys, but I can see over 3 mm deeper cut on it. Vacuum, down-cut, up-cut doesn’t cause that.
Loose bit Colette, Low stepper current, Step calibration, even slipping pulley might be the blame.
If that MDF is a little warped, it goes just say 1 mm down. Something mechanically wrong. 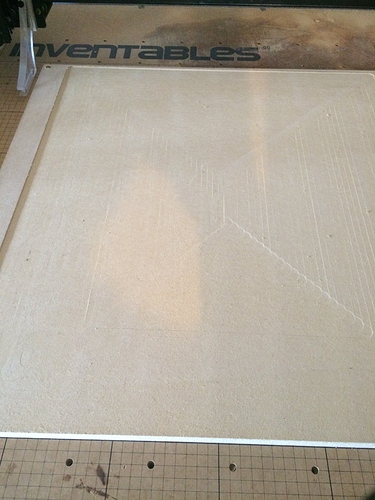 Based on the results I have noticed two things the front right corner is between a 1/32-1/16 lower than the front left corner. Since I am observing faint lines on the surface I am pretty sure the z is not exactly 90 degrees to the table. I tried to get it as close as I could using the two eccentric nuts that connect the router to the z plate but I think I must still be a little off. All and all I think it came out pretty good with the 3/4 bit all in one pass at 60 ipm.