Another free project for Vectric users

I found another free file for Vectric users. There are STL, crv3d and 3Dclip versions 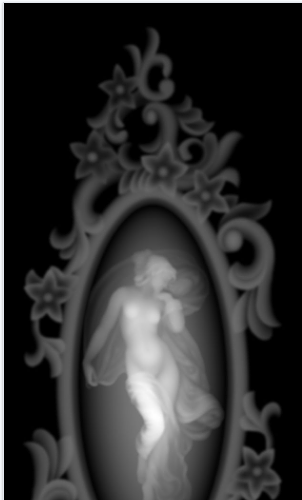 Thanks, I have been looking for art like this.

Go into Google images and search for 3d grayscale images. There are zillion of them. Some free, some if you don’t mind “borrowing.”

The .3DClip file is an aspire clipart file.

Majority of those grayscale images in GuyKass’s link are Depth Maps like the one Allen posted. There no good for 2D laser engraving, but work very good for 3D laser engraving, or cutting a spindle relief with an image to gcode program like our PicEngrave Pro 5.

There are free reliefs in different formats that can be downloaded from here too.

Carving images like this takes a while. And with that much detail it’s a lot of work smoothing it all out. I’ve done a lot of carving with a lot of detail and it’s a lot of work. It’s worth it if you need that one really nice project though.

But if you turn them into g-code using aspire you will also have to sand it down after carving which is a lot of work. And nobody will pay the price that you would want for all the time spent.

I usually carve stuff with a step over of 5 passes per 1/16 inch. Pencil shaped bit to get good detail.

Yes, tighter step over is the way to reduce machining marks.

Wow. That’s tight. I’ll have to try that.

I’m with @PhilJohnson . A smaller step over at 120ipm very little if any sanding. A quick once over with a dremal and sanding wheel is all I’ve ever had to do.

What does 120 ipm mean during a 3D finish pass? Nothing is moving anywhere near 120 ipm.

If your acceleration setting is set to the standard 50 mm/sec^2 then it would take about a full second to reach 120 ipm. But the Z axis is moving at least once per mm of travel and the X/Y positioning must stop and wait on the Z so optimistically you may be moving at 12 to 15 ipm.

If you match your plunge rate your z will also move that fast. I have yet to do a 3D module that has 90deg corners. The Z always moves in conjunction with the X and Y. So I don’t understand why your X-Y travel is stopping to allow your Z to move up and down. Maybe I’m just confused.

Why do 90 deg corners make any difference? You may be talking about cornering algorithms that will slow the machine to allow it to turn without exceeding max accelerations (a very tricky problem)

While cornering will slow the speed, that is not what I am talking about.

If you are doing a spiral or offset pattern, then the spindle direction is constantly changing which can also lower feedrates. But even if you are doing a raster pattern where X or Y is not changing except at edges, the Z axis is in near constant motion. The Z axis is also the slowest axis on the machine, so the X/Y cannot proceed until the Z axis reaches the next step.

I also just noticed that GRBL 1.1 has been released that includes support for lasers! Plus lots of other new features.

Phil there are two acceleration issues.

It is not possible to go from zero to a non zero speed instantly in the real world.

(Unless you have added the very expensive inertial damper option)

My point wasn’t for a 90 deg corner in the X Y movement. But a 90 deg corner in the Z movement. The only time the X Y would have to come to a complete stop to wait for the Z is if it was drilling a hole / or making a 90 deg movement relative to its last position. But as I have stated in many other posts of the same discussion. This theory remains the case whatever your max ipm is set at. So according to your calculations of never exceeding 12 ipm set at 120. If your set at 60 you’ll never exceed 6ipm. Still twice as fast. Please don’t take me the wrong way. I have compleat respect for you and your knowledge. I guess I’m not understanding your point. Any way you cut it. 120ipm is twice as fast as 60ipm. Or am I wrong there?

The flat sections do not need a 3D detail pass.

Then the section is not flat is it.