Any plans for a Drag Knife option?

The stock spindle has virtually no resistance to turning.

Oh perfect! That make my design so much easier, less parts! Thanks for the response.

Drag knife is OK on vinyl and paper but material can be a real pain as it pulls rather than cuts. I would look at a solid state laser diode for cutting thin cloth/sheet material, but NOT vinyl as it produces some nasty fumes. Check out some of the KickStarter laser projects for the types of diodes used. looking forward to seeing an X Carve in the UK.

You can use the comercial blade holders i.e Mutoh, Roland etc. I use one in an alloy block that fits in the fitting for my router spindle.

I was actually just thinking the same thing, why re-invent the wheel when they’re readily available already? Not as good as commercial gear, but for someone who’s planning to just do some occasional cutting of thin materials? Why not!

I’m starting with something very simple, just to see how close it comes to working. If not, I’ll look at adding some vertical compliance. 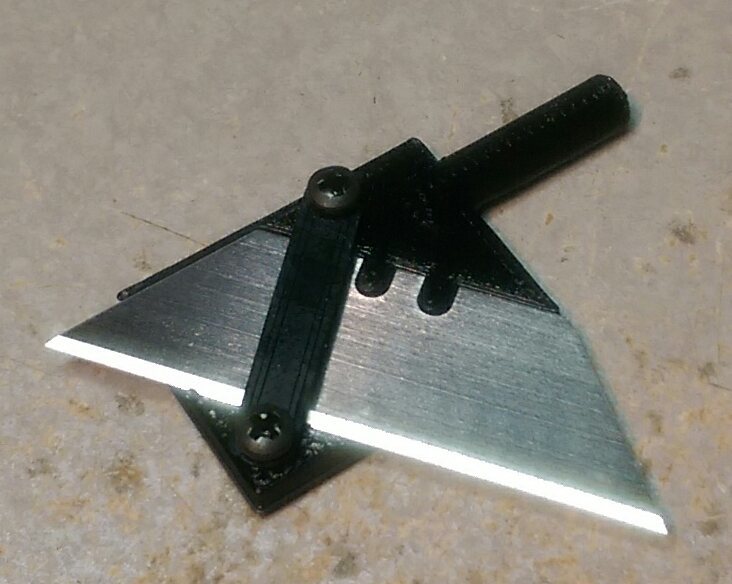 I redesigned it to include some bearings, and it was better. It seems like this needs special CAM, or knife-specific geometry from the start. 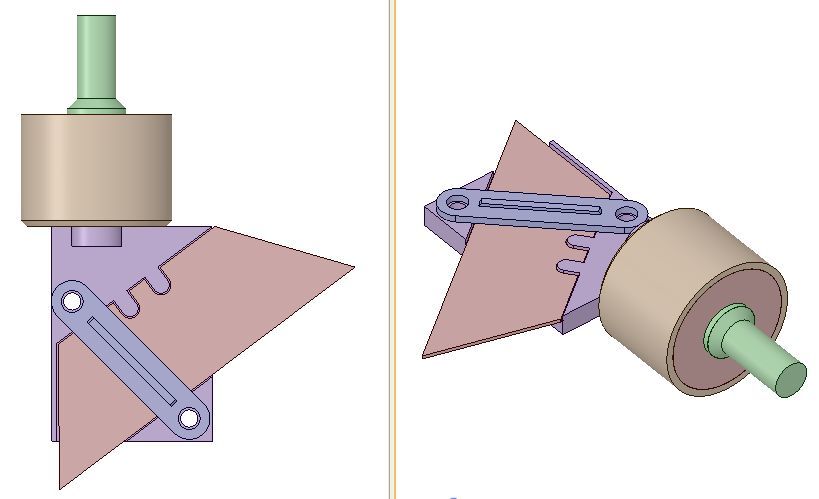 Did you just use Easel to generate your tool paths?

That might have been one of the issues with your first iteration not working. From what I’ve read when using a drag knife “corner swivel” should be added to the g-code so the blade will be oriented in the correct direction.

Looks great! I’ll have to get on making mine!

Also when looking at drag knife designs the knife blade tip appears to be more towards the centre of the pivot point. Most have the actual blade tip directly below the main bearing in the center. From your design I think you’d have better luck pushing the blade back more to make it easier for it to turn.

Yeah, the blade tip on commercial units is usually within a few thou of centre of rotation. On my Roland vinyl cutter it actually has a switch to choose the tip offset position for light and heavy cut blades. This in effect adds overrun and loop back into tight radius corners.

You also have a very large distance (moment) between the blade point and rotating bearing. Your first blade holder will certainly allow the blade to flex during use, especially if its unsprung i.e the blade can’t rise and fall under spring or magnetic tension. Again on commercial cutters you dial in the blade weight for cuts.

I wonder if an improved design could involve using a Dremel to cut a strip off the blade at the angle you have it and mount within the bearing you use for rotation ?

If the blade is on center, it won’t caster.

I quite agree Tony, but it only needs a few thou of trail, not mm’s. Thats one reason the blades are so expensive and tiny, they are very precisely ground, usually in carbide. Your blade pushes quite a bit of air as comes through a tight bend, watching that video.

This is what I was looking at before…

Edit: I just watched their Getting-Started video, and the s/w they were using adds radii to each corner (outside). I’m going to do a quick test, but unless I can find a plug-in to do this in Inkscape, I’m tossing the idea.

1.6mm card is quite a tall order. It puts a very high load and bending force on the tip. I guess blades are cheap.

Though at that price I would be looking to retro fit a laser diode for paper craft.

Well, looks like Easel is outsmarting me on this test…

We have a small section on these on the Shapeoko wiki:

Basic idea is to add a special “Carve” wizard for each which would have special features specific to their needs. I think most could be dealt with via gcode post-processing.

Where can I buy this products?

The Donek Tools Drag Knife can be used to cut almost anything you would cut with a utility knife, but with the speed and precision of a CNC router.