Any Vector Artists that can help me?

Hi,
I’m looking to vcarve an image of a locomotive into a piece of hardwood for the lid of a wooden pencil case and am struggling to be able to either find or make something suitable.

I’ve tried importing an image into VCarve and tracing it, and I’ve also tried tracing the same image in Adobe Illustrator, however the results I’m getting are terrible.

I’m not looking for a large amount of detail as the image will be less than 12" long, however I’m ready to give up as getting something usable is way harder than I’d have thought.All i’m trying to achieve is an image that is recognisable and detailed enough to look good when it’s stained darker than the surrounding wood.

Anyone have any ideas or suggestions? An example of what I’m using would be something similar to this:

Wow! That’s a lot of detail to fit into a 12" lid. You’re probably going to get the canned answer of importing this into Inkscape and tracing the outline ala SeanKeplinger’s awesome gun project. However, that may be the best answer. That way, you can carve as little or as much detail as possible to fit withing the scale of your project. Good luck and keep us posted!

Have you tried dithering the image first before trying to trace it?

This would be real easy to do on hardwood with a laser considering all the fine lines in the image.

V-Carve quick engrave option going into fine details nicely. You can see T symbol on tool path window. I use 30 degree engraving bit with shallow dept 50 ipm, 30 plunge and .2 safety clearence (because it will go up and down constantly), and have very good result. I haven’t try anything similar to this, but I’ve done many detailed decors with success.

@picengravertoo Thanks, your image looks pretty good in my browser. Will try it asap in VCarve. I’ll need to do a Google search for “dithering” - I have the suite of Adobe CC tools as I’m also a camera dweeb, but I’d always thought that dithering was what I did when faced with two or more decisions. Learn a little every day…

@ShaneBell Image looks nice & clean, thanks. I’ll try this one too.

@AlanDavis - Thanks, I’ve never tried V-Carve quick engraving, but I did just recently buy a spring-loaded engraving tool with several fine bits. This may be a great project to test them. The little fine detail work I’ve done has also shown the need for a really small safety clearance - I did one where the clearance was 0.5" and the machine spent more time moving up & down the Z axis than it di actually cutting.

Will try these as soon as I’m on days-off and finished nightshift. Will post successes & failures…

I used the Threshold Dithering Algorithm in our PicEdit Lite image editor, which converts it to a 1bit B&W bmp. It may trace better that way without the extra colors that was in the original image.

Also, from looking on the site where that image came from, looks like the guy is pretty nice. So could maybe contact him and see if he can send you a vector version of the drawing.

Or if it doesn’t have to be specifically that model of locomotive, there are a number of vector options out there that may work for you.

Here’s one option I found in a quick search.
Here’s the link to download 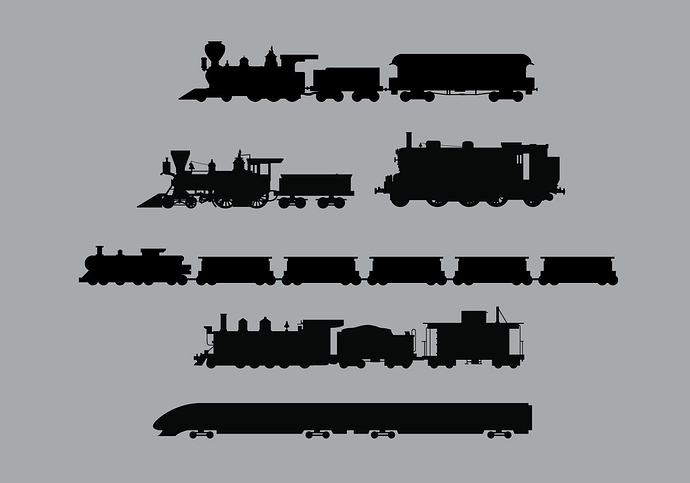 @picengravertoo @ShaneBell Thanks for the modified images, whilst they’re ‘cleaner’ than the original, the best Vector conversion I can get in VCarve Pro is shown below. As you can see, pretty much each pixel has been imported as a separate vector.

Whilst I was able to carve a moderately successful trial in MDF using VCarve’s Quick Engrave as @AlanDavis suggested, the tool has to basically cut each pixel/vector individually which both wastes a lot of machine time and destroys much of the detail.

@michaywood - As you suggested, I’ve emailed the owner of the drawing to see if I can get some DWG/DXF or vector versions however I’m yet to recieve a response.

I’ve also tried tracing the image in Adobe Illustrator (I have the Adobe CC subscription), however this wasn’t any more successful than what I got in VCarve (mind you, this the first time I’ve opened AI so I’ve no doubt I’m not doing it correctly).

Whilst I could go through the image in VCarve and edit the vectors, (I’ve actually begun doing this a couple of times), there are several thousand of them and the job would take several hours to complete. 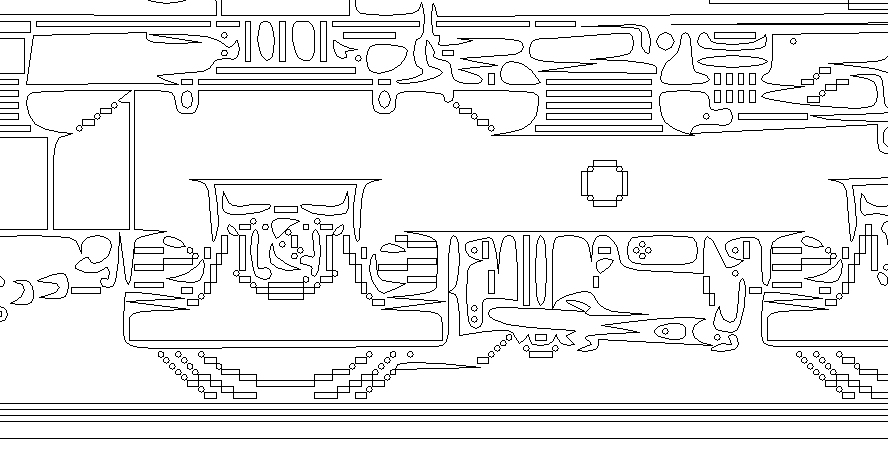 attached is a quick trace I did in Illustrator (SVG file). Best I could do to retain detail and vectorize the piece without tracing every single line. should be able to right click and save .svg

@michaywood thanks, your version is much better, however I’m resigned to the fact that I’ll need to either:

Sign of the times I guess. Im trying to do something, yet I’m expecting to find a solution where someone else has done all the work for me.

Buy a machine someone else designed. Download artwork someone else produced. Convert it to GCode using yet another tool made by someone else. When the cutting is complete, I proudly show everyone “my” work.

I did this without any complex vector restraints using our PicEngrave Pro 5 to generate the gcode with a Dithered B&W image & our EmBlaser Laser diode engraver on white cardboard. You could raster spindle engrave it in wood the same way with a fine point engraving bit. 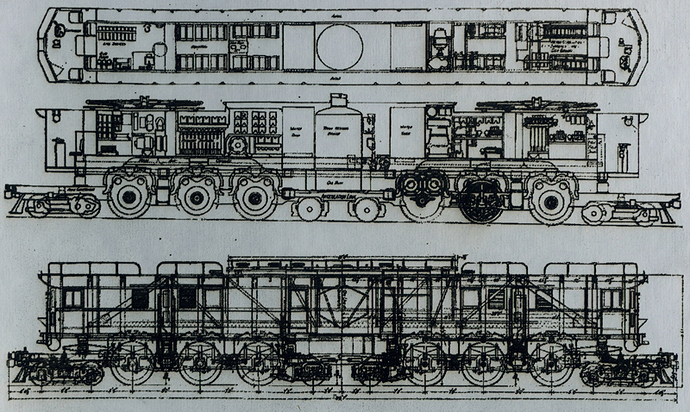 Engraving was My suggestion as well, but I don’t know how come details destroyed. Looks like David picked fill option on engraving. I could’t say anything after he said destroyed.
Besides, plunge clearence can decreased not to loose machining time. If plunge clearence and safety clearence are same like .5", of course takes long time.

Alan, I have not tried spindle engraving with line art before, but I think it’s doable with the right bit. I may give it a try with a 1/32" BEM and see how it turns out. Good idea!

Our PicEngrave has a Feed Rate Change feature that will retract the tool and run fast in white areas and slow to plunge/cut/burn in black areas. It also has Skip White Background so it will ignore the outer white areas to optimise the toolpath and reduce the engraving time. I used both of these features in the laser engraving.

@picengravertoo As soon as I get some days off, I’ll be trialling your suggested software. Looks pretty good.

@AlanDavis - I probably didn’t explain terribly well what I did. I did an engraving as you suggested which by & large was really quite impressive. However because each pixel was pretty much engraved separately, and I guess because I was using a scrap piece of MDF, the many many lines that were very close together meant that much of the detail around the bogies and areas of greater detail broke away and ended up as gaps. I used a fine engraving bit in a spring loaded carrier which worked exceptionally well. If I did the same job on brall or aluminium, I thing it would look pretty good. If I can get vectors that are not pixellated (as in my example above), I’m pretty much good to go. Your suggestion to use Quick Engrave was exactly what I needed - I’d forgoten the option was there and was trying to V Carve it.

Please don’t miss understand, I just feel sorry messing up your project. But as you say, harder the material, better the result if we’re talking about engraving. Name tells. Any carve able metal surface like copper, aluminum is the winner.
Besides your vectors were total mess. Glad you found way to clean it. Can’t wait to see the result.

12" box top? Considered doing it as a copper engraving and then attach copper to box lid? If you have a sprung engraver it should work well.

Patina the copper to really make the detail stand out.

This was a quick test on 1/8" Birch Ply using a fine point 60 degree V-bit. I resized the original image to engrave 11.5" wide and 2.93" tall and Dithered it B&W. I used a .01" Pixel Resolution (step over & step ahead) and engraved at a 45 degree angle. The Skip White Bkgnd. was used to optimize the toolpath.

Here is the optimized toolpath viewed in Mach3.

This is what it looked like after staining and a light sanding afterwards.

It took 1:05:29 min total time to engrave. This was a first try and improvements surly can be made.

Deleted 80% of the original & redrew some vaguely correctly shaped bits. Then did a “quick engrave” job on brass to see what it looked like.

Reasonably happy with it. I think a couple of hours and a few glasses of wine in front of VCarve and I’ll have useful result 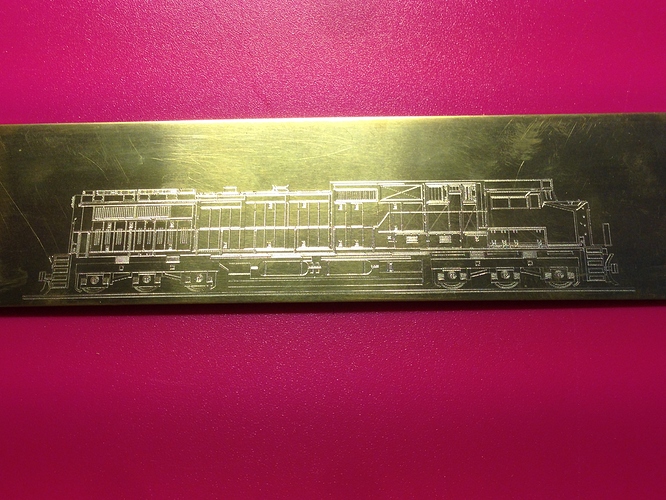