Anyone else burned out their router yet?

My Bosch colt finally gave up

I can’t be sure exactly how many hours it had been spinning - probably at least 100 hours. Anyone have any insight if that is good/bad/sufficient for a modern small router? I can’t believe these small handhelds were meant to spin for many hours at a time.

This brought up a possible feature addition to easel I think I will post over there - how about a “router on total timer”.

Well, at least I’ve got some projects done to show for it, and my first “craft sale” on the weekend to hopefully cover the cost.

Off to buy another router … 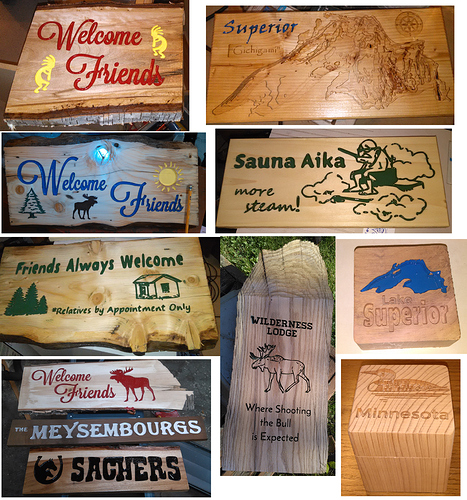 Are you able to check if it was just the brushes that wore out? I’m not familiar with the Bosch. are they user replaceable?

Ya, it’s got to be brushes. Because Bosh is single speed. Runs full speed.

A Colt can be either a variable or single speed, there are two types. Contact cpotools.com. They will have whatever spares you need, they even had a small piece for the shoe of my 15yr old jigsaw when I needed it !

Paul, I have used up a Bosch Colt as well. I’ve had it about 5 years though and I think it’s just a short in the power cord. I’m going to disassemble it soon. By the way, I live in Northern WI and love your MN carvings and Lake Superior.

Nope, mine is still running strong. I’m starting to worry a little about the lower bearing, I’d SWEAR I have just a tad more vibration now than I did when I started using it, but it’s still running well.

Paul,
Greetings from the Headwaters! Love your signs!

I have heard the 100 hour mark in regards to the colt as well. That’s alot of turns for a universal motor.

Did you let the smoke out of it or did it just stop? Smoke would point to the windings (Unit is shot.)

A failure to start could point to brushes (possibly repairable)

A squealing/grinding noise would be indicative of bearings going away, and may or not be repairable.

Also, consider that repairs may exceed the original cost of the thing. This may be considerably less if you can carry out the repairs yourself.

Another Minnesotan! I am sure your Colt is fixable. I have WAY more than 200 hrs on my Hitachi and am still on my first set of brushes.

Hakkapeliitta! *assuming due to your location and works that you have some Fin heritage.

My 611 does not even have 10hrs on it yet and its running great, But how do you know when they start to fail? Do they just quit or are there signs?

I burned out a 611 last week. It started popping and sparking and after I shut it down would not start. I ordered a 4 pack of brushes that arrived today from amazon. The seller was Buckeye Tool and Supply.

I’m a transplant in Georgia from Pengilly, Minnesota!

Doesn’t it seem like everyone in Georgia is not from Georgia?

Everyone saying something, Paul just disappeared.

Hey. Thanks for all the replies! The motor doesn’t start. I will take it apart to diagnose but I did pick up another on the way from work. The new one is carving right now, so I didn’t lose much time. That link above from Andy4us has reman. colts for about $75. I may just order one of those also for a backup.

DanBrown - It really seems this new one does run “smoother” or even quieter but it may just be my imagination or wishful thinking.

Thanks again for the feedback.

Brushes are just going to be a consumable. These little routers are not made to run like this.

Hey Paul, glad you’re back on track again. Just a curiosity, Is your Bosh Cold was variable or single speed.

I really like Bosch stuff, and I have a few refurb items from cpotools. Apart from a “R” burnt into the handle, for the ones I’ve bought, I’ve been unable to tell the difference form new. All of them have worked as good as new ones.

I think factory refurbed tools may actually be better than the mainline units since special attention is given to an individual tool to make sure it meets mfgr specs.

Mine was the single speed. I replaced it with another single speed (only type available locally) and I also ordered a variable refurb. from that link above.

Doesn’t it seem like everyone in Georgia is not from Georgia?

Seems? I have been in Georgia since 2006. But, I’m a native Texan and have retained my Texas citizenship throughout moves to Florida and now Georgia.