Anyone else seeing their GT3 belts do this

I’ve noticed that on my 2 Y axis belts there is a spot that looks like the picture below. It’s 13" from the front on the right side and 16" on the left, I’ve not really done anything aggressive nor far enough back on the Y axis yet (that I’m aware of) for this to have been caused by the pulley skipping.

Anyone else seen this on their GT3 belts? 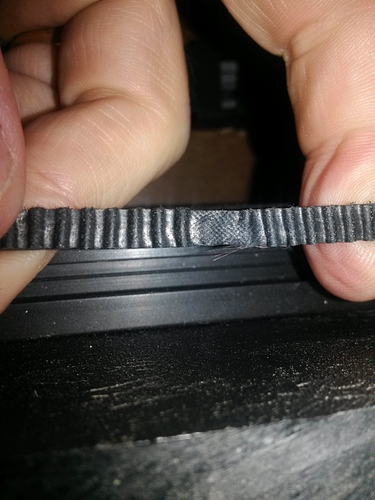 It looks like the spindle got bound up and the pulley kept turning and ate the belt. At least you know the pulley was on the shaft tightly and the belt was properly tensioned.

Weird, because I watch the machine like a hawk when I’m cutting and I’ve never seen nor heard any changes in the behavior…

Guess I’ll change the belts and watch it closer

I had the belt get caught by the edge of the smooth idler once ad it looked just like that. I had made some adjustments prior to that happening and my belt was too loose and got caught. 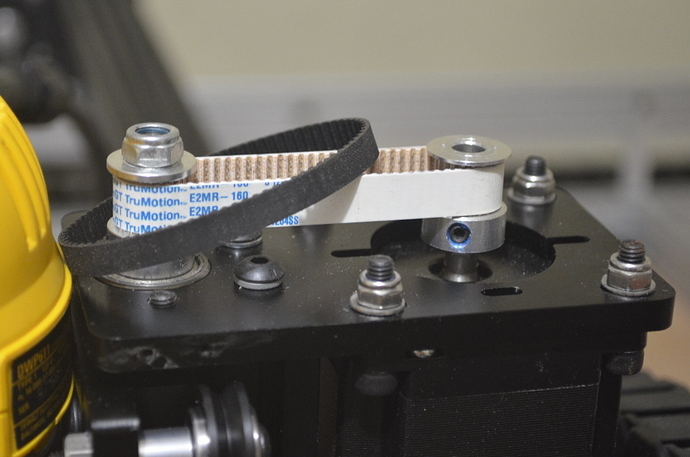 Will that belt directly replace the stock one with no changes? If so where did you get it?

Interested to see where you got the Z axis belt as well. I replaced my X and Y pulleys and belts with 6mm GT3 from openbuilds parts store.

Its still 6mm so the smooth idlers and clips at the ends stay the same.

Darryl bet me to it.
Looks like the “3M” series is the same as the GT3; they also have steel cord re-enforced GT3.
They have numerous widths available; just make sure your pulleys can handle the width.

That pulley also says it has no set screws, in addition to a pilot bore, so you’d also have to drill and tap set screws…

I think I’ll stick with the 6mm GT3 pulleys from OpenBuilds, but I may try their steel-reinforced belts next time, as long as they’re 6mm.

It looks like we need a 60 tooth belt, but I can only see this which is a 58 toothed belt.

Replacing the Z closed loop belt with a different pitch belt can be tricky, due to:

It looks like there is 4.9mm adjustment in the NEMA23 motor mounting holes, but I don’t know if that would allow sufficient movement to compensate for the different belt.

This was my hope initially when I saw the 4 slots on the Z plate, but it is the circular pocket that the motor’s circular protrusion fits that restricts adjustment to something just over a hair.

the size of the pulleys (diameter/teeth) don’t matter, so long as they are the same

Actually, the diameter matters as it changes the two pi*r parts (red) below. 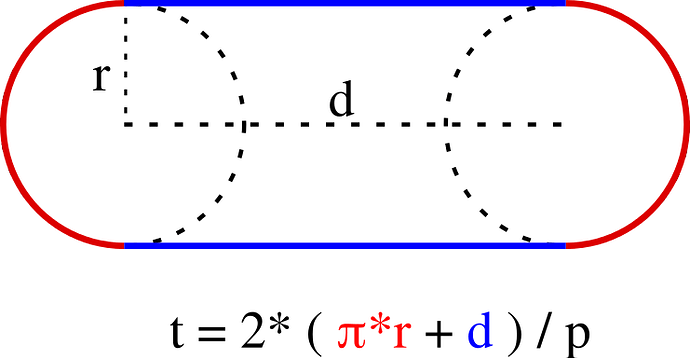 t: teeth total
r: radius (not the outer, the one where the belt sits)
d: center to center distance
p: belt pitch

If you go with different size (i.e. teeth #) pulleys, it gets more complicated. I started drawing that as well and after the first arctan, I thought to google for it… and indeed I did not need to reinvent the wheel. There’s plenty of calculators out there.

This one has a nice visual too. Just divide your belt length with the pitch in the end (3mm in our case).

After looking at the Z plate CAD, you are right about the 4mm range of adjustment. The pocket where the circular top of the motor sits is 38.5mm dia, and NEMA23’s top circular protrusion is 38.1mm dia. So there is indeed 4mm of forgiveness. All you need for the exercise now is the “belt diameter” of the GT3 pulley.

After finding a calculator specific for the kind of belting we are dealing with which already knows the pitch diameters in question, it’s pretty easy to pick a belt.

They just corrected it 1h ago, after I asked on their forum which of the two is correct.

It’s the appropriately sized belt that I can’t find anywhere.

Glad to help. Btw, I follow your build on the other thread. Good luck!