Anyone Know Anything About Aerospace Aluminum?

This is probably a longshot, but here goes.

I bought various pieces of aluminium unseen, that were from a closed business for some future projects.
One of the pieces is a big chunk of stuff that said it was ultrasonically inspected, which I thought sounded rather fancy. I looked for some info online and it is some kind of aerospace aluminium, although info seems pretty sparce.

I wondered if anyone on here in the know has any input on the value of this, as I may just sell it if it’s worth something, and also what it would normally be used for?

Thanks for any input 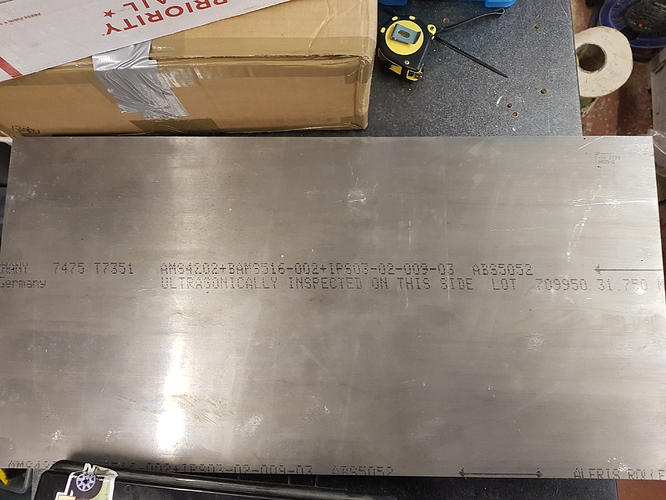 Not sure about value, but most blocks are sold per weight units, and price vary depending on grade/temper.

Thanks for that. I’m going to have a look into how it machines, and will probably keep it if my machine should be able to handle cutting it

Aluminum alloys are identified by the metals used in them, in 4 digit series, see: https://www.shapeoko.com/wiki/index.php/Materials#Aluminium for a list.

My inclination would be to use it to make a threaded table / fixture for my machine.

Now there’s an idea.
I can’t believe that had not crossed my mind, when I’m in the process of making a couple of MDF threaded fixtures. Thanks for the suggestion

So yeah, ‘spacegrade’ is just the marketing boys throwing fancy terms at you. You’re not sitting on a pile of gold, sorry mate

, but as a machinist I would be happy to sit on that stock of alu as well.

Hmmm. Decisions decisions. I have all of the aluminium I need for future stuff, and anything near that value would buy a good bit of lumber and some endmills

Yeah but keep in mind no one is going to pay full retail for it too.
In Europe that volume of alu would be quoted at about half of what Phil said.

When I bought my lathe second hand, the guy also threw in this:

I also considered selling it at the time, but in the end I decided to keep it. It’ll see some use eventually.

I actually work for a large national aluminum distributor- and a comparable piece of 7075 would sell for about $165 from us.

Aluminum such as this is generally useless to a manufacturer who requires something of the nature, without mill test certificates. And would not likely be bought second hand.

This is also probably going to be on the hard side for machining with an Xcarve. I would recommend a 6061 or softer. Depending on your application.

Yeah I’d given up on machining it myself to be honest. I’m going to borrow some time on my cousin’s mill and make a threaded table/fixture plate.

Not sure if you do any blade making, but I use 7075 for plate quenching my knives when they come out of the kiln, and as everyone else has pointed out, that plate is pricey…

I’ve always wanted to make a knife to be honest, but ive never got round to it. Also the laws in the UK are so stupid regarding blades…
I’ve not heard of plate quenching though so I’ll look it up

If you have questions hit me up, I’ve been blacksmithing for almost 30 years and making blades for 20+ of those. I used to oil quench blades (still use oil for any non-flat pieces) but I switched to plate 5+ years ago as it reduces mess, flare ups, and is safer to do in a small shop. I also switched from heating the blades in a forge to using a kiln so I can precisely control the temps for hardening, annealing and tempering. There’s a ton of videos on youtube, but ask if you have questions.