Arduino Uno - Another Probe Port? (Not A5)

Hi guys, a bit of wire broke off in the A5 slot so now I can’t use it to probe any more.

Is there another slot I can use on the Arduino Uno for probing?

Do I even want to use another slot for probing now that copper is stuck in the A5 slot?

Do I need to get another Arduino Uno? If so, is there an upgraded version or another board that’s even better somehow since I have to get a new board anyway?

Live and learn. Thanks for your help.

I’m not sure there’s another open pin. If there was, Itd be possible but you’d have to custom compile GRBL.

The uno is relatively cheap and it’s the only board that GRBL supports.

@Jason As @JustinBusby said, you can change the pin assignment in the grbl firmware. If you’ve flashed the firmware before, it’s really easy. You’d just have to swap for a pin you don’t use in the CPU_MAP. A0-A4

Attach a photo of the issue

This is the little bugger… 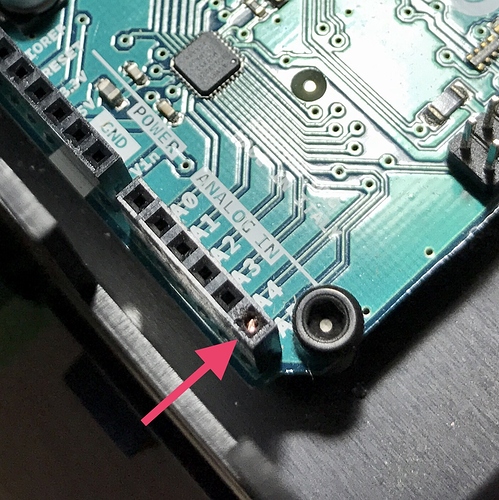 Use a soldering iron with rosin core solder. Heat the top of the pin and apply a little solder.

Use a piece of wire about the same size as the wire in the connector and tin the end of it with solder.

Melt the solder on the wire in a position close to the bad pin. With the wire hot, press it down on the broken piece in the connector and hold it as still as you can for 10 to 15 seconds. Let it cool a little more.
If you are steady with your hands, after tinning both pieces you can actually hold the wire piece in contact with the bad piece and heat up both at the same time. Remove the iron without letting the wire slip and let it cool.

Gently apply pressure to see if you can get the bad piece to slide out.

You might have to try this several times to get it to work.

Don’t be too concerned if you damage the upper 1/16 inch of the plastic when doing this.

@Jason I think there are several solutions depending on where your comfort lies. If you are making the probe connection permanent and you feel comfortable with a soldering iron, you could just use some diagonal cutters and cut the A5 housing and solder directly to the exposed connector. In my experience, that whole 6p housing (just the plastic) can be removed and replaced without much effort. I don’t know that I’d recommend that for making connections for a cnc machine, though. You could also just get one of these.

That sucks.
If it was me I would try to dig the pin out probably with a couple of picks.
And of that didn’t work replace the header.

You can use the superglue trick too.
Just have to make sure you use a tiny amount.

What you do is take a round piece of plastic not much larger than the pin. Create a cavity in it about 1mm deep and put a tiny drop of super glue in there and then place it on the pin. If done correctly it should pull out.
You may have to loosen the pin using a needle first so its easy to pull out.

Just a trick I used once one such an occasion.
Soldering will melt the header plastic unless you have mad soldering skills…

So the A5 slot is only reading 0.36 volts. I just ordered a new Arduino Uno.

Can you guys show how you connected a probe to the A5 slot? I don’t want to bugger it up again. Thanks.

A screw shield won’t fit… the wire itself barely fits. It’s a tight spot. The X axis wires are coming out of the gShield right above the A5 slot in the Arduino.

I may be able to modify the gShield housing though… cut the X axis notch out a bit more so that there’s better access to the Arduino.

I did try to solder it, and I did get a strong hold but my soldering iron was so hot that it melted the plastic around the slot… a bit more than 1/16 in.

Good idea though. Totally my fault on the execution.

I ended up doing what you suggested after trying to use solder to pull the bit of wire out. I thought I had it but then when testing the voltage it only read 0.36.

It doesn’t look good but it holds strong… I’m just not getting the juice I need out of it. 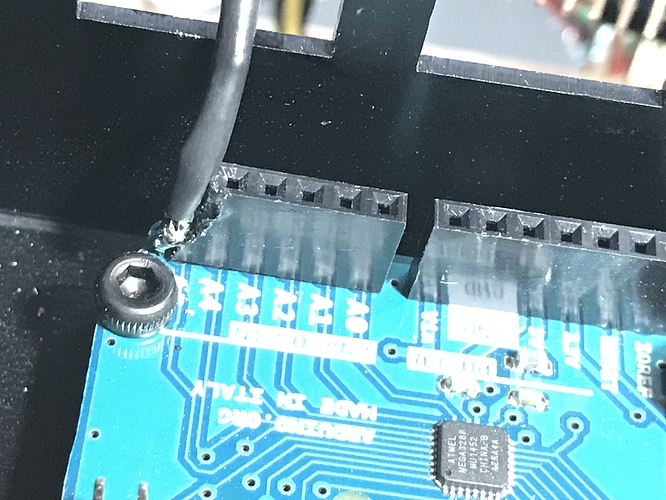 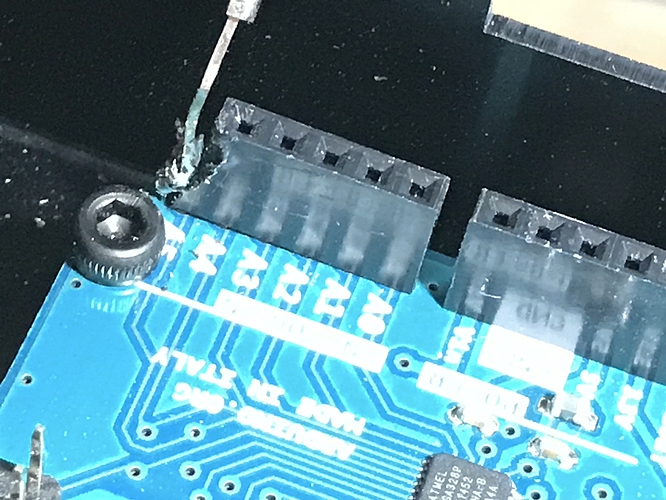 I would love those screw connections… gotta figure out a way… may have to do a custom enclosure. Thanks.

In the short term just take the whole pin out and solder a wire directly to the board.

At a later time you could replace that stackable header.

@Jason Can you get a pic of the bottom of the board?