Hi,
I’ve found a few tutorials on how to do the rest machining for 3d toolpaths. I cant find a proper way to do it in 2d contours.
Does anybody have a solution?
I have lots of parts where I need a smaller end mill for finishing the corners etc. I dont want to run a whole program on one cutter.
Thank you

I think that Aspire is like V Carve. You can create multiple tool paths. When you generate a new tool path, it is generated with the assumption that the preceding tool paths have removed material and the current toolpath only needs to deal with what’s left.

I usually generate a first path that cuts around the outsides of the parts leaving tabs. Then I run a rough pass that puts the basic shape onto the part (usually using the same tool as before). Finally I run a finish pass with a different bit that cleans everything up. If these are in the correct order in V Carve, the finish pass will know that material was removed by the first two passes and the finish toolpath will only have to deal with the small amount left.

When it comes time to generate the G Code, you can send it out as one file with tool change pauses, or you can make it output the different toolpaths as separate files.

I usual do the first two steps with one tool and export that as one file. The finish pass I export as a second file. That way I can run a whole batch of work pieces that all get rough machining without doing tool changes. I then change the tool and run the finish path on the batch.

I’m a bit confused here.
Is this not the same as a pocket cut in Vcarve?
The first (larger) tool removes the majority of the material and the second (smaller) tool picks out the corners.

The only problem with finishing pass is that you need to run the small cutter through the entire workpiece. With rest machining the cutter would only go to the corners.
That option to remove the material first with bigger tool is only for pockets. Ive tried to simulate it bit it also creates a long toolpath (not only the corners).

I thought that there was a feature in Vcarve that let you draw a box around the area where you want the action to take place. Using that, you could stop the small cutter from passing over everything.

What if youre cutting an art? You’d need to spend quite a long time to select everthing.
I was thinking to use a different software for that but big cad/cams like Fusion 360 dont really support dxf’s. Lots of problems.
I am trying to import it to CamBam, there is a script called unmachined areas. It creates a layer with all the areas that cant be machined with a given tool dia. Then I can open it in Aspire. But Im testing it now.

I have VCarve Pro and I’m sure Aspire is the same. For example, if you pocket an area, you identify the bit you want to use and you can select a larger bit to do the clearing when creating the toolpath. The function is called “Use larger area clearance tool”. It will create two toolpaths one for the larger bit is called “clear” and the other. The larger bit will do the bulk until it cannot get into the small areas. The toolpath for the smaller bit will NOT pass over the already cleared portion. The smaller endmill will only mill the portion not already milled. See the picture below where I selected the function. (You have to click to see the whole picture. 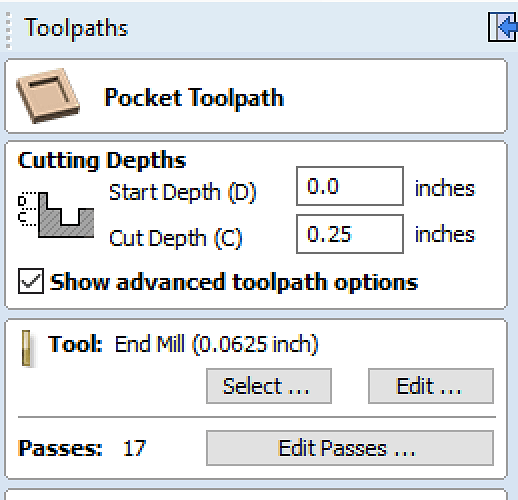 Hey @LucFournier,
The cut in question is a profile cut, not a pocket. Do the same options exist?

Yeah, unfortunately it works only for pockets. I know some guys add an offset and run profile as an pocket. Anybody does it? But then, it really takes time.

The option exists for pocket and VCarve not for profile toolpaths sorry about that.

However, if you wanted an inside corner profiled with a smaller bit on certain parts of the profile, you would have to do this manually but it would not need to pass over the whole profile. To do this you can use the draw line or draw arc to create a profile over the original for these corners and create a toolpath with the smaller bit for these portions where you want more detail.

Maybe there is another way but this is the best I have found.