Attaching a pen to spindle mount?

One of the things my wife does in jewellery is add resist to copper and then etch it using electro-etching (salt water and a D cell battery). Adding the resist by hand is prone to errors especially with geometric shapes.

So we were thinking, strap a pen (we use Sharpie Paint Pens for resist) to the side of the spindle using the three open screw holes. Then “carve” using the pen instead of the spindle to lay down the resist and use a design from within Easel. I.e. turn the X-Carve into a plotter

We have tried machining the design directly into the copper but problem is, it looks too machined and doesn’t have the surface finish that etching gives. E.g. below is just a test piece I did while setting up a new electro-etch tank (hence the design being awful) but I hope you can see the effect the electro etch process gives.

So does anybody have any great ideas how to mount a pen to the side of the spindle holder? Would obviously only be fitted while applying resist and removed for carving using the spindle. 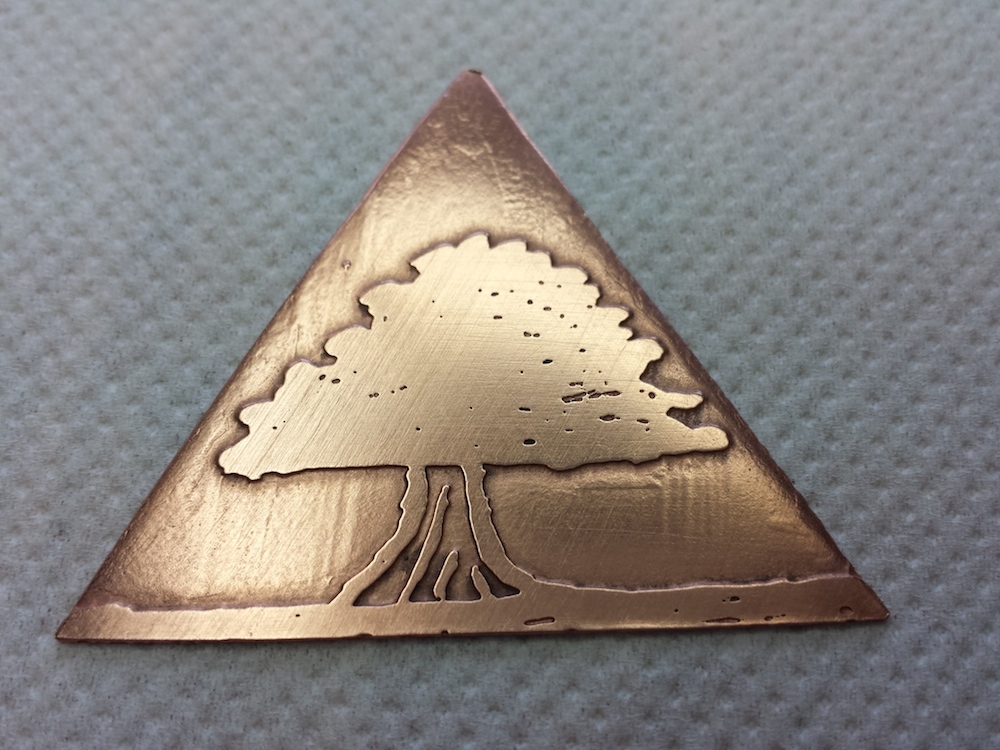 I think a pen holder would be a good bounty project…

Seems like that could be easily printed, even incorporating/eliminating the spring by thinning the material down between the spindle and pen area.

Similar situation with a drag knife (just in that I want one of those, too).

I support the input- I would also like to drag a pen, and a knife, around my table at some point. It might be pretty cool with tool (pen) change out to create different designs/projects.

I just threw this together really quick so the dimensions likely aren’t quite correct, but something like this in Easel should work.

I started playing, too… 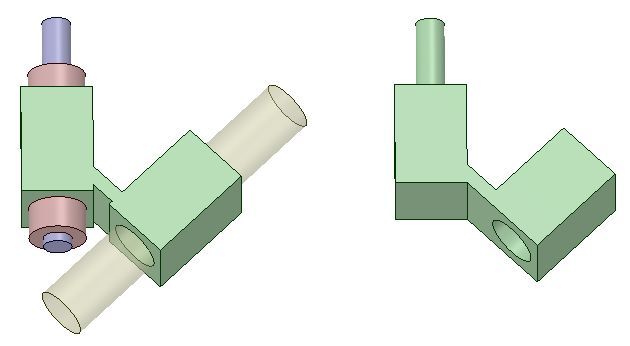 Coil-over Pen for CNC Plotting: I made this pen holder for my DIY CNC when I was at the Detroit Maker Faire.  I plotted mazes and invited kids to solve them by using a Playstation controller to drive the machine.  This pen design allows for...

Brian Grunblau has created a DIY cnc machine and an awesome kit with his platform cnc. He has some good instructables for a pen plotter, touch probe and drag knife

I did this to play around when I first got mine, but I just used a few strips of masking tape on the side of the spindle mount… worked like a charm.

Today I made a pen holder from a scrap of angle aluminium. Three M4 holes drilled to mount to side of the spindle mount and pen held in place with cable ties. Tested with a permanent ink marker but will be used with a paint pen to draw designs directly onto copper. This can then be electro etched those time when milling won’t do the job.

Hope to try this tomorrow.

But here is some pictures and a scrap of video. 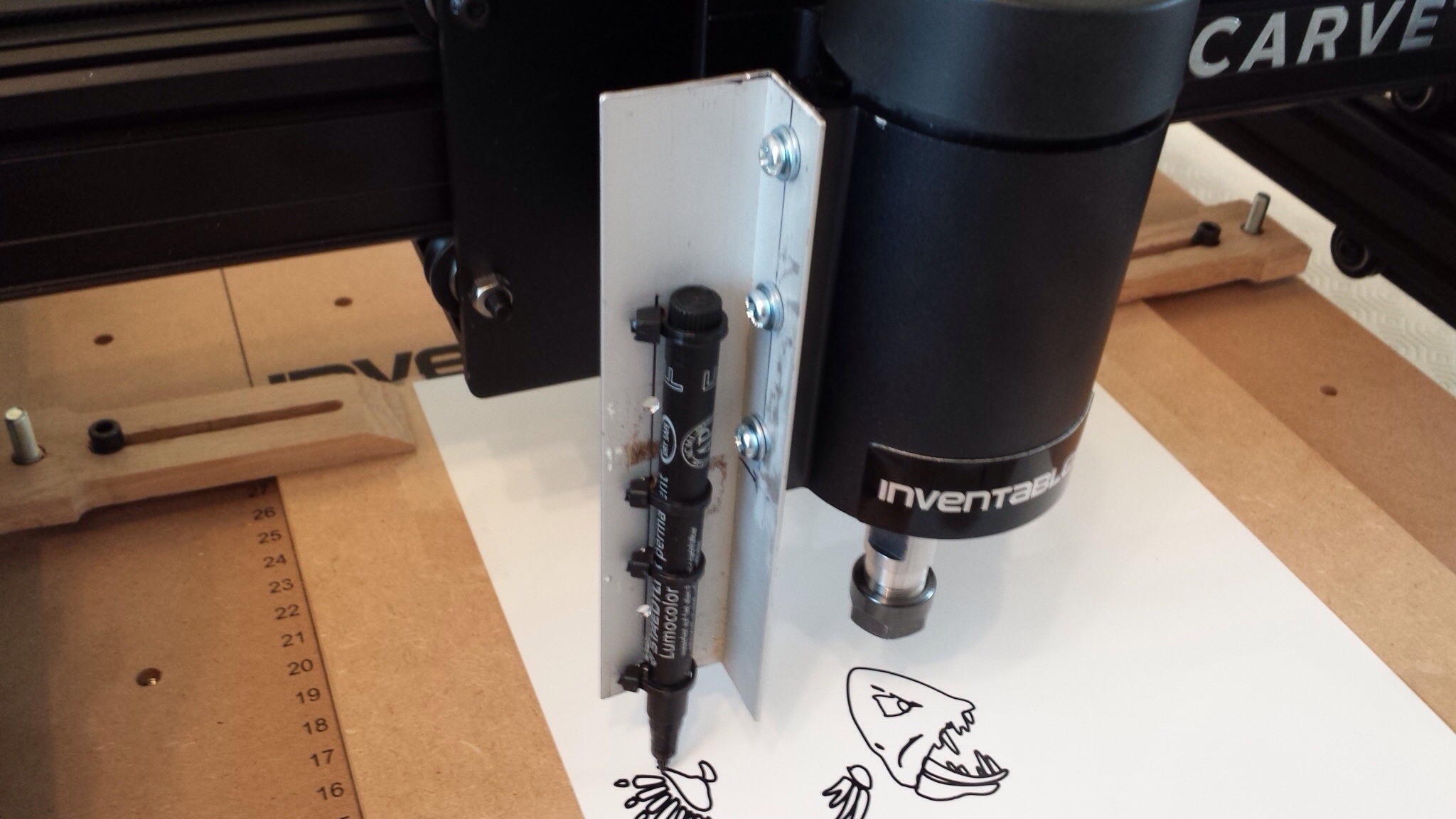 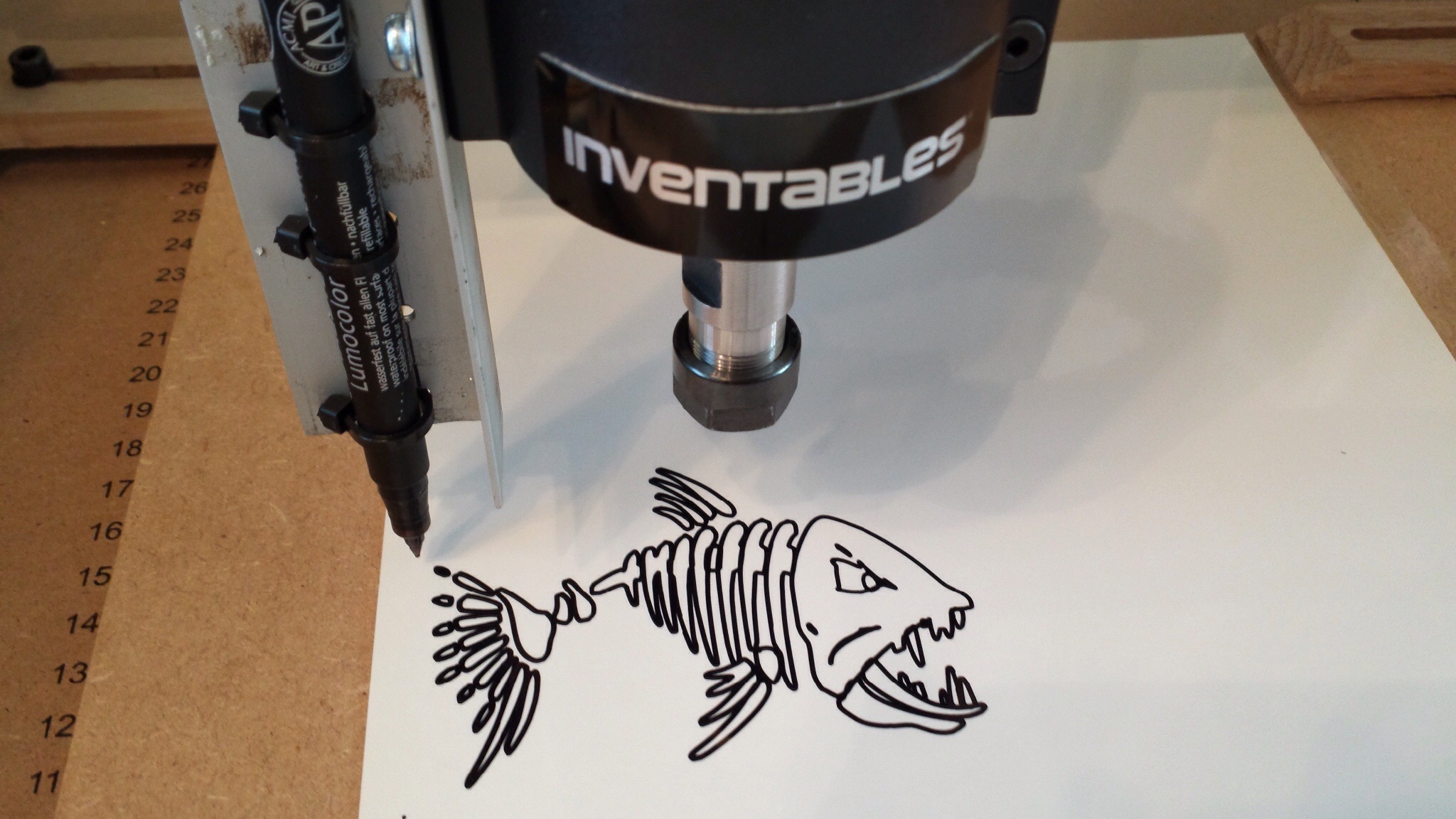 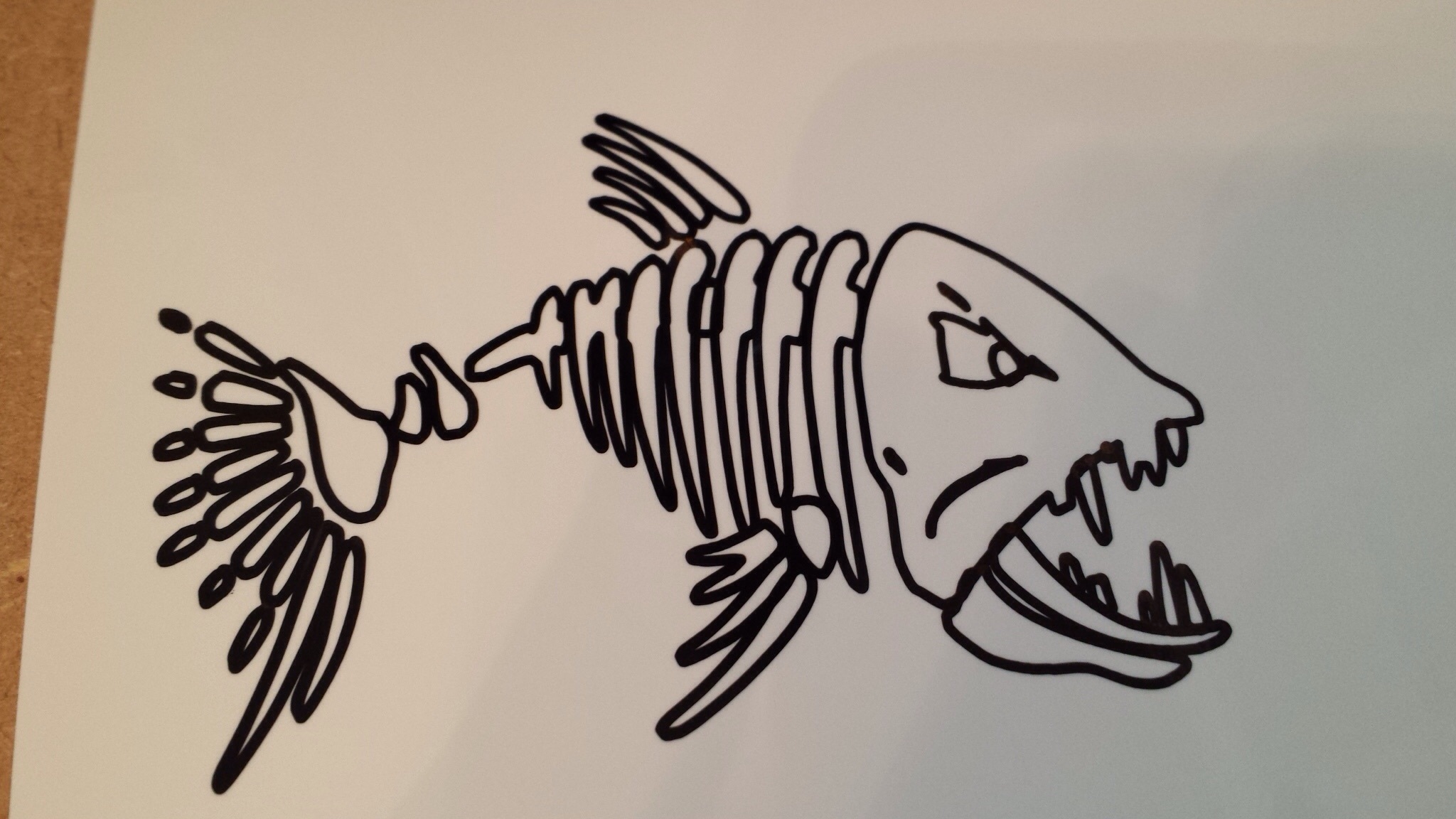 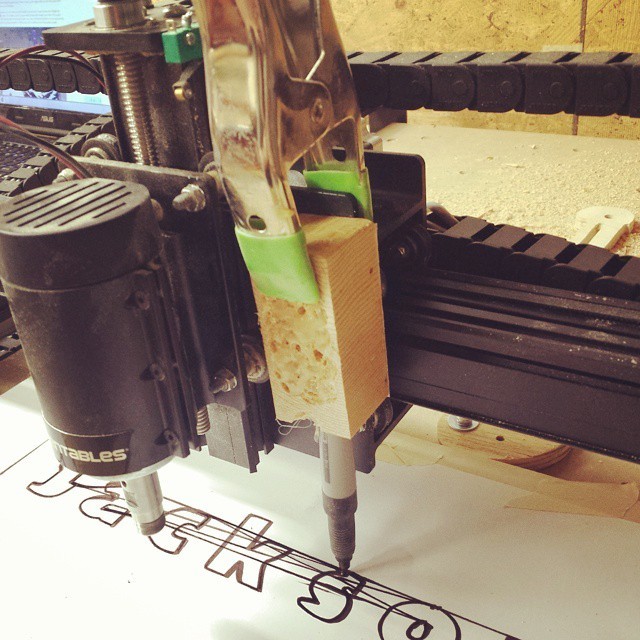 tried hot gluing it on first but that didnt work that well. double sided tape work pretty well though

I struggled with this for a while after creating a mini-maker-slide-drawing machine. I finally created a spring-loaded contraption out of aluminum angle, a couple of linear bearings and some HDPE. The HDPE holds the pen tight and perpendicular. You can see how the pen is free to travel - I needed this because the “mini” did not have a very flat wasteboard.

This video was shot PRE-x-carve, but you can still see some very familiar components.

Are those plastic pieces sliding along two shoulder screws bolted into the aluminum angle?

Bronze bushings are embedded in the plastic. The bushings slide up and down on the shoulder screws. It is NOT easy to get it all lined up and dialed in. Once it is dialed in, the spring is not really necessary because the weight of the unit applies enough pressure on the pen tip.

Interesting. I would think with shoulder screws like these, you wouldn’t need bushings. Are they just to improve the perpendicular accuracy of the pen holder?

You need really tight tolerances and very little friction. Hence, the metal on metal AND the difficulty lining it all up. That pen tip is about .3mm so any slop really messes up your drawing. Especially on fills. Eventually I ended up with perfect fills. It almost looked like commercial printing, but with marker ink. The effect is really cool when you taka a half-tone photo and just use black marker.

How exciting! I’d love to try making a really nice floating pen holder like that for the X Carve. The results you got are great.

I make wooden pens, I get my kits from: https://www.pennstateind.com/