I made another video showing the scripting details. I’ve also added the ability to specify the bit size at the beginning since the XYZ zero point is bit-size dependent.

QuicKeys is also available for Windows and works pretty much the same way, although the interface is different because it’s an older version. Their site says it’s for Windows XP, but I installed it on Windows 7 64-bit and got it working just fine.

if he posted it at a TGIFridays is it ok that it is Thursday?

I was considering on doing that at one point but started using UGS and gave up.
Glad you didn’t.
Congrats on the cool trick.
This needs to be put on a the board as a sticky. That way you can see it when you visit the forums.

I’d like to see Inventables incorporate this into Easel. It could be added to the Z-probe screen. Leave the Z-probe option available, but also offer a 3-axis probe. Since the bit size is already known because it’s entered in the settings, it would work just like the single Z-axis probe. Ensure the bit is located properly, then click ‘probe’.

The 3-axis touch plate dimensions could be added as part of the machine setup just like the z-probe plate is now.

It’s not rocket science. It should be easy to add…and it would knock Easel out of the park!

Continuing my effort to make the 3-axis automation more seamless in Easel, I’d like to figure out how to ‘read’ the current “Bit Size” and eliminate the operator from having to enter it in the QuicKeys macro.

If you look at the Inlay App in Easel, it does use the Bit Size, so there must be some way of reading that value. If so, then we should be able to use it and then the 3-axis probing is just as automatic as the single z-axis probing. 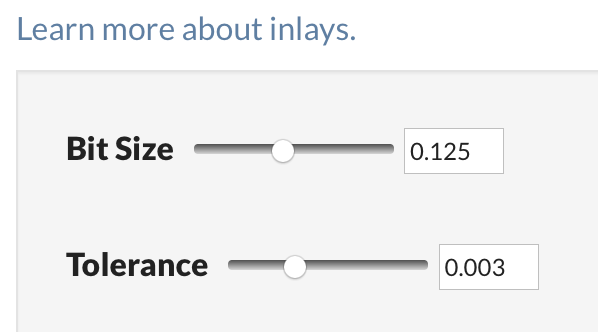 I’ve been playing with a thought here. Since Easel already understands homing… how much more work is it to use those switches on a plate the easel can read as your xyz zeros. Hope that makes sense.

In other words , instead of mounted homing switches, couldn’t they be mounted a like charleys triquetra block for easel positioning.

homing is a GRBL function. It’s a black box to Easel (send $h wait for an “ok” response). Theoretically you could use the homing function to set your work zero (it’d actually be setting the machine zero however) but that’s not the true purpose and it can cause other complications (parking when pausing with an Xcontroller) plus you’d need to alter the default settings to change the Z direction for homing.

Using switches for probing is technically possible but you’d be using the same commands and potentially adding more sources of error as you’d basically need to do a multi-tap of a switch to find the true position. But the same commands still would need a different sending mechanism than what Easel does without this workaround.

Hey @Traxxtar this is great. It’s exactly what I’ve been looking for. Would you be able to share your script for QuicKeys? Does that program have an export/import option? Thanks.

I believe it has an export/import. It’s on my Mac Mini at home. I’ll check tonight and let you know.

@Traxxtar Following with interest here, albeit an older post, did you manage to export the script for quickkeys? I’d like to use Charlie’s 3 axis block with easel and utilise your script.

This is from the Mac version.

Thanks for that, I run PC but will see if it works!

I created one for Windows…let me see if I can find it.

Thanks that would be great!

I could not locate my Windows version. That, along with some other Arduino code I must have deleted…are really not setting well with me today! Arg!!

I wish that Charlies 3 axis block could work within easel since that is the only software that I use for now. Traxxtar, it is too bad that you couldn’t find the script for the windows version, thanks for trying!

You could just program the Windows script like I did, it’s not hard. Did you try importing the script I made for the Mac version into Windows? I don’t know if that would work, but it might. You might also contact the company who developed the app and see if they have a converter.

I use my 3-axis auto probe all the time in Easel with QuicKeys, it’s a huge time saver.

no I haven’t . I will try it sometime today an see what happens. I was just following this thread and I thought it was interesting that the block can be use through Easel. And you are right, its gotta be time saving! Thanks again Traxxtar!

I have finally found some time to start working on this 3 Axis zeroing inside of Easel. The Christmas sale kept me working every single day since Thanks Giving and that included Christmas day all the way up through the first week of January.

No that I have taken some time to work on it I think I have come up with something that will allow Windows users to zero all three axis inside of Easel using script created with AutoHotKey. It isn’t quite as slick as the one by @Traxxtar but the cost is $0.00. The program he used is available for Windows XP and according to him will run with windows 7 but I tried it with Windows 10 with no luck at all. Even if it would work it cost about $45.00 if I remember right and I don’t think too many people are going to want to pay that additional amount.

So anyway, I have a working version of the script and have had it tested by one other Easel User and he tells me that it works just fine. My problem here is that I am writing a script for a machine that I don’t have. Yes I do have a 1000mm X Carve but it has been converted to Mach3, so I can’t test it myself.

I would like to connect with some Easel Users who would like to test it since I can’t. My plan is to incorporate the generation of the script into the Triquetra Tool Box so when the end user creates his or her script it will be created for their particular touch plate. One of the beauties of this is that you will only need one file for all of your various bits.

I am hoping to get the new year started off right. by introducing Easel compatibility to the Triquetra Arsenal so that Easel users can enjoy the benefits of 3 axis zeroing.