When I run the Machine Setup routine, and I select DeWalt611 as my spindle, and Automatic Spindle Control, when it generates the code it sets the M3 value to 1.

It seems to me that 1 wouldn’t ever really be the right value there.
• If a user has the DeWalt but no relay or external PID, they wouldn’t set the spindle control to Auto. Even if they did as a mistake, sending the voltage down that line shouldn’t cause any problems. In the X-Carve build instructions, or in the setup routine in Easel, it ought to specify that the DeWalt can’t be controlled through Easel out of the box.

• If a user has the DeWalt and selects Auto, it should be assumed they either have a relay or PID, and should either allow the user to set a value for RPM/voltage, or select what type of control they want.

This would also allow the use of M03 instead of M3 S(XXXXX).

My main gripe is that in order to use my DeWalt router with a relay in Easel, I have to select “other” in the machine setup dialog in order to specify an RPM so that my relay will work.

hi Mike you are saying if you hook up a relay Not PID as if you a 24v spindle the relay will not turn on, I was going to used the the spindle output from gshield to turn the 24 v “on” for the relay

If you select the DeWalt 611 as your spindle, that’s true. It will turn on when you test the setup, but not when you go to carve something.

This is because during the setup routine, the testing procedure turns the spindle on at full power, but then it sets the default RPM to 1, which won’t turn on the relay.

If you want to use a relay with your router (as I suspect most people do) then you need to select “Other” as your spindle and then it gives you the option to enter an RPM max. Put any number over 12,000 there, and the relay will work just fine.

ok thanks that will help , I was really hoping to be able to enter motors on and off as I have in my 3d printers…

Easel uses M3 to turn the spindle on, which expects a the parameter S for speed. So you’d need

to achieve the same thing.

The trouble I’m having is that when Easel generates Gcode, if the DeWalt spindle is what’s set, inside the header it has

Which will not turn on the relay.

The trouble I’m having is that when Easel generates Gcode, if the DeWalt spindle is what’s set, inside the header it has

I would send a trouble report to Inventables.

If it were a “Hey I can’t figure this out” kind of thing, or “My personal machine broke” I’d send a report. But I think, since the RPM dialog used to be in the Machine menu but has since been removed, that it was a conscious decision or oversight on the part of the team. In my opinion it’s silly to be like “Well I have a DeWalt spindle, and they’ve gone to the trouble of coding Auto Spindle Control as a preference, but I can’t pick that because it won’t work. Instead I have to pick a generic spindle and hope that they didn’t code in other characteristics of the DeWalt that I don’t know about.”

I say this because when I first set up the DeWalt, I could swear it was moving quite fast through the material compared to the 24V stock spindle, but since they’ve changed the dialog and I’ve had to go to “other,” the feed rate seems to have gone down. It says they’re the same in Easel, but my Butt Dyno tells me otherwise.

I had this same issue, and complaint. We should not have to select Other when there is a selection for the 611.

This is definitely something that should be corrected.

I would need a separate 5v power source to run the coil side of this relay bank?

I want to drive my dist vac and run the dewalt611 and a small powersupply for additional LED lights.

Thanks Phil. I looked at the wiring diagram, and Apart from the switched signal, the relay board needs a 5vdc, I’m assuming to run the optoisolators etc.

Any thoughts on this? Or perhaps a link to a spec sheet/ Wiring sheet for the x controller?
This is the diagram I am basing my question. 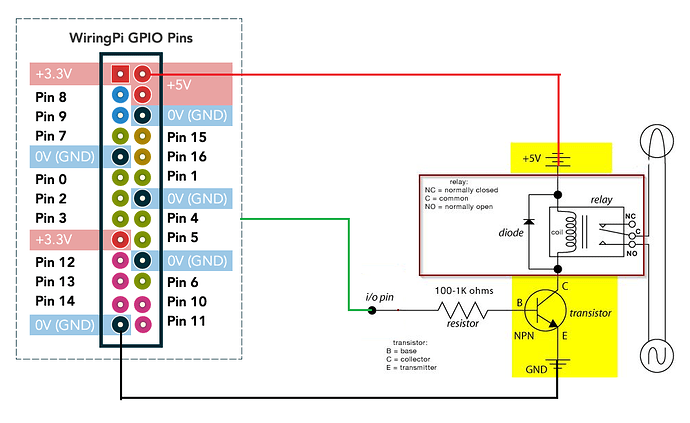 I looked at the wiring diagram, and Apart from the switched signal, the relay board needs a 5vdc, I’m assuming to run the optoisolators etc.

The diagram uses a standard mechanical relay and does not have opto-isolation.

The Inventables Relay device cannot handle the current requirements of the equipment you want to run.

Thanks for the expert guidance LarryM.