Before I do a bunch of troubleshooting, can anyone enlighten me on why I’m not getting a finished cut in the bed of the carve? The problem is not consistent, I can cut the same design twice, one might be clean, the other not. I might get a production run on this with a local sauna manufacturer. I have the carve time down to less than an hour, which is great, I think. Granted, this is done in cedar which is soft and won’t be that big a deal to sand, but the less cleanup work I have to do means less time on each piece, which means I can keep the price down for the customer. 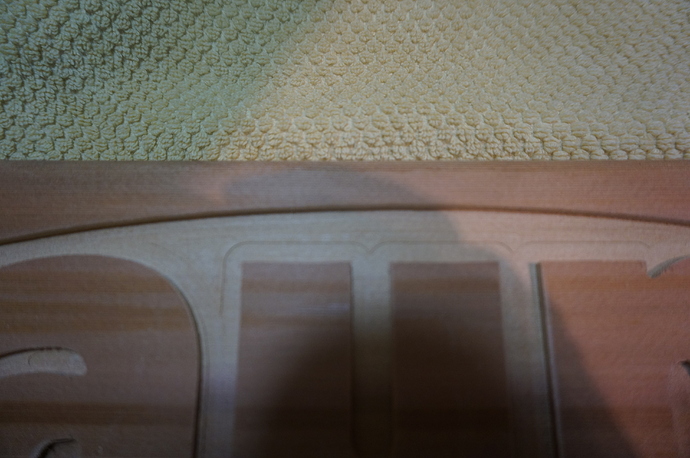 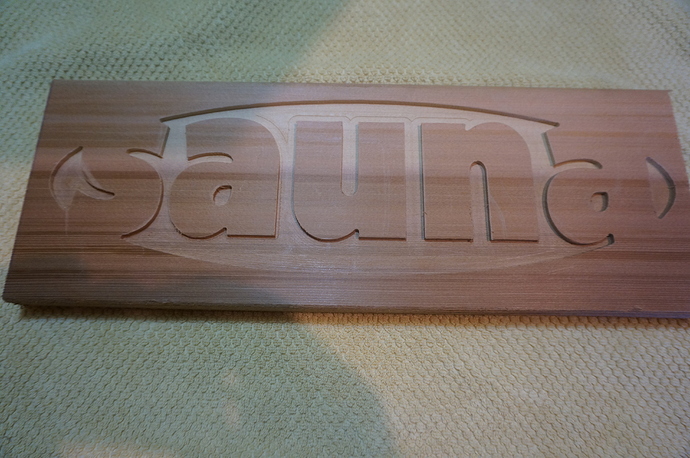 Are you using Easel and detail cutting path? If you are doing a bit change it could be as simple as your z-zero being out just slightly.

I know some people have had some sticking issues with their delrin nut. Might want to try cleaning and lubricating the nut and rod with some dry silicon lubricant. You said it’s intermittent so that kind of rules out an un-level bed, maybe slightly adjust you Z-Axis stepper pot up (that is if you are using a g-shield).

Also, make very sure that your collet is snug. It’s possible, particularly for an up-shear cutter (but also possible with a straight), to have the cutter slowly work its way down in the collet.

Thanks, Rusty! Stroke of luck to find this potential project. Just stopped in the store to get some scrap pieces of cedar since that’s what I’m interested in working with primarily. Got to talking with the owner about the router and he showed me the sauna signs one of his worker cuts with a band saw and finishes by hand. The guy hates to do them he tells me, so he said come up with some designs, he’ll see what he likes and then he’ll place a stock order for his website. Plus, he’s got people coming in all the time for sign work, which they just don’t do. Score, huh?!

thanks Dan… I’ll check on that.

Right on! That’s great being able to find something like that! Maybe I’m going to have to go start talking to some local businesses!

I was at a pub one night a few weeks ago which was showcasing a local brewery and I started chatting with the brewery sales rep. They ended up hiring me to make some beer sampler trays engraved with the company logo. My wife looked at me like I had grown a third eye and said that she’d never seen me be a salesman before. I replied that I wasn’t being a salesman, I was just talking about something I love to do, and if I can get paid to do it, then great…

Just bartered a quick sign I made for a large pizza tonight, with the owner of the pizza place.

This should be a Meta thread that in some way is supported by an Inventables contest so that more people can make their machines pay for themselves ipso facto Inventables sells more machines!

Or at least be fat and happy like @DanBrown

I agree with Tim; however, it is a current adjustment. I had to adjust for my Y-axis. Oddly, my carved fine on the test project but failed for others.

Haven’t done a carve since I posted this, but it sounds like I need to try the current adjustment… I’m going to guess the adjustment will be slight. what direction and how much? I’m assuming clockwise.

Clockwise and probably just a bit. There is some post on here about adjusting the pots, but the Z-axis is a bit tricky just adjust it a small amount, and it will probably be good.

Read somewhere that you turn it up until it doesn’t work well (it goes into thermal shutdown, and stutters badly) - then back down until it is smooth.

Ya that is the typically way to do it, it’s just a bit difficult to do it on the Z-Axis as you have very limited travel.

In Easel, Ive had an issue maintaining depth of all the objects in a carve unless I select them all, and then set the depth. If the letters are off by .001 in depth from the depth of the inner carve of the oval, youll get what you see.

yeah, that’s not it, but thanks. The problem is inconsistent. If i do multiples of a particular carve, one might be clean the others not. Or in different areas. the happens on different designs also.