My x-carve is rather new - got it back in May. It prob has no more than 8, possibly 10, hours of carve time on it. Early on I tensioned the belts and was going to again soon as, it is my understanding, they will stretch.

In the middle of a lengthy carve today the x belt broke right at the x motor’s wheel. (Is that typically where a break occurs?) The belt itself shows no signs of wear or stress.

I don’t remember what I tensioned it to but wouldn’t have done more than I read here in the forums. The beltless carriage move freely and smoothly and I don’t feel any resistance. Any guesses to what happened? Possibly a flaw in belt manufacturing? I doubt it but I guess that is always a possibility. 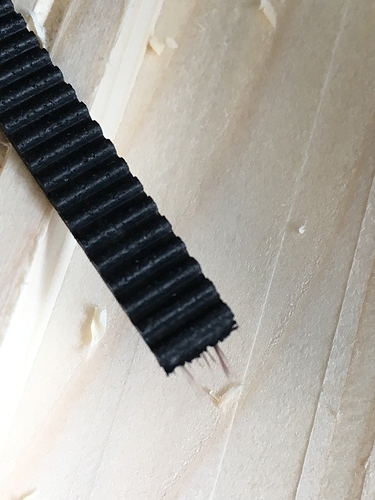 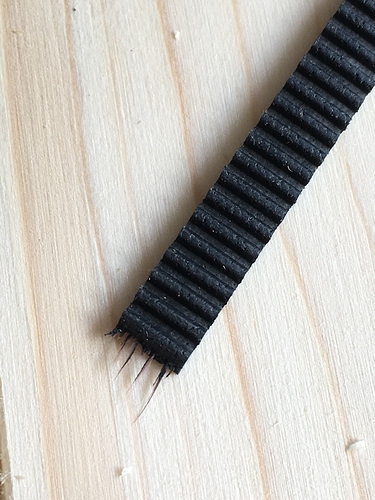 The result of carving multiple passes in the same spot - 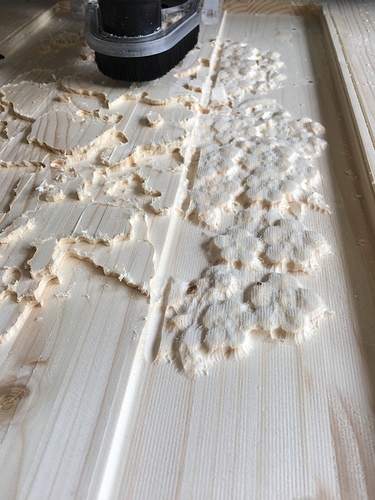 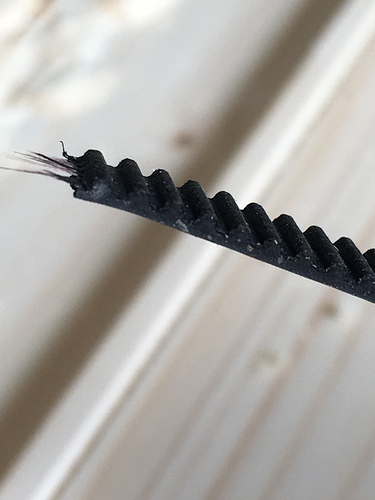 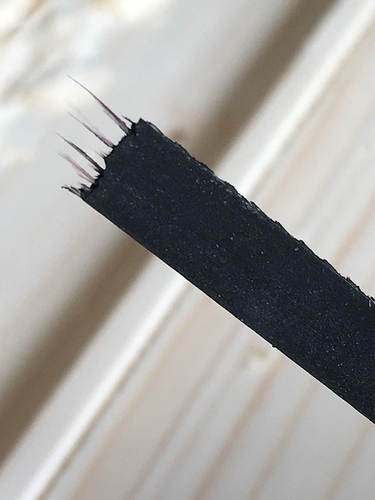 when you replace the belt, ensure it runs in the centre of the wheels. My belts have been going strong for a year and a half

Will do. I can’t say what mine was doing as I never specifically looked.

The wheel does have a dark mark around it. Maybe it is the edge of the belt? If so then it was riding off center. 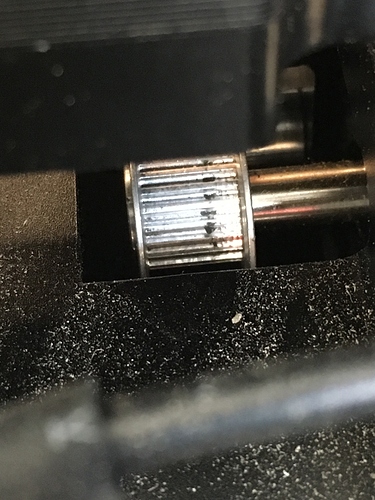 The new Xcarves don’t let you align the belts and the pulleys like the old one used to since the pulleys on the motor are pressed on. Check your idlers just to make sure though.

It does look like maybe you were riding offcenter. What I found is that when I put the belt on the pulley originally, I could set it where I wanted it (centered) and as long as my idlers were aligned (which they should be), it didn’t drift from where I put it.

Seems like it is too tight. I broke several belts like that because I was overtensioning them when I first got it

What tension do you set yours at?

There’s no way to make the new x-carve belts ride in the center they always touch the side of the pulley and rub in one side of the belt. I have tried everything to fix this issue. I just ordered extra belts…,

I adjust it by eye… and a lot of trial and error. They don’t need to be as tight we think. Keep on adjust and checking with a engraving bit and a metric ruler. I got one off amazon that’s 600mm long. At least that’s how I did it till I got it to what I believed to be a good tightness.

Keep in mind that my method is probably not the right one, but it’s what worked for me

4.5 lbs measured with a luggage/fish scale and 1 inch of belt lift at the center with the gantry/axis pushed all the way to the fixed side of the belt.

4.5 lbs measured with a luggage/fish scale and 1 inch of belt lift at the center with the gantry/axis pushed all the way to the fixed side of the belt.

Yup, exactly what I did.

Keep on adjust and checking with a engraving bit and a metric ruler. I got one off amazon that’s 600mm long. At least that’s how I did it till I got it to what I believed to be a good tightness.

That is what I did when I calibrated the motor’s step-per-mm setting but that is different than belt tension, right?

Call Inventables customer success before placing an order. That new of a belt shouldn’t have broke so they might replace free of charge.

What were you cut settings and what material?

Correct. But it’s also helpful for possible visible backlash. I just kept tightening till I could discern a difference and the results were repeatable

You adjust your belts till they match the default steps/mm? It’s way easier to set them to a set value and then calibrate your steps/mm.

What were you cut settings and what material

Cutting pine. Brand new. .25 ball nose and, I believe 80ipm. It was a finish pass on a 3D relief. It was removing very little material and moving without any obvious resistance.

I’d say high likelihood of manufacturing defect then. Maybe someone knicked it with the cutters and forgot? Definitely call Inventables.

No. Adjust until backlash is gone. Then adjust mm/steps

So far just one … but I won’t be caught without extra belts again. It broke in the middle of a large carve looked just like yours.

Not sure of my exact feeds/speeds but I know it wasn’t anywhere near that.

When I break a belt from too aggressive of a cut, it looks like it was pulled taffy right by the break.

Mine looks like the taffy analogy but here is where I struggle with it being too aggressive…My carve was running front-to-back (along the y axis) while stepping right-to-left (along the x axis). Meaning it would cut a full run along the Y and then take 1 step on the X to run another full run on the Y. In my novice mind any aggressive movements would have been along the Y axis. Not to debate that point (as it could have been the reason and you have way more experience than I do) but that just does not feel right to me.

To help demonstrate my poor attempts at describing movement and direction, here is a video of it shortly before the belt broke.