Best approach at this piece?

Hi! Agreed to make this #23 sign as a gift for someone. I’m still fairly inexperienced with my xcarve and i’m having trouble designing this piece in easel. Any suggestions?

here’s what I have so far: http://easel.inventables.com/projects/gzBDcweZMuvo5oDwxtkXLg 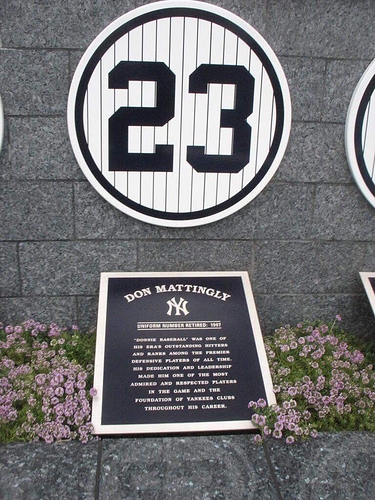 WELP, that’s awesome. Do you mind explaining to me how you did that?

practice the method and you will get the hang of it.

what you are doing is trying to stack the cuts as needed so that they come out the way you need without making several different designs. (one line from top to bottom).

You may also want to ask, if the number is supposed to be raised, or inset… visually I can read it both ways, but the client may have a specific orientation in mind

More or less what Kenneth said.

Then I took your text and used the exploder app. The original has a bunch of blank space at the top that I didn’t want. After it was exploded, I selected both numbers set to 1mm depth and centered the selection at 0,0. (Note, the numbers are now shapes and not editable text.)

I added another circle of 185mm diameter, set depth to 1mm and centered it at 0,0. Then used the EDIT menu and sent it to the back.

I added another circle of 195mm diameter, set depth to 0 and centered it at 0,0. Then used the EDIT menu and sent it to the back.

I then took your middle line, set the depth to 1mm, made the length 175mm, and centered it at 0,0. I copied and pasted the line, changing the X location by + or - 10mm each time until I had the lines that I wanted. After this, I adjusted each set of lines so that they ended between the 175mm and the 185mm circles.

I selected everything and centered it at 150,150 (This could be anything, but you had it out in the work area rather than at 0,0)

I duplicated the workpiece. In the second workpiece, I selected everything, then deselected the outermost circle and deleted everything else.

Next, I selected the remaining circle and set it’s depth to the maximum which you had at 12.7mm and then removed the finishing bit.

I was doing the same when you posted your file.

no need to double the answers. 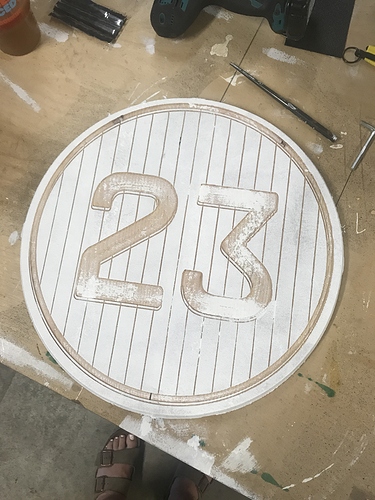 So I had this problem when I cut it…it seems like after I put in the 60 degree bit, something shifted. When I hit “lock motors” on the program, they don’t actually lock, so in an effort to prevent them from moving I’ll have someone hold the carriage for me. I know I’m missing something here as far as accuracy with 2 but cuts…

This will walk you through what Robert is talking about.

Also may check if you have Power save enabled/disabled on your 4 pin. When machine is idle, such as during a tool change, power save reduces power to the stepper so its easy to move your axis.