So I often get bogged down trying to determine which bit size Easel wants me to use when it gives me the “your current bit too large for the current project” error. I end up just dragging my project bigger and bigger, waiting for it to go away on projects where exact size isn’t important.

Would is be possible to have the same error box say the what the bit size I would need to use in order to complete the project as drawn? I think that would save me tons of time, rather than trying to guess through trial and error.

A step further would be to have an option to select bit size and Easel automatically size out your project to make it work. ( I imagine that would take a lot more programming, but just a thought.)

Thanks and I appreciate all the continued hard work that makes Inventables the amazing company that it is!

While we’re asking about bit-size stuff…

Could Easel display the places where the selected bit is too small, so the user could address just those places?

Could Easel have a “fix it” option, where it would automatically enlarge the too-small cuts, so the selected bit would fit?

(Either could be an app, not necessarily integral to the Easel main program.)

We actually already have a warning system that tells you when your bit is too small. The areas are highlighted in red on the 3D preview. Also there is a warning box that says “The current bit is too large to carve some of this design”. That warning also appears in the walkthrough when choosing a bit: 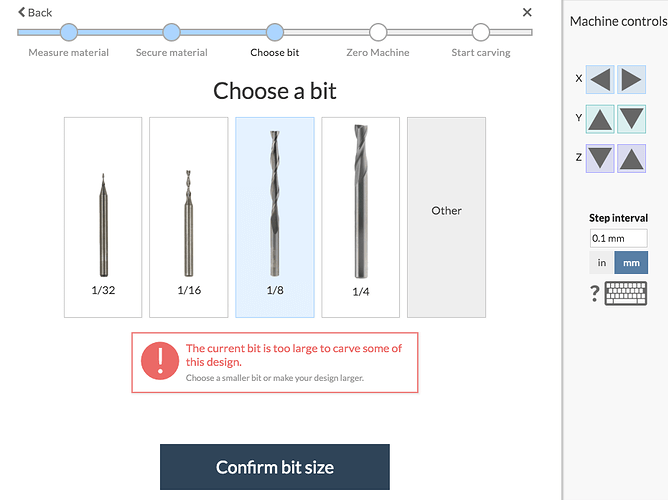 I’m not seeing that. Here’s what I see: 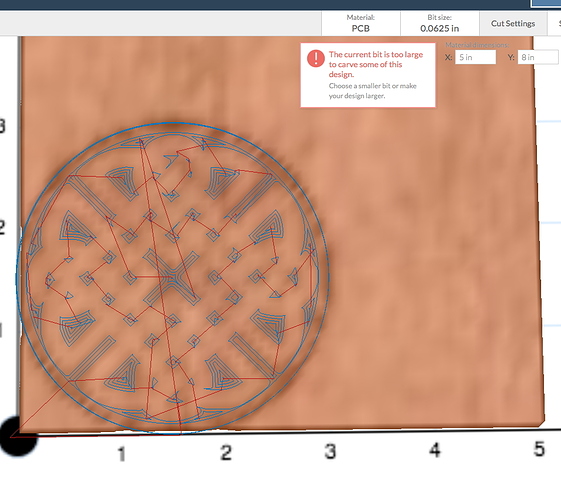 So, I guess the red lines are non-cut moves, which include both the normal moves and the “cannot cut” moves, right?

Not to put too fine a point on it (Hah!, see what I did there?), but that is not as helpful as it could be.

Looks like you’re still getting the warning message, but there isn’t much (if any) red displayed on the preview. There is definitely room for improvement.

As always, clicking “Show toolpaths” and reviewing that is always the best way to verify something will come out the way you want. Clicking “Remove material” helps you see whats happening at each layer too.

That warning is telling you a round peg will not fit in square hole – A round bit can not make a clean cut in a 90 degree or less angle in a corner no matter the size, it will always leave a little material

Were that the case, one would ALWAYS see the message for any design that included an inside angle, up to the limit of tolerance/precision. I have not seen this; maybe I’ve missed it.

(1) What size bit would work?
(2) Show the “impossible” places on the drawing (or a copy).
(3) Offer a user-selectable operation to “fix” the drawing (or yield a fixed copy).

Here’s what I do now:
(1) incrementally shrink the specified bit size (but not the actual bit) until the warning goes away
(2) run a real test cut to see if I can live with the result

It would be nice if I could see the result without running a real cut.
When a smaller-than-actual bit is specified (i.e. when I lie to Easel) cuts are less efficient, because they are multi-cut. Also, the actual cut-out areas are larger, by the difference between specified and actual bit-diameter. However, for many of the things I do, these differences don’t matter much or at all. The cuts just take longer, but the results are acceptable, so if Easel could just “do the correction”, that would be great. Hey, it’s art - I’m not doing precision machining for a life-critical application here.

I get that message on 95% of the things I’ve cut, they cut fine I just know that the angle cuts less than 90 will not be as sharp as they could be. And yes it’s art so I’m happy with what I get

On a similar note, I would like to see a bit size override.

I have been carving some text lately using a script type font (think cursive) with a 1/32" bit. If the line is too narrow for the bit, just carve a single pass.

I believe changing the milling operation to ON PATH will do exactly what you are suggesting…
The machine will cut out the path, ignoring the bit size.
Unfortunately either the CAD program (or the user) needs to know this when designing something. Otherwise the outcome may look funny.
This is exactly why using v-carving techniques is so popular. A V-Bit can be used to carve text large or small.